How to use my hdd from windows on linux without a format?

Hey everybody its me again,

i wanted to start to “transfer” my first hdd/ssd over to manjaro. But i tried things out at the beginning and manjaro told me when i wanted to install something on my “windows drives” (they are ntfs formated) that this wont work and i should not do that. So that means in my pov that i have to format all my disks to an linux supported format. Which is something that i dont want to do, there is so much stuff on there and i dont have externals big enough. Is there a workaround?
Thanks,
best wishes.

It’s difficult to interpret what you’re trying to do.

Are you trying to access your files on the NTFS partition to be able to copy them over to your Linux home partition?

Are you trying to use the NTFS partition in place of your home folder, and to keep using it to manage your files? (Read, write, modify, delete, etc).

Are you trying to use your NTFS partition to actually install software to?

In my pc are multiple Drives (hdd’s and an ssd). I always used windows. But since i started Manjaro (Linux) i begin to like it more and want to use my Hdd’s on Linux. But my Drives, which are still at windows, do have datas that i cant safe due to not enough External drive space to back them up. So i want to use my Drives as i did on windows. Write on it , read it , delete from it etc.

So i want to use my Drives as i did on windows. Write on it , read it , delete from it etc.

You can do this either by allowing the desktop environment (DE) to handle these HDDs as user-mountable devices. (You’ll see them in the tray and side-panel of your file browser.)

Otherwise, you can use the fstab to properly mount them at bootup, with full read-write access.

However, since they are NTFS, you risk bumping into issues of performance, permissions, and the inability to mount them with write access if there is an issue with the hibernation file or the NTFS filesystem is “dirty”.

You can use ntfs-3g instead of ntfs3. There seems to be a disagreement which one (fuse vs kernel) is better for performance and reliability.

manjaro told me when i wanted to install something on my “windows drives” (they are ntfs formated) that this wont work and i should not do that.

Simply forget It. Buy a cheap 240gb SSD, install Manjaro on it with a native filesystem and access the other disks without trouble.

manjaro is installed on an nvme 2.0 (its dual booted)

can you recommend / give a name of that native filesystem? and can i read write delete them?

manjaro is installed on an nvme 2.0 (its dual booted)

So if Manjaro and all his folders are on an nvme… what are you trying to install in the ntfs drives?

can you recommend / give a name of that native filesystem? and can i read write delete them?

I understood you were trying to install Manjaro in a NTFS formatted drive, for the OS I believe it’s better ext4, xfs or btrfs.

No, I want to use my disks as normal disks . Manjaro is installed but I don’t want to install games on my OS drive. For example I want to install planet zoo but I want to install it on D not C (which is the Nvme drive ) and access the game . But I was told by Manjaro that that is a bad idea cause different format.

I was in the same situation once…
My recommendation is: Clean up under windows, as far as possible, and defragment the drives. Then shrink the Windows partition with windows tools and create a new ext4-formatted partition with Manjaro.
In general, it is recommended to disable fast startup and hibernation for dual-boot in Windows.

What do you mean ‘transfer over to manjaro’?

I have a Windows disk, and it is NTFS formatted.

When I boot Manjaro, I can read and write - and it opens in Dolphin as would any other storage device. The format (Windows SSD is 250GiB NTFS, BTRFS for my older Western Digital and EXT4 for my two bigger drives). 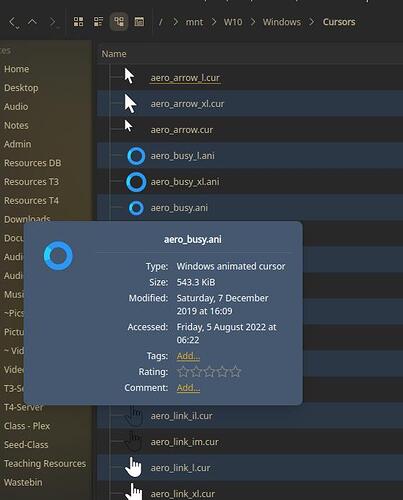 I can write files to it, then reboot to Windows and access them as normal.

Well I can’t use my other drives for installing anything via wine . Like nothing

NTFS, FAT32, and exFAT don’t support POSIX permissions or special devices, as do Ext4, XFS, and Btrfs. (Nor do symlinks in NTFS have the same support as on native Linux filesystems, such as containing special characters.)

You can use your NTFS storage to save files and read them, but when it comes to installing applications, even via wine, you’ll bump into problems.

I can’t even install on the formatted ssd which is now a ext4 ssd.

That sounds like a permissions issue. Does your user have read/write/execute permissions on the newly formatted drive? Take a look here:

I just noticed I don’t have privileges to my external ssd it says only root can make changes, I wanted to make a folder and the create new option is grayed out… how do I change it so that I can use it without being root? I’m surprised I can’t make changes since I used timeshift on it a few days ago (maybe timeshift uses root idk I’m not smart)