I have a lot of files with a naming scheme like

And I need to be able to rename them to

So for example I have a file named

And I need it renamed to

But it’s not just one file, I have hundreds of files with the same kind of name pattern that I also need to rename in the exact same way.

How can I achieve this?

I mean ideally I’d want to just be able to do something like rename -v 's/[*-*]//' *.txt as a start, then figure out something for that last string in a separate command. But clearly that command won’t work or I wouldn’t be here asking for help

I mean ideally I’d want to just be able to do something like rename -v 's/[*-*]//' *.txt as a start, then figure out something for that last string in a separate command. But clearly that command won’t work or I wouldn’t be here asking for help

If there are spaces and/or other special characters in the filenames, then you need to quote your variables. Try something like this…

Also, just to be clear, using rename is not a requirement, I can use another program if there’s one that can do it more easily.

If you’re using The Superior Desktop™, KRename supports regular expressions and previews before committing to the bulk rename. You can add individual files or entire folders (even recursively) in your batch job.

It also comes with some nifty plugins too. But in your case, the “Find and Replace” option (under the Filename tab) should suffice.

Make sure not to hit Finish until everything in the preview pane looks correct.

I would probably tackle something like that with a script, involving either sed or tr.

Ah, the regular expressions supported in krename conflict with my patterns

[ ] is read as regex character set by krename.

Not sure how to fix that…

[ ] is read as regex character set by krename.

Not sure how to fix that…

Escape the brackets with a backslash.

Tried this, but it didn’t seem to work.

I tried a bunch of things but it’s just not behaving like I expect.

Which should remove only the last [String] but it instead achieves the exact same result as the above. I am very confused rn.

The asterisks don’t work the same in regex.

You can use regex101.com with the string

EDIT: I just read your initial post; forgot what you were trying to “remove”. Oh boy, any regex wizards in here that know the expression to change,

Ugh I give up, I’ve been messing with that regex101.com for a while now and I just can’t find anything that works D:

The closet thing I could muster ends up deleting every “brackets group”, leaving you with:

In KRename, you would “replace” these with “nothing”, which essentially removes them.

EDIT: Nope, still nada. But I think I’m getting closer… 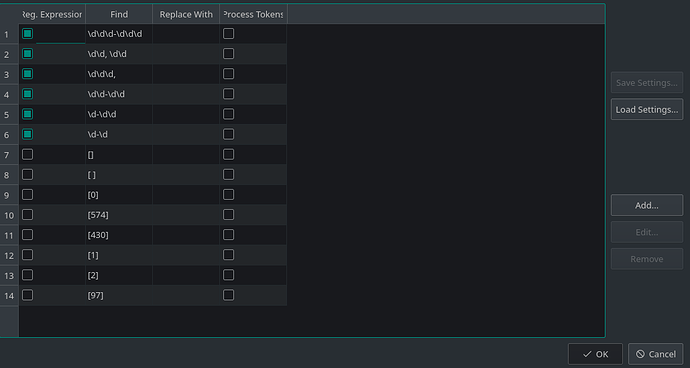 I tried that last one you suggested but it wouldn’t work. (neither part)

Either way now I only need to lose the last one, the one you assumed is probably a cinsistent 6-character HEX string (you are probably right about this)

Thank you for your help man

I think I have just found a way ─ in fact, one that could have done the whole job ─ to get rid of it.

So, if I understand you correctly, then you now have files in the format… ↓

That is correct, yes

I made a mistake in the OP with the spacing and with the total number of characters in that last bracket.

Okay, then let’s try this ─ untested, though…

Beat me to it

I also wasnt sure if its all in the same directory or if we need to recursively find them…
So heres a quick version for that, though it only checks for the first 2 columns.
(could be expanded, could be fed to a rename action, or could just be tested to see if it finds everything)

I made a mistake in the OP with the spacing and with the total number of characters in that last bracket.

Looks like a CRC32 checksum. I would leave them in the file’s name, since it’s a free pre-hashed value.

Your script returns this:

Thank you for your effort though, but you really don’t need to worry about it

I’m already satisfied with just having removed the [Int-Int] part, that was my main goal. Removing the (what I now presume to be) CRC32 Checksum part was just an afterthought really, it’s not necessary, it would just be for aesthetics anyways.