I’ve had a lot of trouble with getting audio to my headphones with Manjaro over the past year.
I’ve also learned a lot about pulseaudio and the way the software works.

Usually I can fix the problems by doing the following:

However today, after a big update and changing to kernel 5.8, I cannot get the headphones to work.

Nothing seems to give me audio on my headphones, the speakers work fine.

What DE are you using? Sometimes pulseaudio jack detection doesn’t work properly and needs to be set manually. If the DE doesn’t provide a good interface for that, pavucontrol is usually the best option to toggle settings.

Oh sorry, I forgot to mention that. I use KDE.

I’ve read about pavucontrol, but TBH, I like the way the audio control is implemented in KDE.

And this seems to be a recent issue, as the headphones are detected correctly, I can also see this in alsamixer.
The applications and devices also register and switch to the headphones correctly.

I just don’t hear any sound coming out of the headphones.
I’ve tested the headphones on a different device of course, which work fine.

I’ve installed pavucontrol just to check if it helps.

I can see the real time audio being sent to the headphones, as the bar is showing the sound variation of my music: 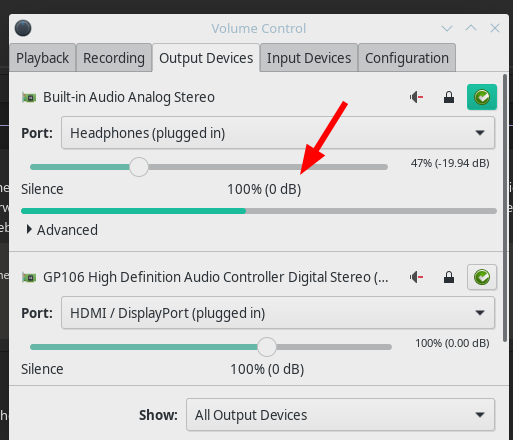 But still, nothing can be heard…

I have the same problem after update as OP - headphones produce no audio despite being detected and unmuted, laptop speakers work fine.

I have done similar ways as OP: inspected alsamixer and it was not muted, checked if the audio device profile was set to Analog Stereo Duplex (which it was), swtiched branch to testing, tried to install kernel 5.8 (didn’t solve the issue), tried even reinstalling - that seemed to fix the problem (installation came with kernel 5.6), but after pacman -Syu update headphones sound is gone, as previously described.

This might be either ALSA or something related with kernel, but I’m not sure.

Well, that’s strange! I just checked and it works perfectly on my laptop. Have you tried unplugging and replugging while the stream is playing? Sometimes, when I suspend the system without the phones, and then plug the phones before resuming, I need to do that. I don’t think this will solve your problem, but it’s just a remote hypothesis.

Another cause may be the kernel combined with your hardware. It wouldn’t hurt to try another kernel (older).

Lastly, you could try to downgrade pulseaudio from your cache:

ls -la /var/cache/pacman/pkg | grep pulseaudio will show which pulseaudio components you have installed and which versions.

I tried the different kernels and that did not work.

Sadly, after a reboot, still no difference…

I think so. It could be a different component (a dependency or a module), but I don’t know pulseaudio that well.

When you boot, this isn’t the profile selected?

alsa-info used to show the file /etc/asound.conf added by Manjaro to make Pulseaudio default
but it does not detect the new configuration file since it was moved to new location

if audio is still not working, please post response to

Not trying to hijack the thread, just bumping it. I am having similar issues after the update. I have an Asus Laptop with the same model as @Outer_Mind. @pidz-b is using an almost similar model.

Pulseaudio v14 has been expected for some months, but still not ready
PulseAudio 14.0 release blockers

there is a release-candidate package pulseaudio-git v13.99 in AUR, but i would not expect it to work any better than current version

The results of your request:

Mute can be turned off in GUI controls, or with this command:

Hehe, I forgot to put the headphone in the jack.

If you don’t mind, I’m also going to post results of three commands, as requested to OP by nikgnomic

I’ve installed updates today, but still no difference after a reboot

Can confirm this is the solution!

For the TDLR for people who don’t want to look through that post he linked for the answer, here it is.

Way one (simple but crooked): paste this line “options snd-hda-intel model=headset-mode” into file “/etc/modprobe.d/alsa.conf” then SHUTDOWN the system, DO NOT reboot. Then turn on the system and the sound should appear, but the microphone in the headphones will probably no longer work.