Problem in short
I have both Manjaro and Fedora installed on a laptop, but Grub only shows alternatives related to Manjaro during boot.

Manjaro is on sda1, Fedora on sda6.

This is my /etc/default/grub:

From the listing it seems you are using a BIOS/GPT setup.

You need to ensure your bios boot partition is large enough to hold what’s necessary.

What’s necessary I have no idea - but I do know that using the specific setup type BIOS/GPT Calamares requires the bios-boot-partition to be 32M and yours is 1MB - which may - or may not - indicate your bios-boot is too small to hold a dualboot scenario.

Yet you have two small partitions 8MB and 1GB which seems to be off within the current context.

From the immediate impression your partitioning and the assignment of partitions seems of - at least to some degree.

You are right that not every part of that partition table makes sense. Fedora insists on at least an extra boot partition, I believe that is the 1G one. I also created that BIOS partition during Fedora installation just in case I had some issues with booting in UEFI mode, as this laptop can be a little picky in UEFI mode. Fedora booted nicely from Grub provided by itself (which caused Manjaro the kernel panic)

I have no idea as the answer to the question in the second part of the quote.

Generally speaking - if your system supports (U)EFI - you should disable CSM/Legacy boot options in the firmware. Doing so prevents a lot of misunderstandings and possible misconfigurations related to dual booting.

What you should do now? I have really no idea - but if I were you - I would zap the first 10M of the disk - then start over.

In addition to the above:
When you start over, which in current setup as you explained is best to do, start by creating an ESP of at least 1GiB formatted as vfat. (Partition type EF00)
And don’t use any other boot partition.

Sorry to say, but your system is messed up just from the start and it’s not worth trying to fix it. Having a bios_grub partition is not recommended if not really needed. This only makes sense if you must boot using BIOS mode, but I doubt it in your case. Backup valuable data and reinstall using

Start with Fedora (with 512 MiB EFI partition), then install Manjaro using the same EFI partition, which means you just assign it during install. Afterwards, adjust /etc/default/grub to show the boot menu and run

and you should be fine after a fresh reboot. It’s really simple if just done the proper way.

That’s exactly what I have!

Generally speaking - if your system supports (U)EFI - you should disable CSM/Legacy boot options in the firmware. Doing so prevents a lot of misunderstandings and possible misconfigurations related to dual booting.

The security policies in the Lenovo firmware seem to primarily target thumb drives booting from EFI. I should be able to install both distros with UEFI, but disabling legacy mode before installing is a no-go since I need to boot from the thumb drive. You seem to be correct in that having legacy mode enabled confuses the Fedora installer though.

I’ll try to reinstall Fedora first, since that’s the one that seems to want to boot in the wrong mode. If that doesn’t fix things, I’ll reinstall both.

I should be able to install both distros with UEFI, but disabling legacy mode before installing is a no-go

I was wrong. Fedora refuses to install without a BIOS Boot partition present if the installer is booted in legacy mode (which is why it was added in the first place).

I was somehow able to boot the Fedora install USB in UEFI mode so I could reinstall it. Now both distros show up in Grub, but Manjaro gets stuck on boot. According to the firmware boot options, Manjaro is in BIOS mode. I’ll try to reinstall Manjaro, making sure everything is set to UEFI/GPT. If that fails, wiping the disk clean and starting from scratch is the next step. At least I’ll have a somewhat better understanding of these things this time around.

I was wrong. Fedora refuses to install without a BIOS Boot partition present if the installer is booted in legacy mode

so that also a Fedora entry is generated in the boot menu of Manjaro.

The solution to this was to simply disable Secureboot in the firmware settings. I still have to keep legacy mode enabled, or the computer will not “see” the thumb drive, but at least I can choose to boot thumb drives (and installed OSes) in UEFI mode.

I did that repeatedly after reinstalling both distros individually, to no avail.

After wiping the disk clean and doing everything from scratch, it finally works. This time, I installed Fedora first, then Manjaro. After installing, I can boot either in UEFI mode, or in legacy mode with UEFI first in the boot order.

Thank you to everyone who contributed in this thread for your help! This has been frustrating, but educational.

In case it may be useful for someone, this is the disk layout I ended up with. I have left plenty of unallocated space for further multibooting in the future (guess I like to torture myself?) 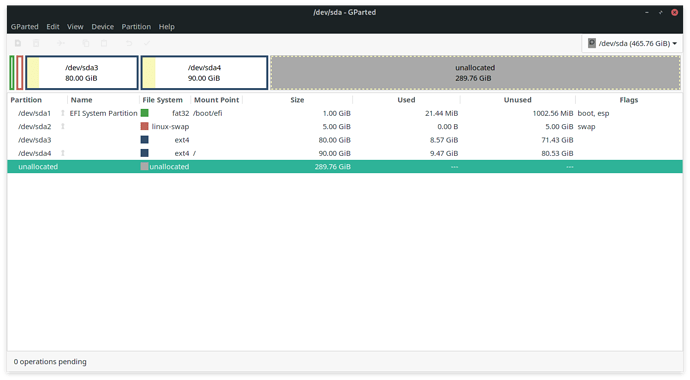 After building a new GPT with Gparted, I launched the Fedora installer, chose advanced manual partitioning and created:

After installing Fedora, I ran the Manjaro installer with manual partitioning.

One little change will make your life easier if you plan to use different UEFI bootloaders:
Try to mount your ESP at /efi and do a bind-mount of a subdirectory of the ESP as /boot.
This will allow you to put your kernel and ramdisks inside the ESP which is needed by bootloaders like sd-boot and rEFInd…