Firefox resets language with each update

Despite the process i described to fix the languages in Firefox after an update, the problem is the issue comes back with the next update. There was also a solution to add the missing language directly in the settings, but that had created a language mix on my end before.

So, before i finally start over a brand new profile, does anybody has another idea to fix this?

My Firefox has no issue with language (French too) whatsoever. Did you try to ‘repair’ the profile from Firefox menus? It will restore everything to defaults, remove addons, themes, but keep history/bookmarks/passwords.

//EDIT: speaking of the devil, I got updates 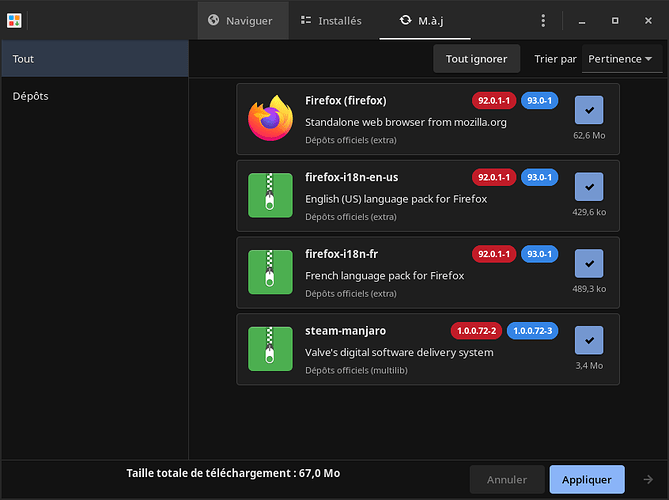 //EDIT2: yep it updated properly as expected, no language issue.

//EDIT3: to repair the profile, go to Help from the hamburger menu on top right side, then troubleshoot mode (Mode de dépannage) then accept restarting Firefox, and on the popup click Refresh profile. Make a backup of your profile folder before if you want, but it should already create one during the process on your desktop.

After that you’ll need to reconfigure Firefox, install your extensions and theme, but you should have a working profile. Maybe do changes by steps at this point to try to pinpoint maybe some modification you do that breaks something in Firefox.

After that you’ll need to reconfigure Firefox, install your extensions and theme

I’ll only need to export/copy my settings if i do.
But i’m checking first if other ways available.

I think it’s a lesser pain, the time it would take (I guess five to ten minutes) to reinstall and reconfigure extension and the few settings in Firefox itself (take screenshot of extension list, their specific settings, things like that before), because in your case you don’t really know what is broken in your profile. It could also make sure the problem lies in the profile itself so it is a potential fix but also a good way to troubleshoot the issue. If issue continues after repairing the profile, probably the issue is elsewhere.

Let see if someone has a better suggestion but that seems a very specific issue on your side so far.

As i was making backups of add-on settings and listing what i would need to re-add after refreshing my profile, i spotted the French language pack was present but disabled. I went to its page at Mozilla’s, found an Enable button in the Versions page, and clicked on it. And that was it.

I’ll keep my eye on this for the next update, see if it gets disabled again…

To be extra sure i use the system package: