I’m unable to format external SSD in Manjaro KDE without root privileges. I`d like to fix this.

I am trying to make my external nvme ssd to be something like a typical thumb drive i.e. so that any other device would recognize it and be able to read-write files on it.

So far I’ve used gparted, kde partition manager and disks. Every one of them was able to create ext4 system on my ssd, but when I try to paste something to it - I don’t have that option, permissions tab states the device as “only the owner can access it” or something similar.

Mounting it from terminal with root privileges destroys the whole purpose of this device being plug-and-play (on any system that can supports ext4, of course).

Whatever info you need in order to help me - tell me how to provide it and I will do it.

Thank you for the tutorial. From what I understood there is no way to make external ssd to be automatically available as plug-and-play device since I cannot swirl around in a terminal on any system that I want to recognize my drive.

I was asking for a way to make a plug-and-play external ssd, just like I have external HDD and thumbdrives that are indeed are plug-and-play devices which are available to any user connecting them to usb port of their machine without any additional steps. Somehow only external ssd gives me this excrutiating headache when trying to make it work as simple ‘‘plug it in - be immediately readable/writable’’ scenario.

Somehow only external ssd gives me this excrutiating headache when trying to make it work as simple ‘‘plug it in - be immediately readable/writable’’ scenario.

There might be a way if you create a udev rule for it, but that’s pretty complicated stuff, and especially if you’re a newbie.

Udev seems very complicated to me at this point.
I`m wondering why is the difference in plug-and-play approach between thumbdrive and ssd is so stark. It can’t just be in the filesystem itself, can it? SSD is ext4 and thumbdrive is exfat, yet thumbdrive is rw available to anyone while ssd is just for owner. 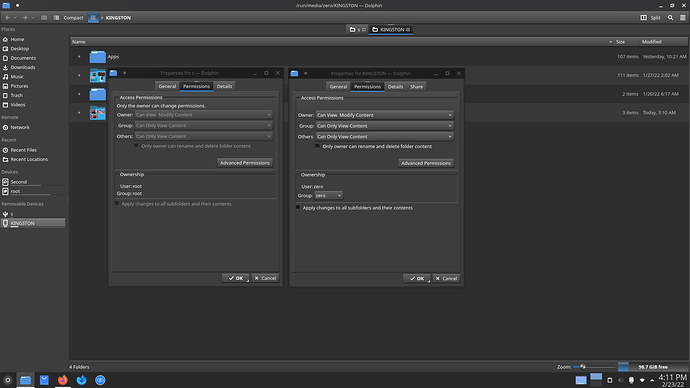 Set perms for everyone write/read/execute on the whole disk, that should do it

I did this sudo chown -R zero:users /run/media/zero/s and it seems to work at least for my current system ( I was able to read/write/delete files without any problems) I don’t know if it would work for other users on other systems but hopefully it will.

Should I use your command as well?

I`m wondering why is the difference in plug-and-play approach between thumbdrive and ssd is so stark. It can’t just be in the filesystem itself, can it? SSD is ext4 and thumbdrive is exfat, yet thumbdrive is rw available to anyone while ssd is just for owner.

ext4 on the other hand is a UNIX/POSIX filesystem, with full support for file ownership and permissions, and thus the permissions are the ones that were stored for each individual file/folder on the filesystem itself.

Set perms for everyone write/read/execute on the whole disk, that should do it

Yes, but the problem there is that the mountpoint resides under /run, which is itself a tmpfs and which as such lives only in virtual memory while the machine is up and running. Ergo, changing the permissions on the mountpoint will only remain effective until the next reboot — unless one creates a udev rule that automatically sets up the permissions for that particular device to world-writable at mount time.

I rebooted my system and the external ssd works fine, readable-writable as it should be. I don`t know if my problem is fixed, I’ll have to test this media on other systems later, but so far it was the most progress I’ve made in 5 hours. And now I know what to focus on, namely udev stuff to fix my problems myself without bothering others.

This screenshot shows the permissions state of the drive now 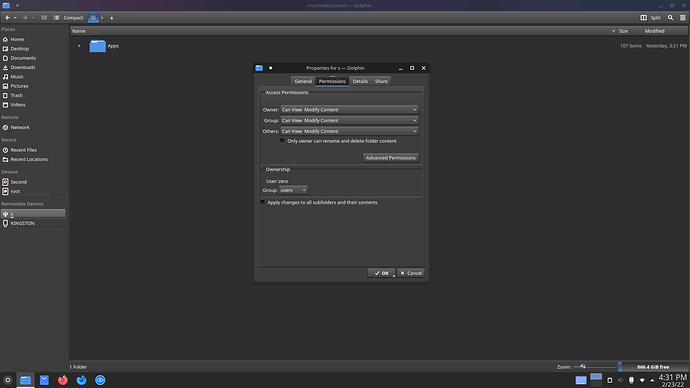 Thank you kind people for your help.

It should work on other linux systems, for UID 1000, other users on any system will not have permission unless you give them permission.

That’s okay for now. I’ve tested reading-writing-deleting fuctions of this external ssd on 3 other linux systems and everything works fine. I’ll do a more solid job when I can comprehend udev rules.