I have PinePhone with Manjaro Phosh on it. It has the most of the functions operative, but a big issue i think which is not resolved since a few months ago:

I think that everyone who uses Phosh knows this, but I cant found a theme about that. Any solution?

The same or something very similar happens on Plasma Mobile too.

There is definitely something wrong with how audio profile switching works.

I’ve tried that with no success:

I doubt it. I am using PulseAudio (not Pipewire) on Plasma Mobile and, as I have already written, it is similarly broken.

EDIT: Uh, actually both PulseAudio and Pipewire are running, huh? So which one is the system actually using?

This might help and clarify some things for you …

PulseAudio issues, programs conflicting and only one will play audio Sound

Please advise which applications are taking exclusive control of audio devices System data shows both PulseAudio and PipeWire sound servers are running Pipewire developers have recently advised that both sound servers running simultaneously will cause conflicts FAQ · Wiki · PipeWire / pipewire · GitLab running pulseaudio together with a PipeWire setup configured for audio is not supported (and will fail as both servers fight for devices). I suggest you disable PipeWire server systemctl -…

As pipewire.socket was only closed and is still enabled, it will restart on next boot and start pipewire.service I suggest you disable the socket and session manager service systemctl --user disable pipewire.socket pipewire-media-session.service ran the removal again and added the gst-plugin-pipewire recieved the dependency error again but this time it was kwin Xfce with kwin is not something I have seen on Manjaro before. I think it is more a thing on some other Arch-based distributions.…

Only one in 20 boots have sound Sound

ALSA is not a software sound server like the other 3 servers shown. ALSA works within the kernel like a Hardware Abstraction Layer to tie the hardware devices and drivers together The other sound servers run outside the kernel and rely on ALSA for sending audio streams to analog jack sockets, HDMI outputs or USB devices (ALSA does not support Bluetooth audio) But PipeWire and PulseAudio should not be running simultaneously as they are known to conflict I suggest you either: Install manjar…

when I try the first proposal, this is what I get:

when I try the second proposal:

so I finally don’t find the solution on that

but thanks so much for your help

I’m starting to think that the installation of any app (I don’t know which, maybe audiotube?) could make any dysfunction on the normal behavior of the sound configuration, because it is happening to me the same thing in the phosh system of another distribution. And, as I’ve been watching, the first clean installation the sound works perfectly.

The third command had a typo: comma rather than full stop in “pipewire.socket”

It would be easier to copy/paste terminal response instead of posting screenshots. People trying to help you would not have to type in responses. Text data can be indexed for web searches to help future users

It would be easier to copy/paste terminal response instead of posting screenshots. People trying to help you would not have to type in responses. Text data can be indexed for web searches to help future users

I know that, but I’m not able to copy text from terminal on Manjaro Phosh. If you know how to do it, please tell me.

In the meantime, I can only attach this: 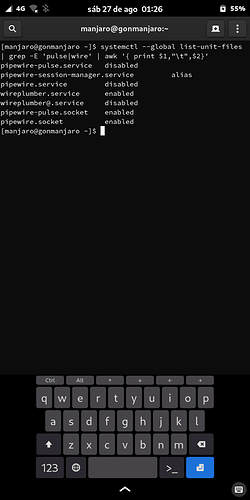 So I’ve been trying to do this:

correctly written and still no sollution.

Now the sound is even worse, because the speaker on top (where I listen conversation) isn’t working.

I’ve tried to uninstall all pipewire packages with no success because dependencies, and the same trying to uninstall pulseaudio.

So, is there a way for making work only pipewire or only pulseaudio like you advice??

If you revert to using PulseAudio I may be able to help with further troubleshooting
But my knowledge of PipeWire is for defence purposes only
(not my circus, not my flying monkeys)

If you were to revert to using PulseAudio I would now suggest masking pipewire.socket and pipewire.service to avoid hostilities

so how can I do this?

but pamac might stumble over PipeWire dependencies as beefore

If you cannot resolve dependency issues with the metapackage, install just the core PulseAudio package

When pamac asks to choose optional dependencies, select pulseaudio-alsa only
Those 2 packages should be enough to check onboard audio for microphone/speakers and wired headsets
pulseaudio-bluetooth and any other optional dependencies needed can be installed once the main audio inputs and outputs are working as expected

I tried the first you told, and the result was failure because dependencies.

Then I tried installing pulseaudio packages and these are the options I get:

When I select one of them (I don’t know which is the best), then the same thing: imposible installing it because dependencies.

I tried the first you told, and the result was failure because dependencies.

Please post full response from terminal to show dependencies causing problems. If the dependencies cannot be resolved, Manjaro Team will need relevant data to consider if any changes are needed for the metapackage

If metapackage manjaro-pulse works correctly, it should install:

I suggest you try selecting none of the 5 listed dependencies

The manjaro-pulse and manjaro-pipewire meta packages does not exist on the ARM side.