At first I tried the brother’s own websites instructions, and used the console, but I had to install DPKG, installed it, but the PC doesn’t see the printer, so I installed the printer again using cups.org/ still it doesn’t connect, even when I try connecting it with usb://dev/usblp0, I can see the printer in the USB port, but CUPS doesn’t see it.

so I tried installing via cups.org using the ‘Internet Printing protocol’ using the printers IP address, still nothing, I’ve used cups.org, brother method, and I’ve install the same drives use the console method and a archlinux.org clone.
I’m out of idea’s here
I’ve also tried inputting network connection links like ipp://printer_ip/ipp/port1 and lpd://printer_ip/BINARY_P1

Still jack, is there a console config for the network I’m missing? I already know the IP of my printer, and I didn’t have this trouble stalling on KDE, before I had to replace a hdd drive, is the new Kernel that’s messing with me?
I’m also at the point of reinstalling KDE again, or using Arch if I can’t use my printer.

For starters, what is the output of:

The driver for that printer should be this (in AUR):
https://aur.archlinux.org/packages/brother-mfc-j6510dw/?setlang=da&O=10&PP=10

Yeah that was the clone I used, and I used the IP method suggested in the comments too, still nothing

I just googled the printer name re Arch and found it in the AUR.
reading the (latest) comments on that page might provide useful info to you
… without that specific driver it probably wont work at all - as you discovered earlier

… it is (also) using the Debian (.deb) package you mentioned earlier
it is just … correctly installing it for you
you might have to remove/revert everything you did previously before this can work properly

Can someone explain if this has something to do with it? AUR (en) - brother-mfc-j6510dw

And how do I make the changes myself use PKGBUILD

Have you tried whether it works?
The comments read, to me, as if it should.
With some possible workaround in case it doesn’t.
I don’t see any (recent) comment re having to amend the PKGBUILD.

How to edit/amend a PKGBUILD is … covered elsewhere much more fully than could be done here.

… just look at it - the link to it is top right, below the heading, below “Package Actions”
it’s just a script describing where to get it, what to do, where to put stuff …

I installed my mfc-j8800-dw recently on a fresh install.

From there simply ‘add’ the printer. That’s it. Done & dusted.

That is the ideal/easy case.
That’ll only work if and when the correct/appropriate driver for the specific printer is installed/available
which it isn’t (by default) in this case

His/Her printer needs a driver only available from the AUR. 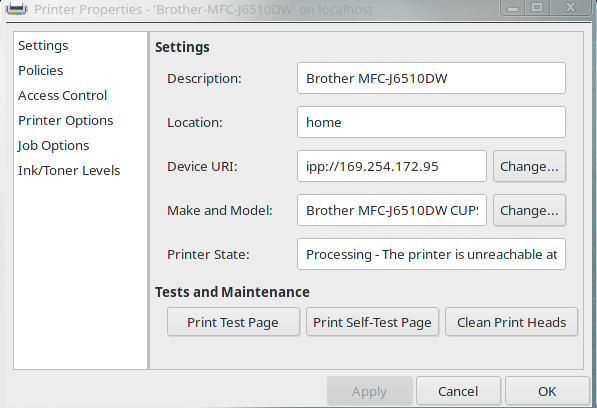 I tried that, it might be a error in coding in the PDD file, that the comment on the Arch website mentioned, Brother looks like they made that error when making that deb file

No, the above address, can you access the printer from your browser?

yay -S rpm-org or ysy -S dpkg Your choice, then: Step1. Download the tool.(linux-brprinter-installer-*.*.*-*.gz) The tool will be downloaded into the default "Download" directory. (The directory location varies depending on your Linux...

Have a look at that topic.

I downloaded dpkg from package manager to use brother’s method at the start of all this, its one of the first things I did.
is ‘ysy -S dpkg’ any better?

no, I can not access it via my browser

… but, my man, that is not the same printer
and you’d only do it that way if the AUR didn’t have to offer a choice … which is really rare