Today’s update seems to have broken the bcm2835 wifi driver. Installed wpa_supplicant to investigate; am currently SSH-ing in via Ethernet.

And connecting directly by Ethernet to the router gave the same result for pacman -Syu.

Ports 80 and 53 are open and dns is enabled in firewalld.

How can I clear this issue?

I do not use wifi but did you look at wpa_supplicant - ArchWiki ?
They don’t need “-D driver” which is optional.

And they also say

-D driver - Optionally specify the driver to be used. For a list of supported drivers see the output of wpa_supplicant -h.

Have you checked your interface name ?

The plot thickens unfortunately. The information below is a very shortened version of all commands and results to set a scene.

output of wps -h indicated a particular driver but specifying this in place of the bcm driver did not change the problem.

The interface name is correct.

I can connect to the over RealVNC server or use it with a display.

I cannot connect direct from the pi to my router via Ethernet with any different results from the not-properly-functioning-but-apparently-not-dead wifi. I need to keep the static wifi address in order reliably to use the realvnc connection.

I can’t system update because I have no wifi and can’t either connect to router or do a bridge to my laptop via ethernet (see below).

I have a backup via timeshift but cannot restore because it’s throwing segfaults.

Interestingly perhaps the timeshift json file did not have a UUID for parent device, but it did backup. Inserting the UUID for my SSD didn’t make any difference - still segfaulting.

This is utterly weird. I used to be able to connect headless to the RPi via VNC and use the pi’s wifi to update it.

As mentioned before I don’t have ifconfig (thought it would be standard package and didn’t install it). The laptop from which I vnc to the pi is x86 so I can’t just FISH the pkg over and install it.

I have tried to create a netctl bridge to my laptop following the wiki but can’t get that working either. Getting interface is already up messages and can’t resolve because I apparently need to use ifconfig to reset the config after stopping.

I seem to be fighting on a number of fronts.

What would be the best FIRST thing to try to resolve?

It was a networking problem - thanks for putting me on the right track. There were two issues: 1 firewalld needed to be configured to allow port 53 so that the DNS server response could be recieved by the pi. I had disabled firewalld a couple of times and assumed that this would solve the problem - it didn’t seem to, but equally the need to unblock port 53 was prbly masked by the next issue, and firewalld is now active with port 53 tcp and udp unblocked: 2 I had given the pi a manual net…

And in addition of course pacman doesn’t connect to the mirrors either.

That seemed to be solved when I added the static wifi address for the pi (which is used by realvnc when connecting via wifi) to the wifi configuration in Network Manager. But is it possible there is another underlying cause … ?

“could not resolve host” errors are usually caused by DNS issues.

Try seeing if you can ping 8.8.8.8 from the pi. If you can, your issue is related to DNS. If you can’t, the issue is in the connection itself.

And 443? mirror.cyberhost.uk is an HTTPS server.

443 wasn’t in the list, though https was enabled in firewall. I also added 443 explicitly, but no difference.

In firewalld is it necessary to add ports (eg 53) to open for all networks and hosts in addition to selecting the relevant services (eg dns) for the selected zone? I am assuming not, but this could be a mistake.

And Angry IP scan from the laptop shows:

On wifi the Rpi is not showing at all though its NM is showing as connected.

And another thing - I have just discovered the firewall tab in Settings. If I disable this via the tab the firewalld system tray icon disappears. However the configuration settings in the KDE Settings seem completely different to those in the configuration reached from the system tray. Default settings are to allow incoming and outgoing connections, but I don’t at all understand the connections tab.

I don’t at all understand the connections tab.

What’s got you stumped? Maybe you can post a picture.

IP scan from the laptop shows:

The question is why 443 is not there, when it’s set in firewalld. BTW I turned firewalld off and repeated the IP Scan. The results are the same. I also scanned the gateway, which has open ports 53,80,443 and filtered ports 22,808. Not sure if that last should be 8080.

The full list of services enabled in firewalld is

So it appears that enabling the service in firewalld is not setting the corresponding port automatically (these are all set in both permanent and runtime).

found on the scan, but so are 22 (SSH) and 80 (HTTP) which are not added explicitly but belong to configured services as per above.

There seems to be no consistency here. 22 is set both explicitly and under configured services, and appears on the scan. 553 and 443 are set similarly but do not. 80 is not set explicitly but still appears.

So I am wondering whether the KDE firewall is interfering, or perhaps in control instead of firewalld. I have tried turning if off, but that also turns off firewalld in systray. Similarly systemctl stop firewalld turns off the KDE firewall, so they seem to be the same service. However, the firewall configuration screen in KDE Settings is completely different from that which appears when the systray icon is right-clicked.

Here is the picture of the KDE firewall Connections tab you requested: 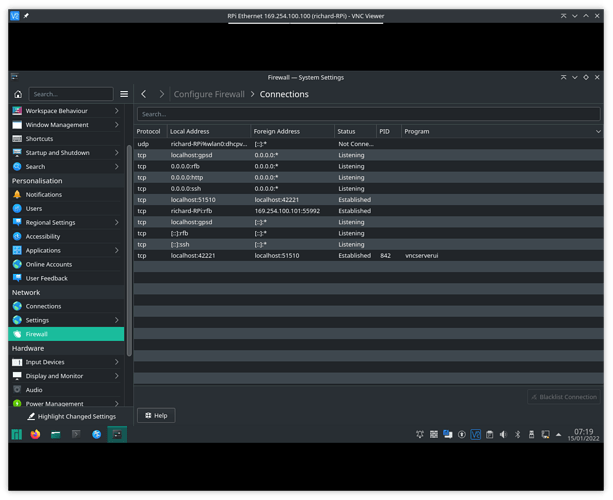 And here is the Settings page 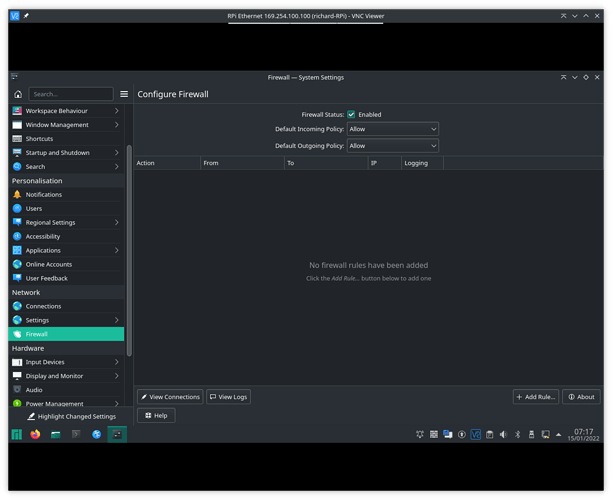 I have checked that I still have the Timeshift package, so could reinstall that from cache. However, I seem to have network issues so will defer doing that and try to fix this.

Do you have ip? It looks like it is replacing ifconfig. No ifconfig Package? / Applications & Desktop Environments / Arch Linux Forums

Have you tried starting from a cold boot (not reboot–complete shutdown, wait a few seconds, then boot)?

How is the Pi listed on the DHCP menu of your router interface?

Hi all. I do have ip, and ip addr shows my ethernet and wifi connections as configured in Network Manager. Both are lifted.

I can’t find a dhcp interface on my router management page, but the static ip address is listed as there, but off. So it is correct on the configuration has been present on the router.

Angry ip scan does not find it at all, for any ports. NM reports that it is connected, but with limited connectivity.

Do you have crda installed and your country code configured for it. Plasma has some weird firewall and I can not see the connected device with nmap here. I hardly use plasma though.

Well that was illuminating and ultimately successful.

The last post in the thread suggested comparing with a known successful installation, which I did.

As a result I removed some of the services selected in firewalld and all of the explicitly configured ports. The firewall is now set up as in my working instance.

I then had to change the firewall zone for wlan0 and eth0 to be the same -previously eth0 had been public and wlan0 home.

Then pinging it with Angry ip (A_ip) reset it to working! Strangely, as before pinging it it was not connecting to the router.

So 443 https was not set, despite https being set in the list of services.

I added 443 in firewalld via the system tray. No difference.

dns was not set, despite being selected in the list.

I added 53 explicitly, no difference.

I then tried adding 443 via the command line. It worked.

But it’s not listed.

So I wondered whether wpa_supplicant could be interfering with this, and sure enough it was running. So I stopped it. But no change, Then I disabled it, but that just started it again. So I masked it.

And then, even though i have a wifi profile configured in Network Manager, I didn’t have a wifi connection at all. Even one which won’t connect to the internet.

So I have unmasked wpa_supplicant for now. And am back to where I started, with a working unable-to-connect-to-the-internet connection, ports 443 and 53 set in firewalld and not visible on A_ip.

I did notice on the way through that wpa_supplicant seemed to be configured with country code IE. I am GB.

You may recall that I had installed wpa_supplicant because NM was not giving me a connection.

I hadn’t set country=IE so it wasn’t a total surprise that setting country=GB didn’t make any difference.

For any of you still following this, what next? I have no idea.

the static ip address is listed as there, but off

Is this IP address the same as the one your computer thinks it is assigned (output of ip address)?

Is your image on an SD card? I wonder if you can flash another SD card with something (doesn’t matter what, RaspberryPi OS or whatever) and see if it will connect. That would tell you if it is a hardware issue.