Thank you for your suggestion, i will test it and give you feedback.

There is no broadcom-wl driver yet compiiled for 6.0 kernel series.

you suggest that i should wait for some time before changing kernels?
looks like for now for now i will revert to Kernel 5.19.

you suggest that i should wait for some time before changing kernels?

Unless you need a feature specific too version 6, I always recommend sticking to an older LTS kernel. Version 5.15 or 5.10 specifically.

The community repository is enabled/allowed on my computer while i was troubleshooting on my own.

I tried the same exact commands, you posted, it displayed a lot of errors, but said transaction is successful. I rebooted, but wi-fi did not worked for me.

Until then, if something else happens or if there is new information, i will stay with 5.19 kernel.

Photo of the output: 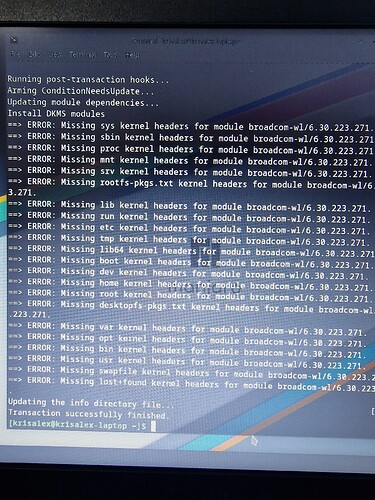 i am open for ideas, suggestions and updates, whenever they become available.

Thank you team, for your efforts.

That error only specifies you need the headers for your kernel(s). They can be installed with:

This will install the headers for all installed kernels.

But there are still no guarantees the wireless will work.

After this last issue is resolved, the topic can be archived for a better day in the future

i will try this before reverting. Thank you again.

I already have the kernel installed.
How to make the switch kernels itself? How to tell Manjaro boot using this kernel, specifying the desired kernel?

How to make the switch kernels itself? How to tell Manjaro boot using this kernel, specifying the desired kernel?

When your computer is starting, during the BIOS/UEFI screen when you are informed to PressKey to enter setup, or something in that line, press/SPAM the Esc and/or Ctrl keys, to make the grub boot loader appear. (It’s hidden by default.)

On the grub menu, use Up and Down arrow keys to navigate to the Advanced… option, and press Enter to enter it.

On that screen, use the Up and Down arrows to select the kernel version to boot into.

The preferable way to get working on kernel 6.0 would be

Package broadcom-wl-dkms hasn’t got the needed code changes in it yet, so fails to compile with linux60-headers.

The dkms package can be hacked to get compiled and working, and seems stable for me for the last 5 days, although I don’t use roaming so I can’t comment on that aspect.

Obviously its not a recommended way to go about it, but I think it demonstrates compatibility with kernel 6.0

If you want to use wl on kernel 6.0 and don’t want to wait for the working version to migrate to stable branch, manual migration is possible. The package is compatible and builds with 6.0 and older kernels. Steps: install headers for kernels you have installed For example pamac install linux60-headers linux519-headers Download the specific version of the package Choose a mirror from /etc/pacman.d/mirrorlist Download these two files unstable/community/x86_64/ broadcom-wl-dkms-6.30.…

Ok i will try this

I expect it to break for you as well

well so far all advice how to make it work on kernel failed.

Well, i reverted back to Linux kernel 5.19.16 on my laptop, now it works, and i am happy that it works. this is where i am going to stay for a long-long time on the laptop. Truth is i wanted 6.0 kernel for the performance improvements it brings, but it is what it is.

this is where i am going to stay for a long-long time on the laptop.

Once again, if you want to keep it, as you say, a long-long time, I suggest an LTS kernel. Because that is Long Term Support. and 5.19 isn’t, so it’ll go EOL sooner, disapear from the repositories sooner, and you’ll end up having to replace it much sooner, just to have a working system. But I’ll stop bugging you now.

"What should I be aware of if I'm not on an LTS kernel?"/en

Thanks for you note, note taken. I will keep the LTS in mind, and migrate to LTS kernel at a time of my convenience. Cheers.