I’ve installed Manjaro Mate on a new SSD. A second drive has Kubuntu.
Both distros are listed in UEFI.

I need a bit of reassurance that the partitions are correct, especially the second drive one here which has ! and a — boot flag.

Sorry, but the forum would not let me post media files or even hyperlinks.

Thanks for having me on board.
John

This is the inxi output:

What to do now?

What to do now?

It’s not what I would have done, but it’s perfectly allowed.

No, you don’t need that: That’s the advantage of UEFI: You can boot multiple OSes of the same ESP but some people don’t like that and want each OS to have their own ESP, and that’s what you have…

And that i is perfectly fine, but I have a triple boot system using 1 ESP:

Aw, thanks! I’m glad to have the reassurance.

I notice you use rEFind. May I ask why?

And rEFInd comes with an EFI shell and that allows me to add / remove EFI drivers and follow this manual. (I’m on page 48 since the last 3 months)

The manual put me right off. Grub works.

I notice you use rEFind. May I ask why?

For me, I personally like rEFInd because it’s so much more simple than grub to me. For grub, you have to use update-grub, and make sure it plays well with all of your OS’s

I don’t have grub installed on my computer, only rEFInd. What it does is at boot, it searches for all bootable OS’s (for me is Windows 10, Manjaro, Arch Linux, OpenSUSE) and show it all on the screen. 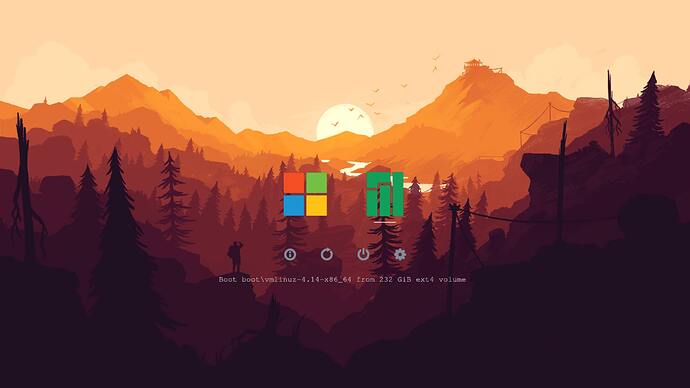 I created a theme for rEFInd if anyone is interested. rEFInd-sunset repo. Sunset rEFInd Theme rEFInd is a boot manager for UEFI systems and scans for kernels & EFI at boot. Usage Locate your refind EFI directory. This is commonly...

I run Manjaro and Kubuntu only, so rEFind, though neat, would be overkill just now.

I ran into so much trouble with Windows 10 that I removed the darned thing. Thankfully, I had it on a separate HDD. Otherwise, it seems you cannot uninstall it, not completely.

Thanks for the heads up though!