AUR or SNAP app version to minimize risk of breakage?

Im curious if I shall rather install the AUR version or the Snap version of a given app? If system integrity and safety are first I mean if I wanna avoid risk of breaking the OS.

I always go with AUR rather than Snap or Flatpak. I’ve only had a few AUR packages mess up in 7 years of using it. Flatpak packages are rather bulky and the one Snap application I installed scattered crud all over my hard drive. I had to remove loadsa stuff manually. Never again!

I think using the AUR is OK but as long as you do not replace critical system components. I just use it mainly for adding things like , for instance, a word processor or an image viewer. Those things are not affecting the main system.

Snap includes everything to run the program and is run by Canonical the company that makes Ubuntu.
Some people who are space concious don’t like them.

AUR are scripts written by people to build a program. Make sure you trust the source. Read if anyone had problems before you use it.

I have not had a problem using either of them. That said I can only think of one program I am using snap for right now and it is released on snap by the developer.

I have also used the AUR for a few programs also.

You could also download source code, gather up the dependencies and make the package yourself, but then you’d have to do that every time to update the program too. That is what the AUR is meant to avoid as it is building the program but can update it too.

The ultimate decision on what you want to use is up to you, based on your needs not others.

In the end, it is good to have choices, competition is good.

@wordler and @Lord_Phan Thank you for both of you for the detailed helpful answer!

Manjaro community is truly amazing, full of good, non toxic people (unlike many others without naming). 7 years on Manjaro and you still have patience for noobs.

Based on your guides I will go for AUR when the wanted app i snot in the Official Manjaro repo and will stick only to simple apps not system stuff. I also have great troubles with those big money and power oriented distros and their packages, and this is the main reason why I am here and left Debian/buntus and Fedora etc. While a uniform app package would serve the interests of Linux (if not linked to any big commercial…).

Regarding trust in the source thats a good question: For example when you use Signal for secure chat than you can use AUR version or Flatpak… I guess if you use AUR than you trust the Manjaro packager dev and if you use Flatpak than I guess you trust the Signal dev team…

Snap application I installed scattered crud all over my hard drive. I had to remove loadsa stuff manually. Never again!

I already installed one Snap app just half an hour ago (Standard Notes 3.4.6 from PAMAC App Store). I wanna remove it now and install the AUR version of this app. How can I clean up, like you did? Or shall I rather Timeshift and recover to last save just an hour ago?

If you use AUR then you are trusting an Arch User, not a Manjaro packager. There are a few things that Manjaro has used from the AUR and made them into Manjaro packages available in the Official Repositories, but most of the AUR is made of things that the maintainers are hoping will get into the Arch Repositories. Oh, the crazy world of Linux eh?

Timeshift would probably be a lot easier!

This is seriously complex (if not a mess…)

That is a whole lot difference there, trusting an unknown (to me) Arch user with my SIGNAL desktop app vs trusting the Manjaro team or trusting Signal devs or for example Microsoft with an installer or so. So the AUR is like an apk blackmarket for Android without safety switch

Well, I am not sure yet if I shall trust anyone with this apart from the SIGNAL dev team.

Be right back in 100ms, jumping time by Timeshift back to 23:00 to get rid of Snap app for good

Like I said, 7 years, no real problems. The only issues were apps that stopped working or were outdated. I just deleted them and used other things. Fear is the mind-killer. Try some things and see how they are. If you’re regularly backing up then there is no danger.

It really depends on the app and which version works best for you. Take clementine music player for example. I tried official, aur, flatpak and snap. Snap is the only version that had working gdrive integration so I used the snap version. Dropbox from the aur had an issue with key integration and syncing so I used the flatpak.

TLDR use the version that works best 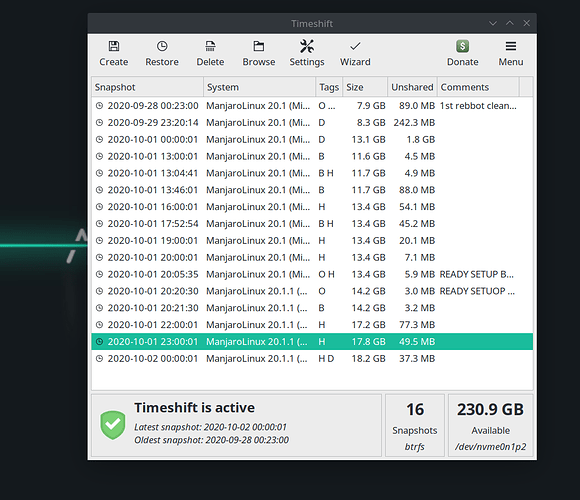 Dropbox from the AUR just needs the public key importing from Dropbox. The instructions are in the comments in the AUR. Clementine hasn’t received any love from the devs for a while, but there is a fork called Strawberry which is great. Not sure if it syncs with Gdrive though, will have to check later.

As you say, whatever works best

Timeshift would probably be a lot easier!

This Timeshift is extraterrestrial alien tech! I swear its black magic. Proof that its alien tech: its free while its better than any commercial stuff will ever be.

And I struggled on Win10 for decades… OMG… fully went back hours in 100ms, seriously 100ms if not 50ms. Today I already donated to its dev but I will do way more.

This SNAP app is gone for good! Like never happened.

Tbh when I installed Dropbox it was one of the first apps I’d installed and was a complete manjaro/arch newb. I’d only ever run mint and I just picked the easiest option at the time

Ah! That’s where your fear comes from: you were a Windows user! Your dark days are over, welcome to the Light!

Fair play @sawdoctor. There is quite a bit to take in when coming from Mint. I followed a similar path: Mint; SolydXK; Manjaro.

You are the safety switch. The AUR is nothing, repeat nothing but a repository of PKGBUILDs. With just a little bit of effort on your part, you can look at a PKGBUILD and determine what it is going to do, to accomplish the end result of making a pacman installable package.

That is a whole lot difference there, trusting an unknown (to me) Arch user with my SIGNAL desktop app vs trusting the Manjaro team or trusting Signal devs or for example Microsoft with an installer or so.

Well, I am not sure yet if I shall trust anyone with this apart from the SIGNAL dev team.

<sarcasm>Well, since you seem sure of your ability to audit source code, you are more than able to pick apart a PKGBUILD.</sarcasm>

You see? You’re putting trust in a dev team to not put Bad Stuff™ in their source code. The unknown AUR user/Arch and Manjaro maintainers/even microsoft pulls that same source code in to build usable software for you.

Learn the basics of PKGBUILD. It might help you from developing a peptic ulcer, from all the worrying.

Reading my lines its clear that I have zero programming knowledge or code auditing skills. And everything here on Linux and especially on Manjaro with the 4-5 different app source is unknown and new to me and for now what I trust are the sources from official dev teams like Manjaro team or Snaps from the big Ubuntu but not really the not Manjaro approved apps from individual programmers out of any control of the Manjaro devs and community (who cleary do have code auditing skills).
I do not think I will ever want to learn code auditing or programming (I do not feel like I would be good at it), so I rely on those who I trust. I tend to trust those who have something to loose if they are doing something wrong, members of groups, companies, communities who can lose their credibility (name, fame) and/or even money/career etc.

I guess I just do not know anything about AUR, PKGBUILD, Arch devs, ARC community etc therefore I have low level of trust toward AUR apps (for now).

During my decades on Windows what I got used to is a habit that I download the apps only and only directly from the devs and never via intermediators, so all these various repos and even unofficial packages are really something that I do not trust at the same level as when you download an ISO image from the website of a software giant. I guess its rather just me for now and I will feel the actual credibility of the various sources by time, based on experience. For now, in my eyes AUR is similar to Apkpure.com on Android where you switch off the Play Protect to let the apks install.

Official repositories > AUR (if packages have enough votes and popularity) > Flathub (My last choice, because i want to save free space).

I never use snap packages, because i just don’t need them and i don’t like so much things from Canonical.

What it’s true, if you want to use AUR, you should definitely read informations on Arch wiki and got overall small essential knowledge about the Arch.