As a linux arch AUR noob, how would you recommend I pick which version to install? eg webcamoid

I guess git is the version control by Senor Torvolds himself, is that safer? Or do the elite just go straight to the latest version? Try them out? (I’m kinda dumb and lazy to be reading the release history in github if I’m honest)

Git is the version control system (VCS) designed and developed by Linus Torvalds, the creator of the Linux kernel. Git is now used to maintain AUR packages, as well as many other projects, including sources for the Linux kernel.

If you intend to use yay as AUR helper, don’t forget yay’s --devel flag to trigger an update if a git package is changed.

The version of a git package wont change until the package is updated, even if new code has been added to the git. Odds are both versions came from the same git repository. Either version may have bugs. Newer versions are more likely to have less bugs as previous bugs are fixed. But its also possible that new bugs are added. A rule of thumb I use is to install the newest version of AUR packages unless the older version has a feature I want that has been removed.

thanks for the tip. I usually just use pacman with the gui. I have the yay-git installed from there though. 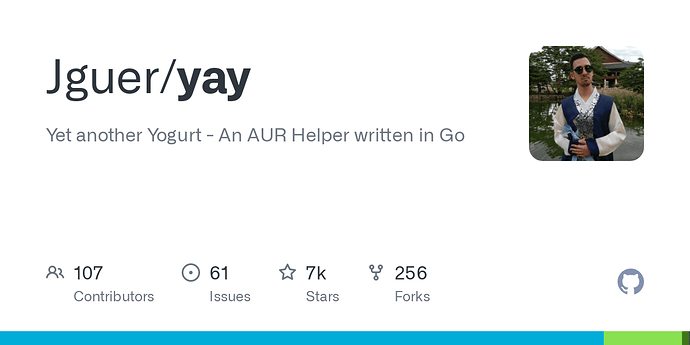 GitHub - Jguer/yay: Yet another Yogurt - An AUR Helper written in Go

Yet another Yogurt - An AUR Helper written in Go. Contribute to Jguer/yay development by creating an account on GitHub.

is this advantageous to use for Arch Linux package management tasks ? Is there any conflict in using it along side the pacman GUI version? apparently, “all packages available in pacman are also in yay… because yay is just a command that automates a specific function of pacman. it does not matter”

it seems like maybe it just automates it, but still uses all the same repositories for the most part? perhaps works better for smoother automation? (sorry dumb noob)

How to Install Yay AUR Helper in Arch Linux and Manjaro

I usually just use pacman with the gui.

Pacman doesn’t have a GUI. Did you mean Pamac (Add/Remove Software)?

I have the yay-git installed

Why? yay is available in our community repo. As already recommended, if you’re not sure which to install then use the stable release version.

is [Yay] advantageous to use for Arch Linux package management tasks ?

This is Manjaro, not Arch. They are not the same thing.

Yay is an AUR helper which are essentially just Pacman wrappers. AUR helpers indeed can automate installing and updating AUR packages. However, it’s best to learn how to do it manually first so you know what you’re actually automating.

How to Install Yay AUR Helper in Arch Linux and Manjaro

Neither use sudo with yay nor with pamac.

Pacman doesn’t have a GUI. Did you mean Pamac (Add/Remove Software)?

I got the yay-git AUR one, the AUR apps seem to integrate smoother or something in my experience. is the community one better? 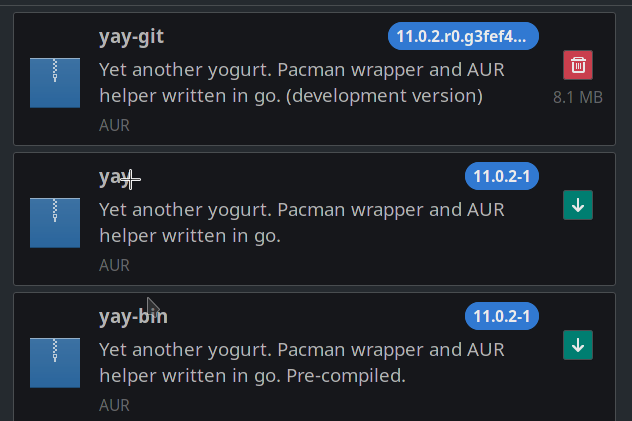 manjaro is arch based tho yeah? i know it’s not strictly the same thing.

that advice makes sense to avoid tech blogs, I’ll try to avoid forum post older than a few years too

I would like to give one piece of advice I forgot in my last post. As a new AUR user be careful of what you install with the AUR. Applications are mostly safe, but avoid installing parts of the OS if you can. The main reason for this is that updates in the AUR lag behind the repositories, and an upgrade of system components from the repositories may break AUR packages. If its an application, it likely just wont work. If its a system component, it may break the OS and might stop it from booting.

I got the yay-git AUR one, the AUR apps seem to integrate smoother or something in my experience. is the community one better?

maybe I’m a clueless heretic, but it seems like AUR stuff is faster and people or reddit i know i know where saying they thought it integrates better

also people always seem to say a perk of manjaro is you get access to the AUR repo
I guess you’re saying that community is made just for manjaro. is there a performance test to settle the dispute? is community more secure?
maybe it’s better but it doesn’t strike me as obviously better, but i have a lot to learn

Explain both because to me it doesn’t mean anything.

That can be caused by the fact you compile the stuff yourself, it’s able to find better optimizations for your cpu, depends on the compiler settings or there is newer version in AUR possibly which one is more optimized but it can be the opposite too,
it’s less secure than Manjaro’s repo, Manjaro’s repo is verified, anyone can post anything to AUR basically,
it doesn’t integrate better… well better than flatpak if you mean but no better than packages from Manjaro’s repo, it actually integrates worse because it relies on Arch repo and not Manjaro one, sometimes the AUR packages can’t compile because Manjaro has different versions of other packages that are needed for the AUR one to build,
that you have access to the AUR is like cherry on top only for when the software is not in Manjaro’s repo

EDIT:
For example software I develop and is packaged as shiny-mirrors is in AUR and Manjaro’s repo,
but the AUR package is only for Arch because it retrieves Arch mirrors,
but the shiny-mirrors in Manjaro repo’s retrieves Manjaro mirrors
If you used the AUR one you could potentially break your Manjaro system when updating and so on

EDIT 2:
A lot of AUR packages can break your Manjaro system if you don’t know what you are doing

If you compile it all yourself does that mean you have to download files from github in all instances and thus run hashchecks for safety? I’m not comfortable with the stuff yet but I do like the control so maybe one day.

They use package manager called Emerge, it downloads the source and so on,
they have their own wiki, look there

just warning, when they have update for anything you have to recompile it afaik, and recompiling kernel, firefox etc(including first time compiling)… yourself can take days depending on the computer

If you want to compile all stuff yourself

I need to compile my own stuff to get my DSLR video cam to work. Or at least I need the kernel’s headers installed so I can make a module. I don’t really get it, I just know the kernel number doesn’t match with the ‘out of the box’ v2loopback kernel module so I have to customize myself to make it work.

Do you know how I’m supposed to have the kernel header installed that doesn’t match in number to any of the kernels available?