Are there any plans for Manjaro, to create a custom Desktop Environment?

You know then we could be more efficient
(I would like a Gnome desktop with KDE layout, with proper desktop icon and nautilus integration)

then we could be more efficient

More efficient at what?

I for one am perfectly happy with my customized Plasma setup. It’s exactly as I want it. 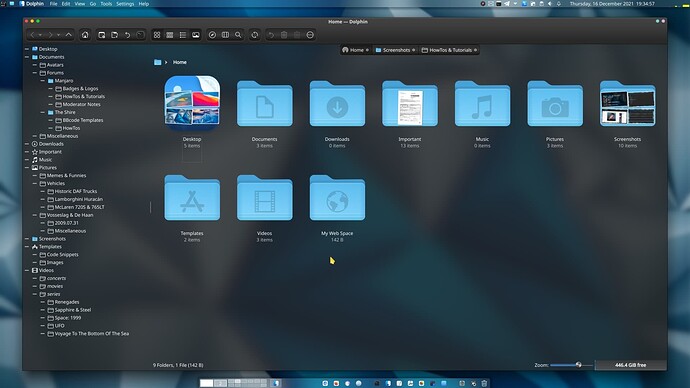 Don’t know, I will have to see when I have time to get back to it.

You know if we now don’t like something the normie goes to the os devs themselves. While the Gnome team is responsible for their stuff. It’s a mess right now. This is why Pop OS! Made their DE. We would also like to see more competition!

While the Gnome team is responsible for their stuff. It’s a mess right now.

The GNOME and GTK developers are quite known for having their own vision and not caring about the needs of or requests from their user base.

Plasma on the other hand allows you almost infinite customization possibilities. You can make it look and behave however you want.

(I would like a Gnome desktop with KDE layout, with proper desktop icon and nautilus integration)

there is gnome-layout-switcher for that

Yeah, but Gnome is good for me, I don’t want to really dug deep and customize everything, I just want a DE that is Gnome based and is like Windows’ layout. (With proper desktop icons, Budgie does not offer that.)

But it is not out of the box, and it could be buggy, since it relies on extensions, which can be broken at some point, they don’t integrate with the system really well.

If the Gnome team would’ve made layouts officially, it would be good

I just want a DE that is Gnome based and is like Windows’ layout.

Well, then there are GNOME Classic and Cinnamon (which is a GNOME fork).

It’s as good as it gets probably. You know I just wanna point out what could we improve in Manjaro.

who needs Desktop icons?
once one window is open - you can’t see them
to use them, you need to … do something
why not just start the application menu with a single key stroke - and select from the favourites or the menu
or just start typing the program name …
KDE menu does that, Xfce Whisker menu does that, Cinnamon menu does that, rofi does that …
… my opinion

It was designed to be as much like Microsoft Windows as possible. But quite frankly ─ and this is my personal opinion only, so cut me some slack

─ I feel that it’s silly to want to make GNU/Linux look like Windows, because…

But it wasn’t Windows who invented windows.

True. The original production windowing interface was created at XEROX in the 1970s, and used internally only. Steve Jobs then borrowed that concept for the Apple Lisa and later the Macintosh.

UNIX begot a windowing system ─ called W Window System, the predecessor of the X Window System (which most people mistakenly call “X-Windows”) ─ in the 1980s, and only after that did Bill Gates offer the first version of Microsoft Windows, as a tiling-only window manager on top of DOS.

You know then we could be more efficient
(I would like a Gnome desktop with KDE layout, with proper desktop icon and nautilus integration)

LORD NO there are enough desktops available.

As already said you have Cinnamon, (sort of) Gnome desktop with (sort of) KDE layout.

And recently, there is Cutefish, KDE desktop with Gnome layout. Roughly.

Absolutely no need to reinvent the wheel.

Why not use Xfce?