Applications not using my GPU

I need help with a little problem, so here it is:

My MSI Laptop is a hybrid/dual gpu system, running with a combination of a Nvidia RTX 2060 dedicated gpu, as well as a Mesa Intel UHD Graphics integrated gpu. Now, my PC is pretty good, so I was confused when I was only getting 80fps playing Minecraft. (Not to mention playing something more intensive). I looked into it, and found out that Minecraft was running only on my Intel UHD graphics, and not using my Dedicated GPU at all.

So, of course, I tried to fix it. I went through a couple manjaro wiki forums, and tried a couple of different things. Installing Nvidia-340x drivers didn’t work. Optimus Manager, although it sounds like something that would be interesting to set up, only ended up shutting off my monitor screen, as my monitor screen is plugged into my GPU, whereas my laptop screen is running off my Intel UHD. Re-installing Nvidia drivers didn’t work, but I’m not sure I did that right. Finally, following the directions here just shut off my laptop screen.

So I don’t know what to do from here, that’s why I’m asking you all. Does anyone know anything? If you need me to post any info from my system, Just ask me. I’ll be happy to help. 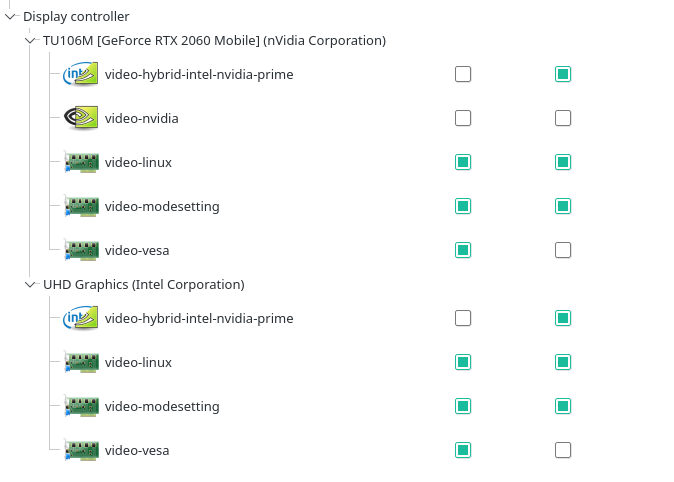 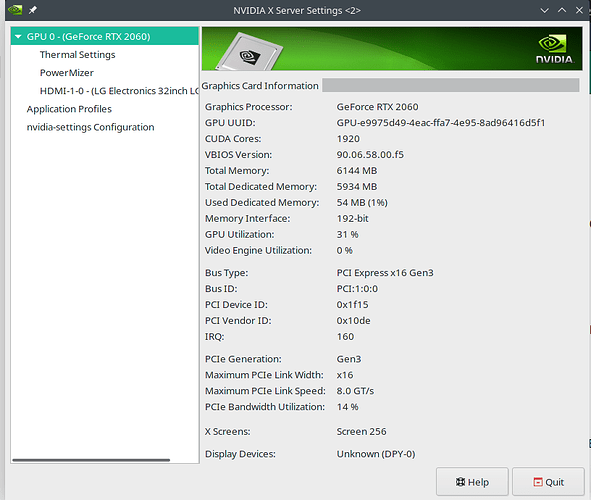 Any help is appreciated!

nvidia-smi came back with this: 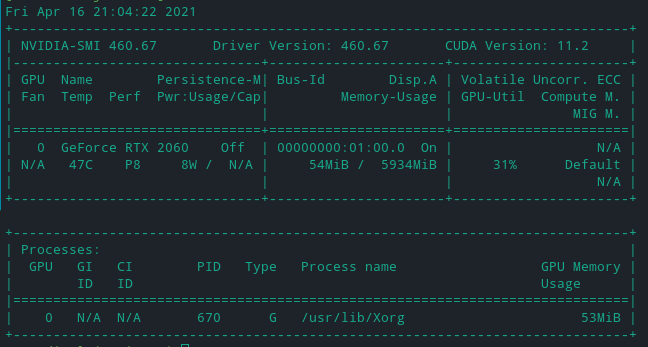 Install the Hybrid Prime driver (seems to be done), and run your applications with the prime-run command to use the dedicated GPU for the application, so in theory, fictional example:

I tried out the prime-run command, and while it did start Minecraft using my GPU, I was still getting really bad framerates. When I go to Hardware Configuration in manjaro settings manager and uninstall the hybrid drivers then install the video-nvidia driver, it causes my laptop screen (which is running off my Intel UHD Integrated GPU) to become black with a single line of text shown in the top left corner, but running Minecraft on my monitor that is plugged into my Nvidia GPU HDMI slot on ly laptop when I have the video-nvidia drivers installed can get me framerates in the 2000+, while running Minecraft using prime-run with hybrid drivers gets me framerates in the 60-140s. Is there any way to fix this?

I attempted unplugging my monitor and running minecraft using prime-run on just my laptop screen, and the fps went up to ~500 in the same conditions as the previous ~2000fps scenario. While this is better then when running with my monitor, I still think that this is not the full potential of what can be upgraded. Plus, I don’t want to have to only play using my laptop screen.

The Prime Run command seem to work as intended.

The prime-run command does work, minecraft recognized that it was running off my Dgpu rather than my Igpu, but the problem was the framerate difference between using intel-nvidia hybrid drivers versus video-nvidia drivers. Video-nvidia drivers would stop my laptop screen from working, but my framerate would increase by ~1600fps

I don’t know hybrid setup enough to know what’s going on. Wait for someone else to answer I guess. From my point of view it works.

//EDIT: maybe open a new thread linking to this one, explaining the new situation (as this thread is actually now solved), with a comprehensive title so you may have better luck.

I marked my own post as solution. You can remove the ‘solution’ mark if you think this thread is not solved.

Have you tried running Minecraft with prime-run in full-screen on the external monitor? Please also post the output of inxi -Gazy and xrandr --listproviders.

I have tried running minecraft on the external monitor in full screen, but F11 borderless full screen moves it over to my laptop screen, and I haven’t tried to get it to F11 full screen on my monitor.

Try to do that somehow. That should enable unredirection, which should probably improve the performance.

Also if it makes a difference, every time I am playing minecraft and I receive a notification (the type that shows up in the Manjaro Notifaction Center), my minecraft lags significantly.

While it is true that I achieved that 2000+ fps in an area of Minecraft that was relatively unpopulated, meaning my processor had less to load, it was an area where I could have a controlled amount of things around me, as to accurately measure the fps changes. If I were to go to somewhere with considerably more to load, the fps gap is more like this: prime-run gets ~90fps, no hybrid drivers gets ~850fps

So, it turns out that all I had to do was install Optimus-manager and disable my iGPU! This fixed the problem, and it forced my laptop monitor to use my GPU, meaning that I have better graphics on it too, and my computer fans are quieter.