Yakuake - Ended up with a blinding white background?

Figured KDE would be the best plac eot post this? Assuming it’s something theme related…

Anyways, I’m not sure exactly when this happened. But my drop down terminal is no longer a nice to view dark complexion. It’s bright white.

In the past week I recall Installling libxml2-git which had me uninstall and replace libxlm2… just messing around to try to get an application working from AUR. But it turns out to not be a factor, and I reinstalled the default libxml2 (not -git) from the Pacman official repository.

Played around setting all my plasma themes, also windows decoraitons including the Gnome Part which would effect the otherwise white remaining Pacman gui? I have a feeling this may be involved, and if so a quick reminder of how to ensure this is in dark mode that would be appreciated.

Another mention is I installed deepin backup. I think it’s better to use clonezilla for my case, but I was a bit confused by it asking me to make a live usb with a folder if files rather than an ISO like I’m used to and inpatiently checked out deepin. I notice in installing that there is a heap of Deepin files, including deepin files, deepin control settings (this has options like themes etc?) Should I uninstall anything Deepin than so long if I can do without it overall?

Below is likely, or surely irrelevant but I’m a noob and figured I’d mention it incase.
I also moved my boot drive to a hotswappable ultrabay caddy, as I sometimes put it into an identical machine for a moment to test features, etc you name it.

I also noticed on boot, the Manjaro screen giving me a few seconds- however I’m sure this is because my computer is recognizing that Windows Boot Manager exists somewhere on a drive- surely? unrelated but figured I’d mention it. There’s an additional harddrive inside I recon that’s either Windows 10 or dual boot but low on the priority list and no actually used as of now.

Anyhow, love Yakuake… but it’s blinding me without a darkmode! Sorry for the excess of details here, I’m just not sure what might be left out/relevant. 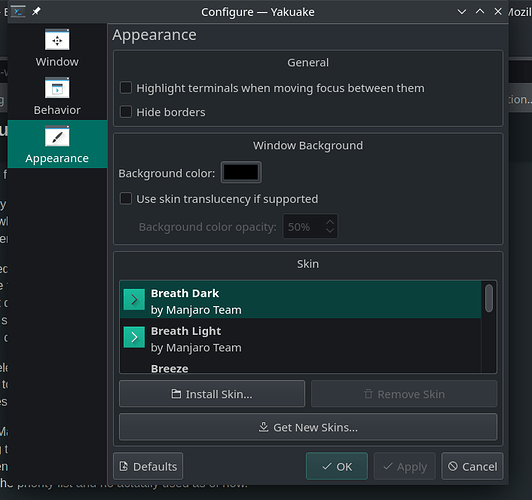 also check the appearance of your breath dark theme in issue still persists.