tl;dr Let me preface this by saying I realize yakuake is a terminal built for KDE (based on Konsole). I’d like to try it and don’t really grok how that would work since XFCE is emphatically not a KDE-based desktop environment.

So, I’m interested in trying the yakuake dropdown terminal, which is available via the official repos. It’s a KDE-based app (in fact, is built on top of Konsole). When I asked pacman to install it, just to see what packages it depended on, it listed an entire pile of KDE packages and some extra QT5 stuff I don’t already have.

To may lay eye, it looks like it’s trying to install enough of the KDE system to enable it to run, but not actually the whole thing? 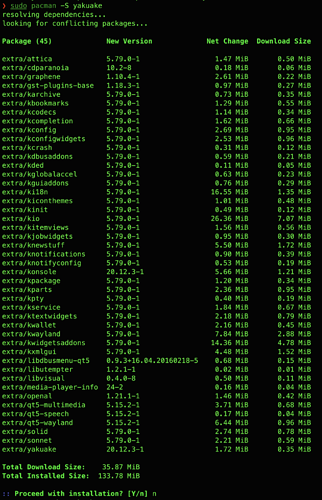 You don’t need to install all that crap just to do that.

Will start the window in drop-down mode (also called a Quake-style terminal). This will only apply to the first window started with this option. It is advised to bind this to a shortcut in the keyboard preferences.

Does not the drop down terminal appear by default with ctrl+alt+t in Manjaro XFCE?

When swapping from KDE yakuake uses F12 and it’s easier to keep the same key.

Thanks! I had no idea XFCE could do this. Even better, running it with this flag adds an additional tab to the preferences, allowing for some drop-down specific settings adjustment.

Additionally, I just realized guake is available in the official repos. It’s a version of Yakuake built using GTK3. I’ll probably experiment with that later. Since GTK3 is alraedy part of XFCE, the install is much lighter. 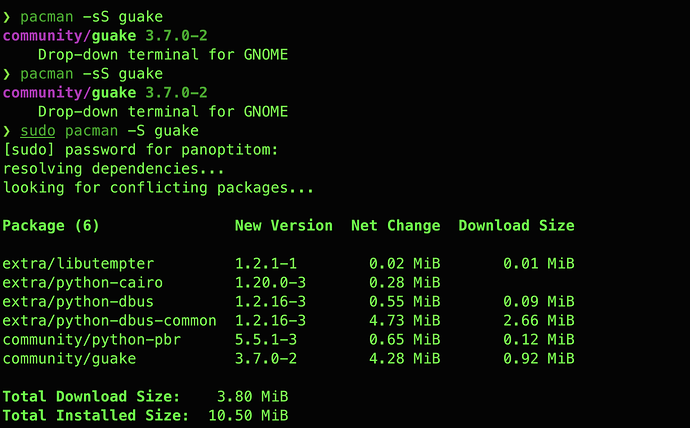 I’ve also installed Tillix so I can start practicing with tiling terminal emulators.