I have successfully replace xfce4 panel with tint2 panel.

I have disabled, not removed, xfce4 panel.

unfortunately, now when I press ‘Super’ on its own I get an error message:

‘… The name org.xfce.Panel was not provided by any .service file.’

I can’t see where ‘Super’ is mapped or how to stop this message appearing.

create a shortcut using the super key & when asked, say yes to override.

create shortcut in which setting program?

There is nothing defined under Super in xfce4-keyboard-settings

Edit: running xfce4-popup-whiskermenu from terminal returns the same error and no menu.

the plugin only works if xfce4-panel is running & the applet is on the panel.
i thought you wanted to map the Super key to something else.

the panel & all it’s plugins only work with xfce4-panel running.

if i remember right, tint2 has a application menu you can add to the panel.

xfce4 is a great panel, not sure why you want to replace.

i thought you wanted to map the Super key to something else.

I don’t want xfce4-panel or xfce4-whiskermenu-plugin, I was just providing more information to help find a solution.

map the super key to /dev/null

Thanks there are at least three places keyboard bindings are set, xfce4-keyboard-settings xfwm4-settings and xfwm4-tweaks-settings.

If I map Super to /dev/null I get two error messages when I press Super. The service unknown one and ‘permission denied’.

I’ve tried listing the systemd services installed one this and previous working installation, to no avail.

Not sure what GDBus.Error:org.freedesktop.DBus.Error.ServiceUnknown relates to?

ref How to List Systemd Services in Linux [Beginner's Guide]

not sure then, i don’t have a current xfce4 install, needed the drive for something else.

hopefully someone running xfce4 can give ya a hand.

Thanks for trying, it gave me some ideas, and now I have found the solution.

Solution: It turn outs left ‘Super L’ and left ‘Alt L’ + ‘F1’ are treated as the same thing - whiskers menu was defined in xfce4-keyboard-settings under ‘Alt’ + ‘F1’ - so I missed it looking for Super.

glad you figured it out.

that kind of thing would drive me crazy.

i wrote this script for xfce4-panel genmon & tint2’s execute, it’s a system monitor.

i’m on xfce4, so i thought i would revisit that code.
if you install ttf-font-awesome, you can have text icons.

reboot required after font install, for the system to detect.
want to see if it works in tint2? 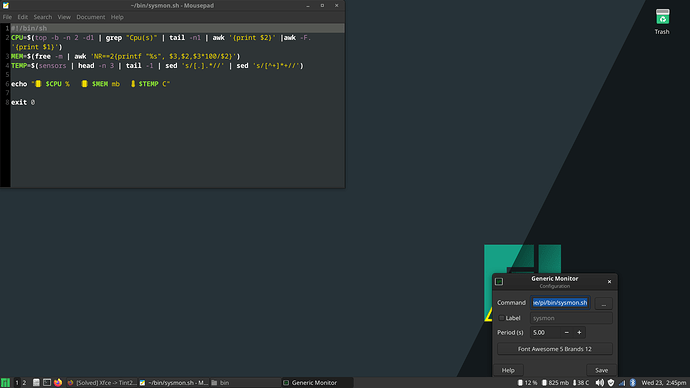 i added percentage of disk used, i’m on an rpi400 running from an sd card, so it’s something you’ll need to change to your drive. df -H / in terminal should give you your /dev/* (most likely sda).