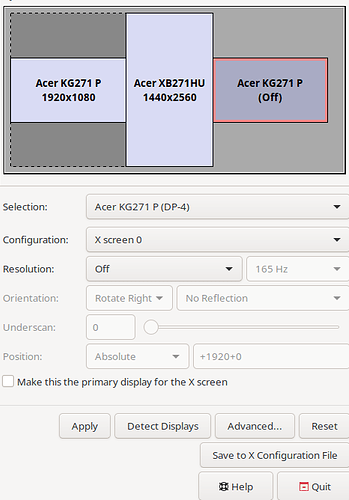 it seems that my DE crashes and resets display settings, disabling both KG271’s, so only my XB271HU is enabled.

I did do an update yesterday which updated a vast number of packages including (cat /var/log/pacman.log):

Does anyone have an idea where I can start debugging this?

I would greatly appreciate some tipps

What GPU?
Some models have issues with the latest drivers when comes to Display Port or some like that

You could probably try to make use of the video-nvidia-470xx drivers instead.

Also, instead of enabling that monitor from Nvidia Settings, do it from the System Settings. As it seems you are on KDE Plasma … do that first, then try to open Nvidia Settings. Also, if you want to make a fixed layout, don’t forget: the correct file to alter is /etc/X11/mhwd.d/nvidia.conf

I just tried 470xx but it’s the same effect.

I had to use nvidia-settings because enabling them only in KDE Display settings had/has no effect at all.
I used nvidia-settings to save the config file after editing following this guide to /etc/X11/mhwd.d/nvidia.conf from the manjaro wiki.

I got it working now by using the nouveau drivers but now I run into another very strange issue. As soon as I bump the refresh rate of the third monitor to more than 60 Hz it starts flickering. On my windows I don’t have those problems so I don’t think it’s the cable nor the monitor… I’m very confused here

Nvidia Linux drivers never had the same stability and performance as the Nvidia drivers on Windows OS. Nouveau drivers are even less performant, and rely on reverse engineered code, and while they might seem to work in some cases, fail in other …

I have a GTX 960 and never had any issues with the Nvidia drivers, dual display works fine, but both displays are 60Hz, and both are connected via DVI. With Display Port maybe other models are affected by the latest drivers, but if you have the same issue with 470xx driver, then you can look into enabling early KMS.

sudo mhwd -r pci video-linux then sudo mhwd -i pci video-nvidia On gnome you might have to enable early kms. As administrator edit the /etc/mkinitcpio.conf and make the MODULES= line like this MODULES=(nvidia nvidia_modeset nvidia_uvm nvidia_drm) then run from terminal: sudo mkinitcpio -P sudo update-grub Also, you probably have autologin on and is trying wayland session and not always starts (at least on my end does funky things)

to /etc/mkinitcpio.conf. Restarted and it works again.

Thank you very very much for your help