Would you recommend the *latest* KDE Plasma 20 to a new Manjaro user?

Thanks for the quick response. Im looking at nvidia gpu, gaming, raw photo editing, and low latency audio interface and DAW compatibilities. If thats of any help
Edit: Also desktop interface community configs or widgets, I mean do the older versions has any kind of more content available?

This doesn’t seem a productive discussion for a support forum. There are tons of info about this.

What would you say are the major benefits of using an older version of KDE, and which version would that be?

This isn’t an easy thing to achieve on a rolling release distro because of dependencies. You need to roll together with the available packages, unless you do your own building and packaging.

I’ll move this to the DE subforum.

Thanks, that subforum works well for me. Althought I dont believe the title to be misguiding. Im asking to the community if a new Manjaro user with little knowledge on rolling distros would find an older release more stable and more suitable for their (my) needs. Which would prefer having the largest possible amount of packages available. Maybe im really just overestimating such ‘inestability’… I really havent found much info on that regard concerning said release.

Only yourself can answer this question. Install it in VM for example and test it.

Alright i guess im just bad at communicating my problems. I just wanted some insight, also my system specs cant really replicate such enviroment in a VM.

Been using for a while the KDE Plasma 4 in the past.
Now i’m using KDE Plasma 5 on testing branch and the git version on unstable branch.
There are improvements and there are some regressions from what was possible at some point. Overall i’m satisfied with everything and the fact that i can make it look anything but like KDE Plasma default, is another plus.
The most important thing for me was to be able to make it so that is 100% compatible with my 3 types of workflows. All this with a very small memory footprint.
I would recommend any time to be used

There are pros and cons depending on what you want to get out of a KDE environment as concerns an older and newer version. Stability? I’ve been using KDE Plasma in most of its versions since 2017, and with other distros as well. They’re all pretty much stable as in nearly rock-solid with minor niggles here-and-there from time-to-time. But never anything to be considered a game changer…!

If you’re new, why not go for Gnome?

I’ve been running KDE on the testing branch for about two years now. In that time I’ve never had a system break due to plasma. Sure the occasional bug slips though, but they are quickly fixed.

The best advice I can offer is to make use of timeshift and have a Manjaro iso at the ready.

We are all familiar with burning live usb stick to boot our Manjaro isos. That is useful when you are installing manjaro on a new machine. However, if you already have linux installed with grub, there is a better way to boot Manjaro iso files. I usually do this when I test new iso files for a new release or when I need to use a rescue system because one of my experiments rendered my installation unbootable. You can boot the iso file directly from your hard drive without burning an usb stick. No…

A few things you need to know about backups: One copy does not constitute a good backup! The most important to a good backup solution is an easy and fast restore ! Backup files should be stored on an external disk that gets connected to the system only during a backup or restore cycle so that RansomWare cannot encrypt your backup when it stumbles into your system through wine ! Alternatively, you can use a NAS directory that is protected by a password and that gets only mounted during a backup…

I don’t like Gnome since beggin. Since then I have used KDE Plasma 5+ and I am very satisfied.

id say that KDE is probably the most noob friendly DE, other DEs either need to relearn, or have weird quircks

Hi, I both gaming (steam native) and have Nvidia Gpu on Manjaro Plasma. No problems.

Hey, running nvidia 450xx and kernel 5.4, massive stutters and fps drops, cant get the nvidia configs to save, probably because i chose free drivers by mistake. Im trying to reinstall manjaro but booting from the old usb gets stuck in “a start job in running for livemedia mhwd script”
Know of any different way of reinstalling it?. ive got it on a ssd, with my windows files on a hdd (uefi) mounted on it
ps. im sticking with it if i manage to fix those issues, really slick interface and repositories, havent tried the Real Time kernel yet

Interesting. I know this has nothing to do with the conversation, but as I’m currently running Plasma and I’m planning on building a second rig for gaming any time now, I wasn’t sure about sticking with Plasma or going over to XFCE. Having already bought everything that’s needed, and possessing an NVIDIA GPU getting the right drivers can pose a problems or two… What are your 2 cents on the matter?

If you download the latest .iso of Manjaro Plasma and choose Non-free driver at bootup you’ll get the driver that fits your card. That’s it. Nothing more needs to be done.

I just downloaded the latest and done what I described. I have a 1070 Nvidia card and no hassle.

Are you using xorg or wayland? Kernel .8 works just about the same. I think i should reinstall, What would b the best way to do so?

'I use xorg. I don’t think Nvidia is wayland ready(?).
I installed the latest .iso with Plasma minimal edition. At bootup choose non-free drivers, eventually set up keyboard etc. When doing so the default kernel will be 5.8.x and the nvidia driver will be 450. 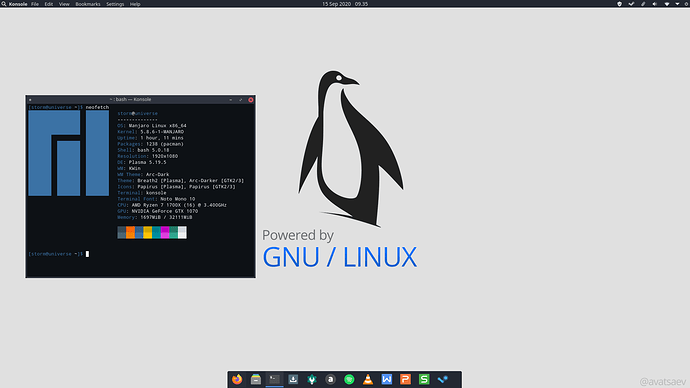