Why not auto-delete old kernels?

I installed the updates, the problem was i used the Kernel 5.11 and my OS was not able to display anything and froze after I started it.

I had to press shift to change the kernel to 5.10 now it runs.
it would be awesome if it would remove unsupported kernels and not boot with them.

Yeah. It would be very cool. If Manjaro comes with lts kernel by default. Most of us don’t need latest kernel.

That’s not Linux’s nor Manjaro’s philosophy: You are master of your machine!

Your machine, your choice, your responsibility!

Most of us don’t need latest kernel.

Do you have any statistics about that dude ?

5.9 EOL because they want / need to, and that’s their choice!

but its a bad idea in case of security

I even have one machine running 4.19, since any more recent kernel straight up wont boot…
So yeah, please dont mess with the kernels i keep around for a reason.

4.19 is an LTS, so that should be supported for a year or two still.

But that’s the point. If you want to or have to - you can do it, it’s your responsibility and your only.

That’s why I love Linux and I’m using it more than Windows. I understand that some people need automation with their systems and that’s OK. But I want full control over what’s happening with my PC.

That kinda wasnt the point, since this will be the last kernel this machine will ever run.
Even if its 5 years from now, loooong after support ended.

Which isnt all that uncommon, at work we have plenty of servers still that run no longer
supported versions of their corresponding distros.
Despite our efforts to upgrade them… Its an endless cycle.
One of the reasons i love Manjaro(well any rolling release really).
Dist-upgrade? Never heard of it…

I assume you reported your issues upstream?

Also, 4.19 is going to be supported by CIP until 2029: civilinfrastructureplatform:start [Wiki]

Why not auto-delete the kernel? Support

That’s not Linux’s nor Manjaro’s philosophy: You are master of your machine! Want to keep old unsupported kernels? Fine! Want LTS kernels only just like me? Also fine! Want Experimental RC kernels and file bugs to the kernel team yourself? Also great! Want kernels deleted automatically? Big no no, because some people here are still running on 5.9 EOL because they want / need to, and that’s their choice! Your machine, your choice, your responsibility!

If Manjaro comes with lts kernel by default.

Then I might have serious problems with MY hardware…

I always install and test the kernel with each update… and for two kernels last year I went back to an LTS kernel, but mostly I stick with the current choice.

My opinion is to have at least 2 latest cores, one of which is LTS. I have a total of 3! 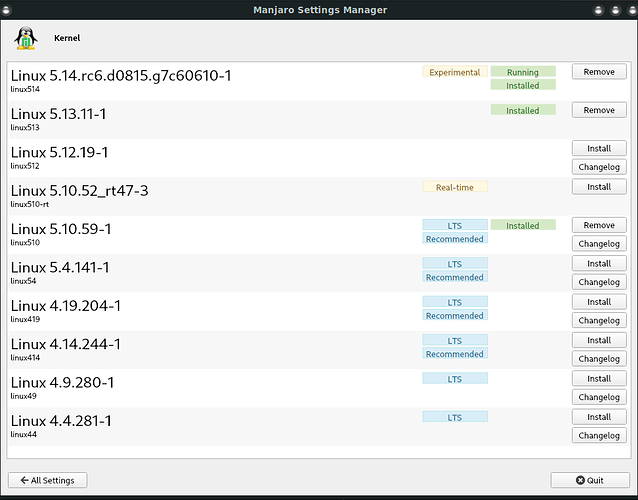 Why not auto-delete old kernels

Because this is not Windows - the system is yours …

Your machine, your choice, your responsibility!