Why have major releases when Manjaro is rolling?

I would think that having a versioned ISO when the distro itself does not use versions would cause confusion. And why wait so long between releasing new ISOs instead of just shipping a new one after every stable update?

Or that’s what I think.

People that don’t have Mnajaro installed yet, but want to have it, what would be rolling exactly?
The only way to distinguish an old ISO, that might install but not update, versus a new ISO from the stable snap, is by having a sort of versioning…

Imagine installing a 5 year old iso and then installing all the updates, it would be carnage. I Kind of get your point about version number but every arch based distro I know either uses a live installer to pull the latest packages or publishes several isos a year

In my post I did not bring up using only the original ISO, I actually said the opposite which is updating it alongside stable branch. IIRC 22 is releasing 6 months after 21, and I have seen some reviews of Manjaro 21 criticizing it for having to install 6 months of updates out of the box.

having to install 6 months of updates out of the box.

I don’t understand what that means.

But “six months of updates” is not relevant. An older package is replaced by the latest package; regardless of how much time has passed.

The update download size and time aren’t that much different between waiting one month or six months, since Manjaro releases Stable Updates in curated batches (unlike Arch or Endeavor, which just publishes their updated packages as soon as they’re available.)

What can have an effect of high consequence is when there are major changes that were introduced within that time, in which they might require manual intervention (or at least for the user to understand what to look out for).

For Manjaro Sway, we’re doing just (at least) weekly releases and delete the older ones. Fixing forward is just easier and I too don’t really get the point (aside from marketing).

Version names /numbers aren’t important at all as long as the relese isos are regularly updated.

I guess giving release versions let’s people now the isos have been updated recently which is a good thing. I always keep an upto date bootable USB incase I ever need to recover a none booting system

The version only applies to the install media. Update can change the installed version. Thats easily checked with cat /etc/lsb-release.
The version numbers also help when diagnosing issues. A few times already I have come across posts with people attempting to install very old install media and wondering why it wont update. The issue is the keys used to sign the packages is outdated and its a royal pain to fix that issue. You are better off starting over with up to date install media.

If you install from a more recent one, you don’t have to deal with as much change right of the bat.
The distribution evolves over time - if you follow the updates there is rarely a problem and you’ll always be and stay current.
You miss that evolution when you install from an old release - it will show as soon as you try to update your shiny new, freshly installed system, which is in the state from … months or years ago.

You’ll not have to do each update that came in between - but you’ll have to deal with all the changes that occurred over time all at once.
Not huge and numerous updates to get current, but still potentially huge problems, especially for novices.

If you install from a more recent one, you don’t have to deal with as much change right of the bat.

Before the latest release, the most up to date ISO was 6 (IIRC) months out of date. For example, shipping Plasma 5.24.dont-remember instead of 5.26.4. My question was about why the ISO should be so old to comply with an arbitrary version number instead of following stable relases.

I would think that having a versioned ISO when the distro itself does not use versions would cause confusion.

I wasn’t confused, when I decided to move from a versioning OS, Linux Mint, to Manjaro.

In fact, if there had not been an ISO available, I could not have moved to Manjaro, if the ISO was not a snapshot of the most recent software, it would certainly have caused problems.

And why wait so long between releasing new ISOs instead of just shipping a new one after every stable update?

Probably because it’s less work for overworked maintainers, and because it’s not necessary to go to that extent.

shipping a new one after every stable update?

Don’t forget there is always a monthly snapshot here: 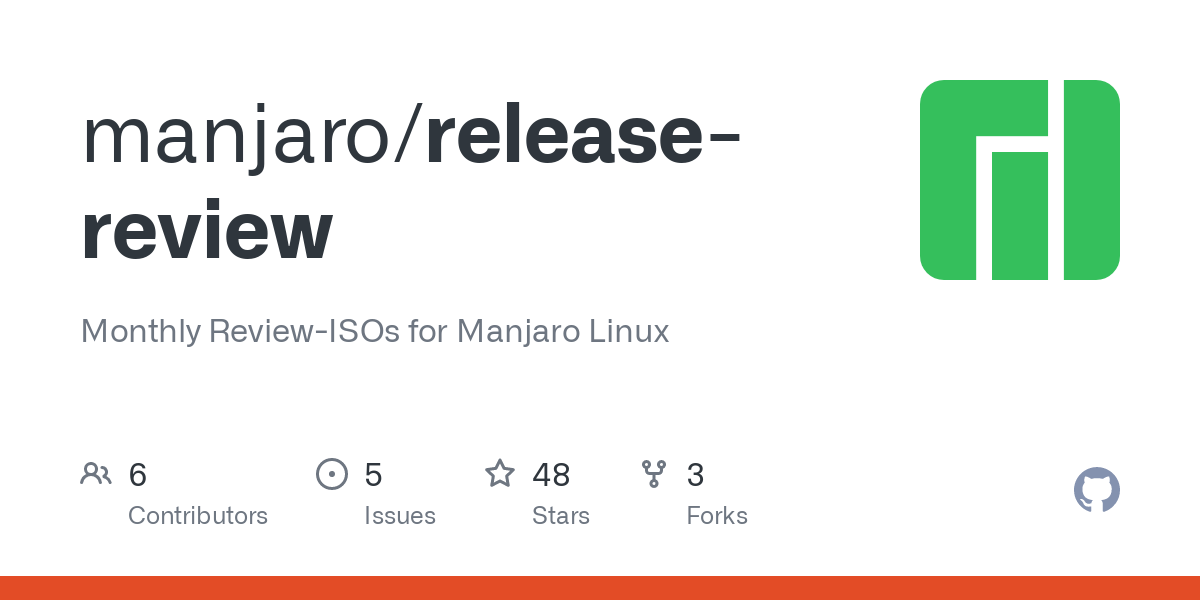 Monthly Review-ISOs for Manjaro Linux. Contribute to manjaro/release-review development by creating an account on GitHub.

Oh that’s neat. Might be useful to link it somewhere on Manjaro Downloads though, as I had no idea that even existed.