Why does the `web-installer-url-handler` update demand 600 MiB of dependencies?

I am on stable. Why do 2 small updates demand 170 MiB of updates? 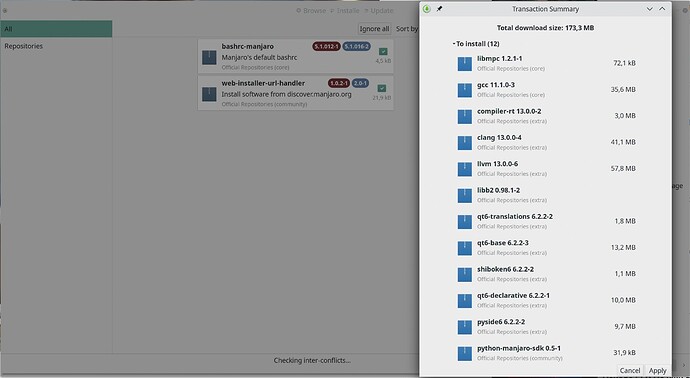 Those are dependencies for the new web-installer-url-handler update as it’s been ported to PySide6.

Why would I want to install so many libraries just to be able to install something from discover.manjaro.org?

Also, weirdly, the dialog shows wrongs lib sizes, so I guess it’s not 170 MiB, but much more than 500 MiB. All this is a terrible bloatware, that I don’t want to take space on my desktop.

Usually, you need the compiler for building a custom kernel.
Also: the compiler is part of the Linux Standard Base.

pamac shows the installed size and not the downloaded size (which is 170MB in this case).

alternatively you can get rid of manjaro-hello and skip this whole episode, provided you are not going to install from discover.manjaro.org

I didn’t think it was needed but realized in a rolling release you are going to be spending lots of time eliminating things you may not need if you start doing that - better to accept it all & just not use it - until you do.
Am I being shortsighted? Something else one should consider about a rolling release & selectivity?

Later I found the flatpack/snap installer off of Hello has been replaced with this, it appears.

Thanks in advance for your insights

it depends, I’ve installed manjaro from minimal installation, so i think it was pretty lean to begin with. I’ve trimmed it down since then with things that i absolutely don’t use like in this case “manjaro-hello”, i did use it initially while installing apps but since then no. if you are recurring user you should totally keep it.

for the minute apps i use from AUR so far none has required clang or llvm so currently it’ll be bloat, but who knows, tomorrow i might need them. so right now I’ve no reason to keep it. I’m pretty sure there are other bloat i haven’t noticed so far. but you really should be knowing what you doing when doing these trimming. take even optional dependencies into consideration. basically i also think of the kind of “dent” it will leave and decide against it at times

wait you can remove manjaro-hello without breaking anything?

yes, is pretty self contained app. removing it will take with it the topic starter web-url-installer thingee with it.

Thanks for your thoughts on this.
I checked the llvm dependencies as the 274MB seemed kinda steep to me, but saw oodles of important stuff using llvm - and there was previously an even bigger “toolchain”.
But it was impressive how many components seem to use. More importantly the kernel itself apparently is using clang/llvm to help reduce memory requirements, as alluded to by Keruskerfuerst, and seems to be the trend in Linux distros (i.e OpenSUSE Tumbleweed rolling release).

wait you can remove manjaro-hello without breaking anything?

That’s one of the first thing I instantly remove after an installation. It is not really useful to me, maybe to a new user, as it contains links to Manjaro related stuff, has a quick access to programs to install on first boot, things like that, but it is definitely not something your system NEEDS (and if you still want to thing web-installer-url-handler to be able to use Discover to install from it if I understood correctly (Discover is also something I would remove instantly :D), then install it manually.

Looks like you just have to be careful because if you use the pamac GUI it tries to remove a lot of stuff as Orphans. like Wayland, and Vulken lol

What? Removing manjaro-hello from Pamac, removes also Wayland and Vulkan stuff? Allow me to doubt it. Can you show us what it does for you so we could verify what you’re saying?

To akin2Silver:
Aha, thanks for mentioning “orphans”.
i DID do a “Pacman -R --unneeded” just before many Vulkan issues appeared, better reinstall.
Thanks & Best Wishes 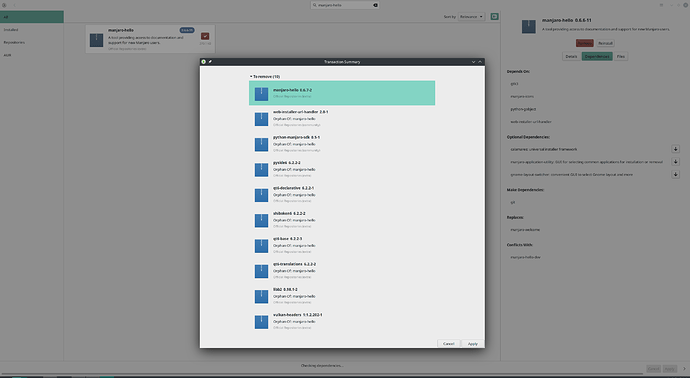 So there is that list, some of these are marked as dependencies for Wayland as well.

I don’t see Wayland here. I’m curious what you’re talking about, if that was Wayland dependencies, shouldn’t Wayland be in the list here in the packages ‘to remove’?

So it is just normal operation here to me, nothing suspicious.