Why does the HP scanner plugin vanish during a Manjaro SW update?

Today, 2021-10-04, I experienced again that immediately after the reboot after Manjaro SW update I was unable to use the Simple Scan app. I looked up my notes from previous updates. In accordance with the notes I connected my HP All-in-one via USB cable with my PC, invoked the HP-toolbox in a terminal window and immediately was told that I need to download and install an HP scanner driver plugin. I did so and the Simple Scan app worked again.

Now my question is: why did the Manjaro update remove that plugin? Is there a way to prevent that in future updates? Is that a Manjaro error that the developers should fix?

It is all so mysterious! HP does not tell precisely the name of the missing plugin. Manjaro does not tell me that or why it has removed SW compononents. I HATE UNNECESSARY AND INCOMPREHENSIBLE SECRETS ! Up to now I believed that Manjaro is open source, i.e. without coding secrets.

Now my question is: why did the Manjaro update remove that plugin?

It didn’t. The only time the update process will remove anything is if it is expressly being replaced by another package that does the same thing.

What is however likely is that your old plugin was still installed but no longer functional due to changes in the shared libraries brought about by the update process. And if you had installed that plugin yourself from HP’s website (or wherever) ─ I don’t know whether it’s available from the repos or perhaps from the AUR ─ then your package manager also has no knowledge about it.

Up to now I believed that Manjaro is open source, i.e. without coding secrets.

No need to be angry

Any changes to hplip packages is done upstream and is most likely triggered by changes in whatever packages is available from hp.

The resulting PKGBUILD build recipe is found on archlinux/packages

It may be worth looking at the changes for that package as well - please note that it has been flagged out of date - which means it is going to change at some point - and it is a gnome package so remember that gnome is it’s own.

The problem is back after I updated Manjaro on 2022-01-07. Again the necessary plugin is said to be missing, again there is no mentioning of its name.

However, in contrast to my earlier experience (which I had noted in detail) the hp-toolbox does not offer to download and install the missing plugin. Therefore I have no idea how to solve my problem!

Further observation: some Manjaro updates do not affect the scan function; therefore , it would be helpful for the future to know, which updates affect the mysterious plugin.

By the way, the xsane program also does not work, even after reinstall

Here some messages that I extracted:

If you somehow downloaded and installed the necessary scanner plugin from HP
instead of
installing it either via pacman (if it is in the repository, which it is probably not)
or via some AUR package which provides that same plugin
then the consequence is that the package manager does not know about it
and you have to take care of installing it yourself
every time the hplip package (which apparently does not contain that plugin) changes and causes the plugin to not work anymore.

If the plugin is installed from the AUR that package might simply need to be rebuilt
to match the hplip driver/filter.

Therefore I have no idea how to solve my problem!

As far as I know, so far only you know what plugin was necessary and was downloaded directly from HP somehow.
If it is available via AUR as well - use that and your life will be easier with regards to updates.

I don’t have that printer and all the info I know of is here:

Yes, if I could find out the name of the missing plugin I might search for it in the repositories.

From what I have read over the last couple of minutes
this printer/scanner does not require a plugin.

It is - from what I gathered - best used over the network, rather than USB.
(Avahi …)

hp-scan is the ‘HPLIP Scan Utility’. If you need that tool, you will need to install python-pillow.

During my search I also found your thread on:

I’d delete the printer and start the setup process fresh
perhaps by using the Cups interface(?) rather than the hp-toolbox?

All that is only guesswork since I don’t own a (and this one in particular) scanner.

With cups I could only install a printer, no scanner.

My solution today (which required about 8 hours!):
I used pamac to reinstall hplip from the AUR repository.
I started the hp-toolbox again, device discovery.

All of a sudden the “driver plugin installation” dialog popped up again. (I am unable to tell why and under which conditions.) I only recorded the sequence of dialog windows. See below, in particular you can see that the name of the plugin remains a secret! Moreover the plugin seems to be missing in the AUR repository. 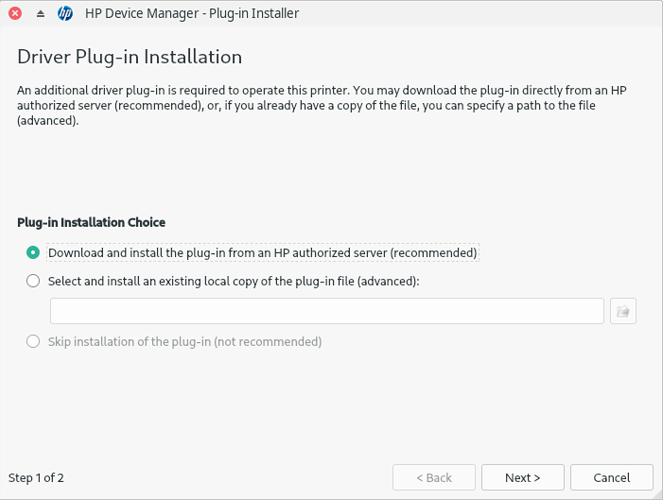 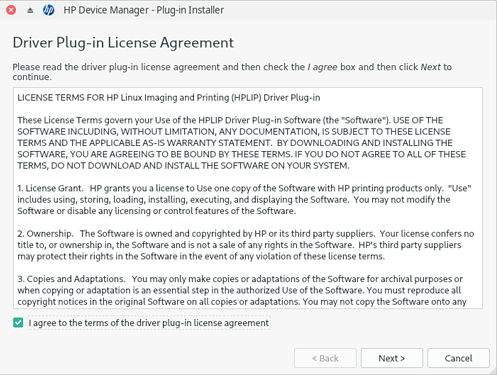 The plugin (if one is indeed even needed) might be provided by this (or downloaded with the help of it):
https://aur.archlinux.org/packages/hplip-plugin/

Also, the Arch wiki I linked to mentions how to use the command line utilities

I’d use these rather than the GUI tool you used. But that is just me.

If you use these, the install process might be more transparent and you would see what was downloaded and where it is stored/installed
probably somewhere in /etc
or in ~/.config

There is also documentation installed in
/usr/share/doc/hplip-3.21/index.html

that is all I “know”

I am still quite upset about the difficulty and complexity! I do not understand why the plugin is not always installed together with hplip.

Having inspected my system in more detail I found the plugin that I installed today in an unexpected place:

Unexpected, because /var… is a place for temporary data.
So I continued searching and found it also in

I do not understand why the plugin is not always installed together with hplip.

being upset doesn’t help, it’s understandable but isn’t nice for you,
doesn’t really affect anyone else
and so far
only hp and you are in a position to know what is happening

… I recommended to use the Arch wiki and the there mentioned command line utilities instead of the way you went (or seemed to have went).

@jolexin A couple of my users have an HP printer. I’ve had to run the following after every hplip update since getting them setup a few years ago to get the scanner working:

i had not noticed the hplip-pluginAUR package before. Thanks for pointing that out @Nachlese. However, I’m fairly certain that the plugin version is tied to the hplip binary, so AUR and manjaro repos are likely to be frequently out of sync (kinda like virtualbox and the extention package from the AUR). I’ll try it for a while, but it may end up being more of a hassle than just manually updating the plugin.

If anyone has already installed the plugin via the hp device manager interface or command line, you’ll need to overwrite the existing files if you want to install hplip-plugin from the AUR. This should work (assuming you have yay installed):