Why does Brave Browser not get updated frequently?

(Apologies in advance if this is not the correct category, it seemed to fit what I am asking.)

I was wondering if anyone could help shed some light as to why is Brave browser not updated frequently? The most recent version should be 1.28.105 as of writing this on August 14th, 2021. When I go to check for updates, the official repositories is only on 1.27.110-1. There was a time that was not updated for a while so I switched over to the AUR version which at that time supported the then latest edition which was 1.26.71? I also switched to the AUR version because even the Brave website instructions for updating on Linux for distros such as Manjaro says to use the brave-bin versions. Before when I was on the official repo version of Brave, if I went to about Brave in the browser to check which version I was on, it would always show it was an unofficial build. After switching to AUR version it now shows it is an official build. I do see there is another version of Brave in the updates but I am not sure if that is official or not. I once tried downloading that and at the end it was showing someones email who it was maintained by and I kind of freaked out and cancelled the update. (The one at the top that shows brave 1.28.105-1.)

I have a test laptop with Ubuntu installed and Ubuntu stays up to date on the brave updates through their package updater.

I understand there is a lot of hate and reservations about Brave so I am wondering if the community does not trust it and delays updates for a long time, however, it is very behind in versions; in my case 5 versions behind. For those that do not know Brave, being on at least version 1.27 is important for a few new changes to their ads system. I have tried looking at the other Brave browser update threads on this site, however, most were from 2020. The most helpful ones were the ones talking about switching over to AUR versions, but now even that is not staying up to date. I understand AUR is not maintained or supported by Manjaro, so that may be a lot of it, but even the official repo version is still a few updates behind, and as I said earlier, if I go to about Brave it says it is an unofficial build.

I reached out to an admin on the brave community forums and he had suggested I reached out here on the actual forums for more help. I am also not the most computer savvy person as I do not know command prompts, truly what binary releases mean etc. It is probably a miracle in itself I was able to get away from Windows and be on Linux. Lol.

Everyone thank you for your time and a thousand apologies in advanced if this is in the wrong category/been answered before. Any help or clarification would be greatly appreciated!

From what I’ve read on the forums Brave was dropped from the repos and then readded because their git page was a mess. That’s probably why there wasn’t many updates. Also compiling a browser takes hours so devs don’t want to compile unless they need to

Contrary to other browsers coming directly from Arch, Brave is normally only available through AUR.

It’s been ported to Manjaro but it’s not always the top priority for developers, or forgotten.

Use brave (bin version if I’m correct, already compiled) from AUR if you want to follow all the updates.

At the Moment because i m in a holiday state…

Thanks everyone for the kind replies. Makes sense to drop it if it is a mess. Brave not gonna lie, is a bit of a mess. But I still use it as my main browser so it just is nice to have it up to date. It is to my understanding brave-bin is what is the official recommendation from Brave to use for Arch users as they only really support Ubuntu , Fedora , open suse amongst a few others. @sawdoctor @Falav . And @Ste74 if you could so kindly update it whenever you get back from your vacay that would be so awesome!

You can update yourself, i have modified the pkgbuild to obtain the last version automatically whitout search in the brave repository ( Is a hell to Explore there the version )
So you can open the terminal and type

Then go inside the folder called brave

After build you should have the last brave stable version

@Ste74 I was wondering do you have a pkgbuild for automatically getting the version for the beta version as well?

Thanks! Seems to be working! Ads transferred over and all the important new features post version 1.27. However, does it matter that it shows the build as unknown? Still seems to be working. 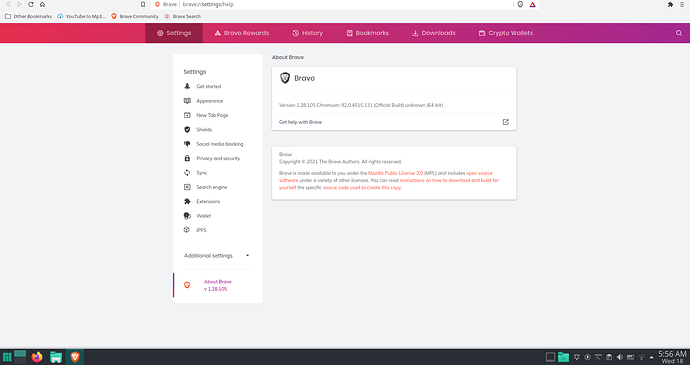