When will Nvidia drop support for the 900 series?

Since my GTX 970 is getting long in the tooth, I’m worried about this. Normally don’t keep a Graphics Card this long. But due to lack of Funds causing wasting money and now being overpriced, I don’t expect to buy another anytime soon.

So anyone know sort of when?

I guess that’s something to ask to Nvidia.

//EDIT: anyway, your card will be supported by the 470 series driver so no big deal yet.

Well yes, but wouldn’t Nvidia be releasing newer drivers until then?

I mean when your card will be dropped from the latest Nvidia drivers, you could still fallback to the 470 series driver. Manjaro provides the latest and greatest Nvidia driver (video-nvidia currently at version 495), and the previous Stable branch driver (video-nvidia-470xx which is latest stable driver, for all the recently dropped cards from the latest and greatest driver). The down side is that the 470 series driver is not receiving any new feature, but I guess you card wouldn’t support any new feature anyway.

The day your card is not supported anymore by the latest driver, then you could fallback on the 470 series driver

Besides what @omano said, and from what I’ve read, cards are supported for about 9 or 10 years. So I feel there’s no reason to get too anxious yet (I say this from a desktop with a 750Ti card). Losing support in the current driver isn’t as bad as it sounds either. Legacy drivers are offered.

Furthermore, in the event that your card goes completely unsupported, those drivers are available for manual installation should you want to do the work yourself or there’s always the option to use nouveau. Also some distro’s offer older drivers than manjaro, so switching might be an option to consider when the time comes but that wont be for many years yet for you.

my GTX 970 is getting long in the tooth

So it looks like there’s currently no need to worry

Sorry if I across as having a Panic Attack. This is caused by both Nvidia Dropping support for the 600/700 Series from it’s current drivers. A Poster on Linus Tech Tech Tips mentioned that the company drops support for older GPUs ~8 Years. Nevermind I forgotten that I could have checked for myself.

I end up reinstalling Manjaro recently by trying to if GTX 760 works when the fans died on my 970. The 760 of course isn’t support by the recent drivers. I thought the 970 die after I put it back in.

Turns out it didn’t but must forgot something because it work fine. Odered new fans and replaced those on 970. Fixed.

Why I disn’t that to begin with? I still have the Bookmarks I lost… I manage to recover some old ones from 2017…

NVIDIA will set EOL for Maxwell next, but nobody knows when. 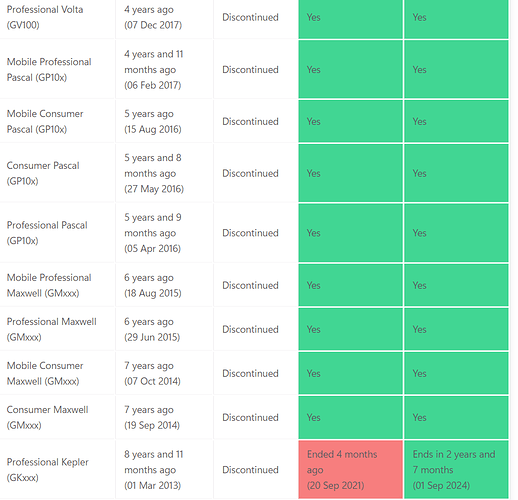 This is caused by both Nvidia Dropping support for the 600/700 Series from it’s current drivers. A Poster on Linus Tech Tech Tips mentioned that the company drops support for older GPUs ~8 Years

That’s not really true, these cards are still supported in the 470 Stable branch of their driver, which Manjaro provides as I said before. So for your older card you just need to install the 470 driver instead of the 495 driver, it is two clicks in the Manjaro Settings Manager.

Nvidia still supports these cards in the 470 driver, they will still maintain this driver but will not focus on this driver for now on, the focus development on their 495+ drivers now.

This is caused by both Nvidia Dropping support for the 600/700 Series from it’s current drivers.

At least the 700 series appears to be still supported, even by the latest beta drivers.

Then how come my 760 doesn’t load in Manjaro with the latest drivers then? I would have to change to the 470 drivers.

while my 750 card, despite the lower number, is, as said, still supported by the latest driver. This is, obviously, something to understand for Nvidia insiders only

You are still using the GTX 750 Ti, while I still have the 760 which I replaced with the 970. Seems strange that the Beta Drivers still supports the 700 Series…

Seems strange that the Beta Drivers still supports the 700 Series…

But as I said, to explain that further, insider knowledge may be necessary.

I think the 750 GPU is still sold by Nvidia to Card Manufactures.

From what I can gather it’s due to the underlying architecture used in those specific cards. Apparently the 750, 750ti, 745 cards are not kepler based and that’s probably why they’re still supported.

Want to point out something, series numbers like “900 series” and “700 series” do not mean anything. What matters when it comes to support is architecture.

In addition NVIDIA usually gives a few years of heads up (for Kepler Desktop it gave 3 years).

This has never been the case and it is inaccurate, since newer GPUs can use older architectures. First Fermi GPU for example came out in 2010, last one came out in 2014 I believe, that’s 4 years apart.

If you start counting with the first Fermi GPU, NVIDIA supported Fermi for 12 years (ends this December)

Also want to point out that if you keep using series numbers for support you’ll be leaving a lot of details out, like what the link @FadeMind sent which I wrote specifies at the bottom: NVIDIA GPUs | endoflife.date

you could still fallback to the 470 series driver

Per NVIDIA documentation and history each time an architecture goes end of life it receives a LTSB for about 3 years, Maxwell will get its own branch when it goes EOL.

Also there are no new LTSB planned till at least 2024, so you can rest at ease. 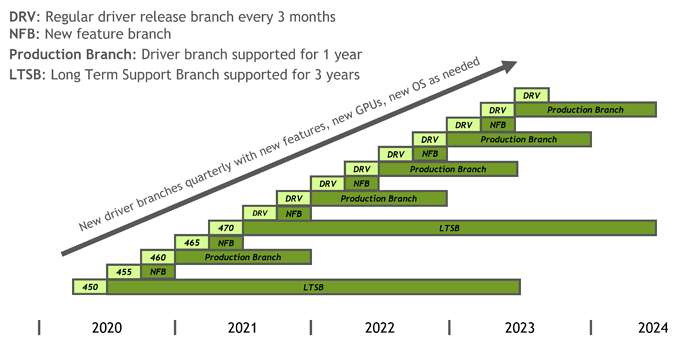 Rolling release Distros might be different here, but how long is Old Hardware still supported? But now I’m thinking that even if lets say Manjaro will run, but very few of the Major Applications will do so. such as Firefox, for example…

Thanks. Hopefully I’ll would replace my 970 before then.

Manjaro supports an NVIDIA driver as long as NVIDIA supports it with few exceptions.

You REALLY don’t have to worry at all about your GPU losing full support anytime soon. Like I said no new LTSB are planned till at least 2024, and even if there were like I said laptops usually lose support before their desktop counterparts.

Maxwell isn’t even that old, NVIDIA is still very well invested into the architecture just by looking at the Jetson Nanos and the Switch which are based off Maxwell and only a couple years old.

Also main reason NVIDIA usually drops support is because of incompatibilities with newer APIs or other limitations. Maxwell has the same hardware capabilities in most APIs as that of Pascal and Turing, which aren’t going to lose support in this decade.

Really, don’t worry, your card is still well supported and likely will be for some time