Whats the deal with the mascot thing?

I wonder is it a Penguin/Robot/Human Sperm hybrid? What is it supposed to symbolize? Does it have any meaning? Just trying to wrap my brain around the image, it seems as if it a bastardized version of Tux. lol

I wonder is it a Penguin/Robot/Human Sperm?

Your browser search history must be… interesting.

I guess that mascot is named “Jaro”, based on the image’s filename.

My browser history… interesting? Your mind… twisted. What does “Jaro” look like to a you? Just wondering. LOL
BTW Winnie is the name of my wife! Winfred Ann actually but she goes by winnie. She hates her name because it was her grannies name and for years she only met old people with the name, until our son met his wife Winifred ann who goes by winnie! ROFL

If that is the case then Tux is a bastardized version of a penguin just by looking at the peculiar proportions used for it. Not to be disrespectful to Larry Ewing, but by the way he posed Tux represents laziness at best, and that left-hand holding the feet, was supposed to be a prediction of Stallman’s foot feeding or is Stallman that tries to give more meaning to Tux foot holding?
Back to Jaro.

What is it supposed to symbolize?

It is a fictional “character” so it can represent whatever the viewer wants to make of it. Since is fairly new to the Manjaro “world”, is not yet a symbol. The legend says that his home planet was struck by a nano-technological asteroid. As the lone survivor, Jaro got trough a set of mutations, merging with some of the nanites from the asteroid, that gave Jaro the ability to clone itself because has no reproductive organs anymore, uses maglev as means of movement, sometimes at very high speeds. Highly capable of cognition tasks and emotions. Can find itself enjoying silly things, not taking everything so serious

At some point, Jaro turned itself into TRONJARO and beat senseless a pesky penguin that invaded the forum … 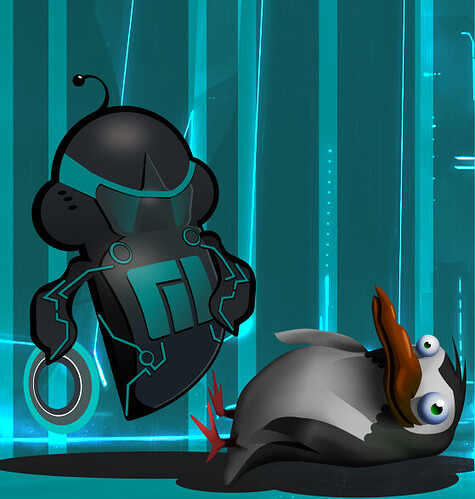 An the launcher on the ISO is next to perfect