What's the correct way to use iwd on manjaro?

I mean, I can go to arch page and see the instructions but a few things are not clear to me.
For example if I install iwd… is the plasma network tool going to do the job?
Or have i to use the iwd gtk gui?
In the case I install iwd… have i to do something more? May be… uninstall something or enable something more than iwd itself?
If I’m correctly understanding how it works I will be able to use iwd in a transparency way with the default network manager so… it’s like doing this:
Pamac install iwd
Systemctl enable iwd
Restart

And I’ll be using iwd since the start Vs the another way
Am I correct?
And now it’s like always, managing different wireless inside the plasma tool and so on, right?

I have seen some posts like the Debian ones that explain it very well. So… I’ll try tomorrow this things : NetworkManager/iwd - Debian Wiki
We’ll see how it works

What’s the correct way to use iwd on Manjaro? What if use NetworkManager with iwd?

If you want to use iwd on Manjaro in conjunction with NetworkManager, you can follow these steps:

After following these steps, iwd will be used as the wireless backend for NetworkManager on your Manjaro system. You can manage your wireless networks using the Plasma Network Manager tool or the NetworkManager applet, whichever you prefer.

I hope this helps! Let me know if you have any additional questions.

ChatGPT is just perfect for you

its actually crazy how “smart” it is when it is just language model
but be careful, its brilliant liar but this seems all correct
maybe adding warning that iwd has some issues with plasma-network widget, it doesnt show some details and etc… it has problems, quite a few of them afaik last time i tried it, so i recommend to use the “iwctl” rather
also they should disable wpa_supplicant service obviously if enabled

Agree … on a second look it has some minor issues, which I guess is just a result of outdated data.

Don’t enable iwd, since iwd gets started by NetworkManager.

But overall… it is a good start point. It just needs some corrections.

it’s supppose, in arch wiki, tha Network manager was the thing that enable and uses iwd that you dont have to 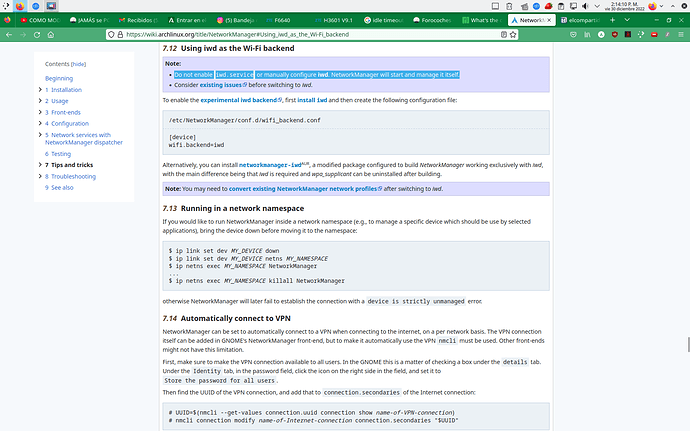 OUCH what is it chatgpt?? I don’t ever know it

okey, it’s what Ive said before that it’s not needed to update it. Thanks to all,.
Ill say how it works with my systemds because Im going to migrate gradually