I’m having a rather difficult time getting my Raspberry Pi 4 to boot up with the two latest versions of Manjaro: XFCE and KDE.

The problem is that when I boot, I can’t get past the raspberry splash screen. It’s attempting to do something that I cannot explain:

It wasn’t always this way as I’ve been successful at booting the XFCE version a week or two ago. Then decided to give KDE a try, but neither it or XFCE will work now on completely separate and new SD cards.

What am I missing?

What am I missing?

Not sure but for some reason it appears it is not seeing your boot partition on your sdcard and is looking for a usb drive to boot. Have you checked that the boot partition exists on the sdcard on another computer? How did you burn the image to the sdcard?.

I wouldn’t know how to check the boot partition. Any advice is welcome.

However, I can try another computer to see if the card can be read. As for imaging, I used Etcher, manually selected the file I downloaded from their site, chose the SD card and flashed. I also used the Raspberry Pi imager a couple of times with the same result.

It’s worth noting that many other people have had problems with using Etcher, something about it not matching a checksum during verification. But according to the developer, it shouldn’t be a problem.

How do I check for the boot partition, please? And if one is not found, do I just try re-imaging the card again?

Put the card in another computer and check if the boot partition files exist. I do not remember seeing your specific errors you posted. Do you have some type of usb device attached other than a mouse and keyboard. 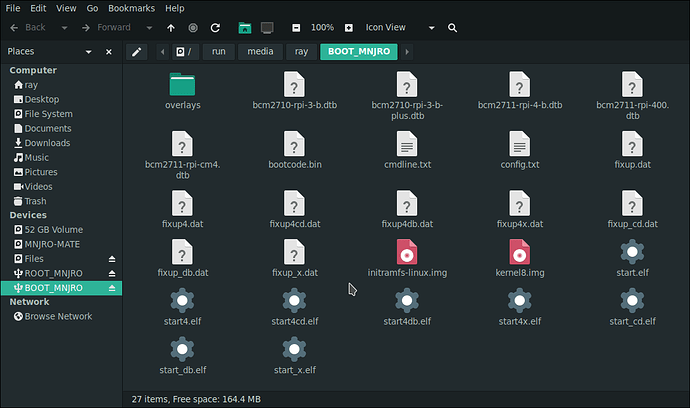 if you’re using usb-storage it’s possible that you’re running in timing problems because the default delay time for a usb-device is 2 seconds at the raspi-configuration. some devices are slower so you have to change the timeout-value at config.txt.
with
‘echo program_usb_timeout=1 | sudo tee -a /boot/config.txt’

That has been changed to program_usb_boot_timeout=1

I currently don’t have a computer with an SD slot, so I can’t check for the boot partition that way. However, and if it’s the same thing, when I view the SD card on my one computer, I do see a boot directory.

I’m currently redownloading manjaro and going to flash the card using a different card adapter – thinking maybe that might be causing problems.

@Olli
You asked if I was using USB storage. No, but I do have a USB connected that has two dongles: one for my keyboard, the other for my mouse. I’ll remove those before flashing again and see if that gets me moving forward.

I am experiencing the same thing, even if it is not happening systematically.

Every now and then the RPI4 fails to boot and enters in the loop described by the original poster. Power cycling the system generally does the trick and then the system boots fine.

What is noteworthy is that this behavior has started with some system upgrade. I have used this RPI for months and never experienced something similar before. I would tend to say that the issue has started in June/July. I would not be able to say whether after a kernel or firmware update.

My setup has the system booting from a rotating USB disk attached to a powered hub.

@callegar
Could you please elaborate on what you mean about “power cycling the system”? If you mean shutting the Pi down and back up again until it works, how many times?

I’ve reimaged the card to no avail, I keep getting the same loop as I originally posted on boot up.

Ok, I’m beginning to wonder if my pi is somehow messed up. I’ve reimaged two cards several times, each with a different OS, including one with Manjaro. But everytime I boot with Manjaro, it continues to give me the root hub init 1 thing like I mention above (I really wish I could post you a screenshot).

I’ve only hooked up the bare necessities to the pi: power, keyboard and an hdmi cable.

I reimaged my card again with Manjaro, but this time I used another SD card adapter, just in case that was causing a problem.

No such luck, though. I booted from the card again, but this time I got a little more detailed message on the boot screen:

I’m hopeful that someone has an idea of what’s going on or what I can do to provide more information.