What has a bigger chance of breaking my system Aur , Flatpacks or snap?

I’ve wrote it on a stick with rufus and it worked wonderfully on my 3200G desktop , the only small freeze it had on my desktop was then I’ve disabled the wifi from the software, but it was fine otherwise, I’ve really loved how quickly it moved

The only thing I don’t know is from where I can install my proprietary software , like I’ve seen the add software Gui and I’ve tried pacman , it’s indeed faster than APT , but I’m asking about the flatpacks vs aur Source

I need Pycharm, Eclipse for C++ , Vs code and Vlc+their codecs along with brave/Vivaldi

Now I’m just wondering, what has the biggest risk of breaking the system (the installation) AUR package or maybe Flatpacks?

In theory flatpak should be sandboxed and contain all necessary dependencies. In practice most users go

From experience, I wouldn’t like to say. With the AUR, there are many different kind of packages which are installed in different ways.

For example, one AUR install might be source code getting built, another might download a Debian file and unpack it, then another might be an RPM, and yet another (one I downloaded last week) pulled down a SNAP package - and got rid of all the extra stuff not required.

None of these have broken my system - though sometimes after an update I need to rebuild, or change the installation of something.

Latte is one example, with people upgrading to Plasma 5.25, latte gets broken - so they either have to put up with that, or install the GIT until the binary gets bugs fixed.

Basically, Flatpak and Snap take the route of packaging copies of everything needed.

Basically, as long as you’re doing snapshots and backups, a broken system is nothing to fear beyond maybe 20 minutes to reinstall/recover/restore (as long as you keep a bootable USB handy) - I have an old 4GB stick and every time a new edition is published, I torrent an ISO and replace the one on the stick).

It doesn’t pay to make assumptions… or hypothesise… so I’m just giving my experience - not being an expert, but having used Manjaro for maybe 5-6 years now.

isn’t it somewhat better to install flatpacks instead of aur packs ?

The way aur packs work seem to be a lot more complicated , and since they have such a big variety and installing methods having them to break(or even worse to break the system) seems a lot more likely

Does it make sense?

Edit, if it didn’t break anything really … I guess I’ll go with AUR

Thanks for your help !

Flatpak is good for isolation and security, but takes up the same space as appimage - and a little slower to launch than native apps.

Snap is slower than Flatpak, and less secure, and owned by Canonical. Bloated (e.g. Inkscape is 180MB, but flatpak and appimages for Inkscape are 90MB.

Deb/Rpm use the least amount of storage, and are faster to open.

AUR has the highest number of packages of any repo. It’s more efficient, rating higher than DEB and RPM for launch times.

First choice should be the community repository - flatpaks often break Qt apps. I think a good choice for proprietary stuff like Spotify.

When installing from AUR, you should look at PKGBUILD/mkpkg to see and decide. An over-arching rule is over-simplifying the issue and misinforming anyone wondering about this issue.

you cannot say that AUR packs things in a more complicated manner than Flatpak or Snap. The end result is actually very simple, and the process of using something like Paru to grab an AUR package is also very simple.

I never experienced any AUR package break anything except for itself. If it does, then it usually gets flagged in the AUR and you will see this when you look it up.

Finally, I’d point out yet again - you should take a snapshot before you install. I have daily snapshots, so I don’t bother doing one when I do an install (via autosnap). If anything goes wrong, it’s just a few minutes to roll it back by restoring a snapshot.

Therein lies your stability, and there is the way to build a more efficient and stable system.

So pay attention to your backups, and come back to the forum if anything we said proves to be wrong

Ok , big thanks for taking the time to explain everything <3

Now it makes sense why aur exists , I’ll definitely use it

But is it okay of I use the GUI to get the software with the AUR repository enabled?

Or do I have to install another gui for aur ?

Add/Remove Software is called under the gnome desktop, idk how’s called in other desktops

Add/Remove is the description. Open your menu and search Pamac - the same result

Sure, GUI is good to show all options (though I would only enable snaps if a search comes up short).

Though my preference is to use pamac, or paru, in the terminal.

Just open your Add/Remove programs and poke about in the menus there, it’s all there. 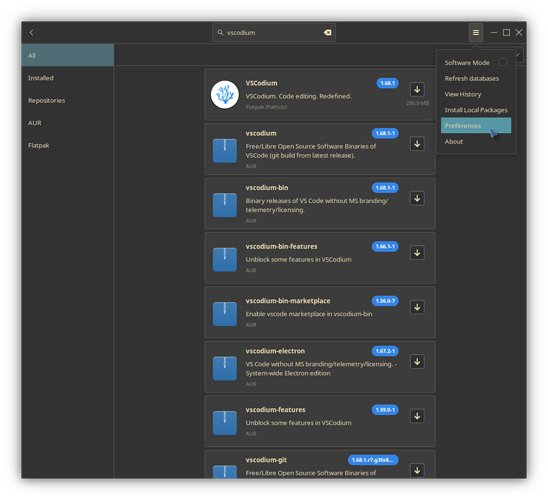 As far as installation goes, none should break your system by default, in the sense that they can’t overwrite a system file, usually already owned by another package, without the package manager warning you of a conflict.
As far as running goes, containerized packages such as Flatpaks and Snaps (theoretically) run in sandboxes, with limited access to your system. AUR packages run like any other packages from the repositories.

That being said, any system-installed package can break a system if poorly made. The difference between repository packages and AUR packages is that the former are made by the (parent) distribution maintainers, while the latter are maintained by the community. In both cases, the structure of the package and the installation process are detailed in their PKGBUILDs, which are publicly available.

What has a bigger chance of breaking my system Aur , Flatpacks or snap?

None of the above if you use the correctly.

@Chris2kn you don’t seem to include the official repository in your comparison. What is wrong with using that?

The official repos do not have all packages, e.g brscan5 but AUR has it.

I’ll have AUR and flatpacks enabled anyway through pamac gui , thanks

I’d actually strike more of a note of caution about the AUR than other people here, especially if you are coming at this as a new/inexperienced user. It’s worth noting that the Manjaro Wiki (Arch User Repository - Manjaro) says this, in bold letters:

Use the AUR at your own risk!
No support will be provided by the Manjaro team for any issues that may arise relating to software installations from the AUR. When Manjaro is updated, AUR packages might stop working. This is not a Manjaro issue

The AUR packages are built against Arch, and Manjaro is a little bit behind Arch in releasing packages. This can mean that dependencies, etc. aren’t quite in synch and problems/conflicts can occur. If you are an expert user, this can usually be sorted out fairly easily but may be more awkward for someone less experienced.

The other thing that I’ve experienced is a package I was using that stopped getting maintained left a load of old python dependencies in my system, and at a later point I had to manually work through to remove them, making sure that doing so would not break anything else, before I could update to the latest version of python which would be required for most things. It wasn’t an impossible task, even for me, but seems to point to the other kind of thing that might happen. Again, childsplay for the expert, but more daunting for a Linux newcomer.

Flatpak doesn’t seem to give you those problems, because its dependencies are ‘sandboxed’ inside the package rather than being a shared system resource. In the past I’ve found Flatpaks can be a bit more temperamental themselves but I’ve not found them to impact on anything else in my system. Flatpaks have got a lot better over the last couple of years, too. Any problems I’ve had are often because of the permissions that are set in them, and there’s a really useful application called Flatseal that helps you view and edit what a particular Flatpak is allowed to do on your system.

As someone who is less than expert, I’d always use the Manjaro offical repositories first. For ‘programmes’ I’d then choose Flatpak over AUR. I’ve not had a good experience with Snaps, so would use these as a last resort!

@Chris2kn you don’t seem to include the official repository in your comparison. What is wrong with using that?

That’s because not all programs are in it even though some would have you believe otherwise.