What audacity version is in the Manjaro repo, with or without spyware

Recently, Audacity has been taken over by a Russian company, and apparently they add some spyware that collects data about users, so I would like to know if the Audacity version in the repo’s contains spyware.
If so, will an older version without spyware be made available.

The Audacity version in the repos is old, so it contains no spyware.

OK, thx, I’ll prevent it from updating then.

You can check here.

Afaik, so far, they only changed their privacy policy.
There shouldn’t be any “spyware” in there (yet).

Although, you might consider this to be “spyware” maybe

Some guy fork Audacity on Github and he is looking for help.
Meanwhile he did a clean up. 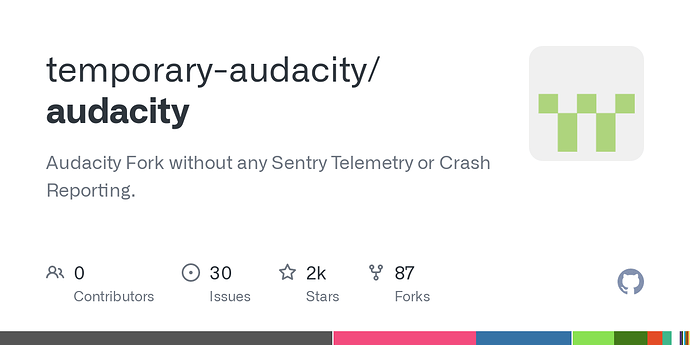 Audacity Fork without any Sentry Telemetry or Crash Reporting.

If you need to check the version of any package in the repos, you just have to type this :

Also I checked the arch repo, the package hasn’t been updated since May 2020

Telemetry(what features of an application are used or not) and crash report is not the same as spyware.

However I am not getting into a discussion about it, each one believes what they think is best.

To fill in those who might not be across events, and to explain why this thread has come up, here’s a quick summary as I understand it:

The introduction of telemetry was announced a couple of weeks ago, and although concerning, isn’t automatically unreasonable on face value. It caused a stir because some (myself included) have concerns regarding the new owners of Audacity, who bought it a few months ago.

The announcement this week is a change to Audacity’s Privacy Policy, the wording of which is very suspicious and seemingly entirely unnecessary for offline FOSS audio software. Thus, it’s not an unreasonable presumption that they intend to on-sell user data in some way. Whether that turns out to be the case or not, people are looking to avoid newer versions of Audacity for this reason. This was the event that really upset people (and imho fairly so) and what led to it being labelled ‘spyware’, much more so than the telemetry.

The initial question has been answered. Discussion can be continued in the #member-hub: