In short, is it easier just to reinstall the OS with the latest ISO?

I used an old installer. After install was done, I tried to update the system with Add/Remove Software. Update failed. So, I used the terminal pacman to install arch-linux-keyring. That succeeded. But system update failed again.

Then I tried to update manjaro-linux-keyring. But this time, it tried to install a few more dependencies for it. It asked overwriting 3 things, with all default Y. But the fourth thing was some sort of gnome conflict and the default was N. If I chose N, it failed. Then I chose Y. It installed something and then showed 500+ packages to update. I proceeded. It downloaded 500+ packages, but when it tried to install, it said the package was corrupt. All of them. So, the installation was failed.

Now, if I tried to update manjaro-linux-keyring, it tries to install those 500+ packages and fails with the same corruption error. I tried clearing pacman cache, but the error was the same.

Reinstall with the latest ISO? In general, do not use old ISO installer?

Yes, in general, if is about to do a fresh install is best to use the latest ISO.
Other than that, this should help:

Before you continue [SOLVED] Error updating system (error: GPGME error: No data) / Newbie Corner / Arch Linux Forums Pacman troubleshooting - Manjaro Pacman looking for database signature files Also see this pacman bugreport from 2015 - which was closed as not a bug but a matter of configuration. FS#44445 : "GPGME error: No data" if no SigLevel DatabaseNever + no *.db.sig files TL:DR Open the file /etc/pacman.conf in a terminl editor (nano, micro, vi) and locate the following section # …

As bogdancovaciu pointed out, yes its best to use up to date media to install. Manjaro is a rolling release distro and updating even a clean install after a month usually results in problems. Its also a very good reason to keep the OS up to date once installed. Since you dont have much invested in the install, just start over with up to date install media.
Just curious, why did you use an old image?

Just curious, why did you use an old image?

That was the USB installer that I had made to install Manjaro on my laptop earlier this year (Gnome 41.5). You know, it takes time to download the 3GB+ iso again and flash that on a USB stick. So, it was a convenient just to use the existing one, instead of repeating the process.

This gives me an idea… How about adding an option to the installer, like Ubuntu below, that automatically retrieves the latest packages from the server, during installation? If it is a fresh install, it should be easy to get and install new packages from the server, right? Maybe there are some people who want to use old Manjaro for some reason (like testing), but I think most users would prefer to install up-to-date Manjaro. 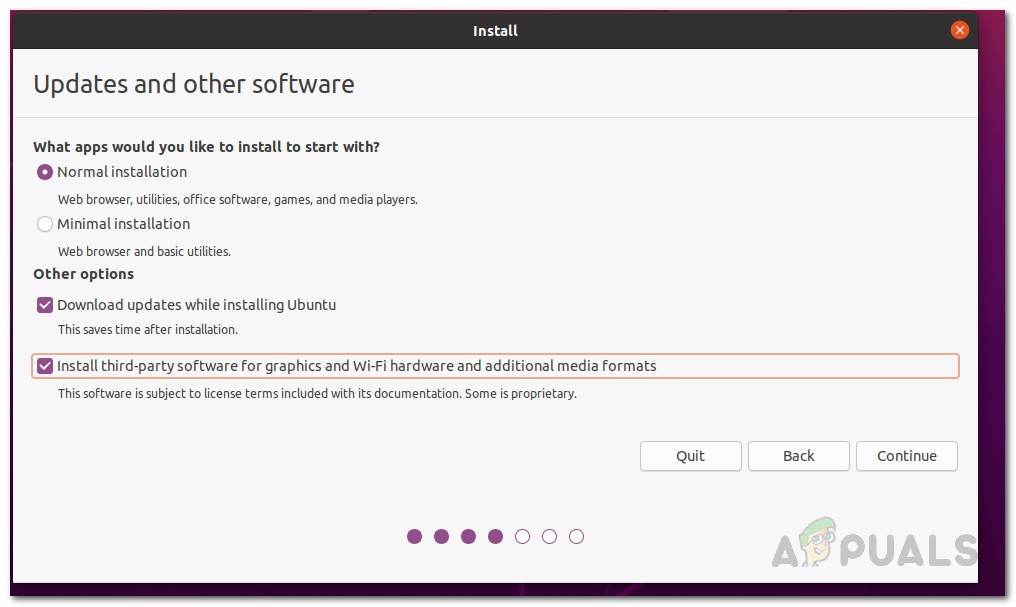 You know, it takes time to download the 3GB+ iso again and flash that on a USB stick

You don’t save time at all, when you install something you can’t update and need to seek help on forums to make it work then. And also such old ISO will have pretty much half to all packages replaced with an update so no you definitely don’t save time using an old ISO. And last point if downloading a proper installation media takes too much time, how are you going to maintain your system when there are updates all the time in Manjaro, this is not uncommon that multiple GB updates are available.

Always use the latest ISO to install.

You don’t save time at all

Yeah, I did not know I would get this kind of update problem for using a few-month-old installer, because I had not had this kind of problem with other OS’es. I mean, even when I used a few-years-old Windows iso to install it, Windows update could update it automatically to the latest version. If I knew, I would have used a new installer.

I’ve been going through the same thing with a month old installer. Manjaro is nowhere near as easy to install as they say. lol I am in two different help forums trying to fix this. One was about the update error, when I got that fixed I went from 500 updates that after all the time loading would say “package is invalid or corrupt” when i ran the sudo command from another thread it fixed the issue then installed the now 927 updates needed. After install I still can not boot into Manjaro with going to bios repair to select use Manjaro. I am debating whether to erase the partition and install a new Manjaro but the guy replied to you that “every time it updates it needs to be wiped and reinstalled” how the hell do I keep personal files then?

every time it updates it needs to be wiped and reinstalled

what are you talking about?

I’ve been going through the same thing with a month old installer.

Manjaro isnt perfect, nothing on this earth is perfect. But you have proven a point in this thread, that has likely been told to you and others. Use up to date install media.
Perhaps if you did, you wouldnt be having issues and posting for help.