I’ve installed the OBS Studio from the Add Software app, but it’s not the complete version, it didn’t have the browser source and other functions like the virtual camera :S

So i’ve contacted the obs dev team and helped me to compile the obs-studio-tytan652 which has everything on it, but to do that, it was a really long and difficult way cause it seems that it’s not updated, or at least that told me Tytah652. 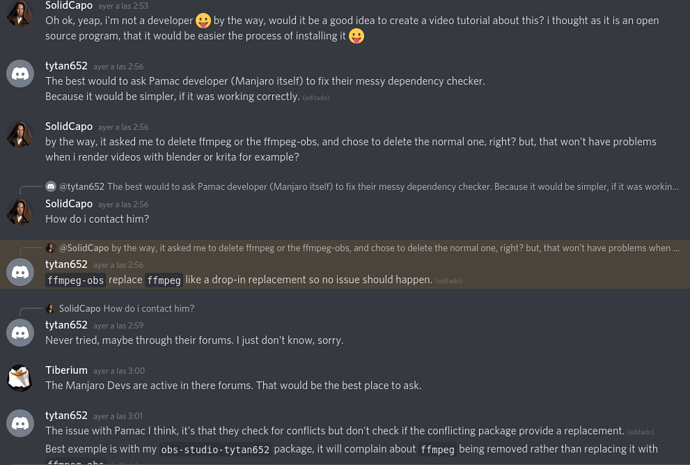 image991×669 155 KB
Here’s the link to the conversation in the OBS discord #Linux Channel:

Discord - A New Way to Chat with Friends & Communities

Discord is the easiest way to communicate over voice, video, and text. Chat, hang out, and stay close with your friends and communities.

We import obs-studio directly from Arch. There’s been talk about including the browser, but it was decided they will not implement it. We will not either. See:

The pinned comment for obs-studio-browser suggests using a binary version of CEF rather than attempt to build / rebuild it all the time.

EDIT: It seems obs-studio-tytan652 uses a different version of CEF.

The comment thread displayed - the phrase on their messy dependency checker show how little knowledge the tytan652 has on the subject of AUR buildscripts.

Just looked over the comment thread on the Arch bugtracker and the conclusion is solid. It would be a pin to maintain.

The last comment indicates that obx-studio-tytan652 is the only version with the recommended combination of source and browser source.

From the general perspective it seems - due to the arch split package philosophy ( the one version policy ) seems to be difficult to uphold with relation to OBS - it seems to be a choice between several evils to maintain OBS on Arch based system.

Manjaro actively involving itself into an endless trail of errors seems to be a no-go even given the popularity of the application - it would be a repetiion of the story of the brave browser with constant breakage and frustruation until the point where it is abandoned as unmaintainable.

Thanks for the answer Yochanan!

), and I don’t know about programming, but it seems that now it’s possible no? what can we do cause those functions (browser source and virtual camera) are essentials for OBS :S Still don’t understand why they would make a version different to what’s available for everyone and other OS

I really don’t understand about programming, but tell me, that problem is only on Arch distributions or in Linux in general? :S can something be done about that software? i’m impressed cause it’s also open source but works better in Windows? :S (sorry, just migrated from windows a week ago, i’m new but a good user of open source software and want it to grow so we all have better things)