Most likely the OP issue was not being in the vboxusers group and also trying to install the vbox-extpack failed because was not able to install it as there was no password prompt when doing it. All that was fixed once he did what i recommended.

My “issue” here, and confusion is that the wiki has, as i said

the update announcement has virtualbox as group, while my command and arch wiki command has vboxusers as group

The wikipost needs editing because
the group name should be ‘vboxusers’ not ‘virtualbox’.

The wiki in the update announcement has virtualbox as group, while my command and arch wiki command has vboxusers as group …

(My information came from another user in the original update announcement)

That was caused by having both ‘virtualbox-host-dkms’ and ‘virtualbox-host-modules’ installed at the same time.
The manjaro wiki does not mention dkms.
The arch wiki mentions both, and says you must choose one or the other.

(How it happened that you were not in the vboxusers group I have no idea – it’s a different issue.)

I figured that not having dkms will save me the unload/reload time that happens on every kernel update, so I switched.

I used the following commands.
They might help if you decide to uninstall virtualbox-host-dkms.

None of the above affects your VMs (as long as they’re not running at the time).
I’ve used my Win10 VM since I made those changes, and installed the new Guest Additions.

I would discourage using aur/virtualbox-ext-oracle on stable.
The version of the extension pack should always match the version of VirtualBox, the AUR package assumes you have the same version that Arch has.

I’ll try in a moment…

I wonder about “to use the new version, reload all virtualbox modules manually”,
as he didn’t mention doing it, but he says virtualbox works…

Maybe the reboot (recommended by @bogdancovaciu) did the trick.

Using octopi will remove dkms too 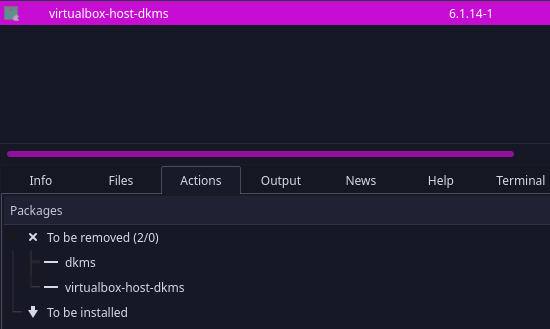 True. I mentioned this yesterday at [HowTo] VirtualBox - Installation - USB - Shared Folder, and it’s now covered in the main post there.

Have just noticed “virtualbox-ext-oracle-manjaro” on that page.
Have edited it into my earlier post.

Also learned how to search with pikaur :

Pamac is a GUI for pacman, and is an AUR helper.
At the moment I think: use the pacman commands from my message,
as there’s less that could go wrong, and you’ll get clear feedback.
(post text here off your terminal if it didn’t go right.)
Pamac might do it OK, but I never use it myself, so I can’t be sure.

Where I wrote “use whatever AUR helper you normally use”, you can use pamac for that part (installing virtualbox-ext-oracle-manjaro from the AUR).

Good find. I hope it gets reflected in the wiki.

but it seems to be resolved, and I don’t see how.

At home I have a system installed before 2015, at work one installed in January 2018.

In both I had problems to start virtualbox, although at home I did everything I could find to correct it (no very wise), in the end the solution was what @bogdancovaciu suggested above:

This worked for me today at work, here I didn’t need to reboot for it to work.

SInce Manjaro provides the modules for all kernels, there is no need for dkms one … but, each can do what they prefer and works best.

I barely remember that I found this dkms suggestion a long time ago when I installed virtualbox at home. In this new installation at work I don’t even have it.

As I’m not running virtualbox, I need some guidance as what needs to be changed in the wiki.

At section Install the Extension Pack(Optional):
Currently installation of extension pack is advised as:
pamac build virtualbox-ext-oracle
This is fine as long as you have the same version of VirtualBox as Arch has, but stable can lag behind in that, which may lead to similar errors as the one described in this thread until stable catches up.

For TL3s and up: This is a wiki post; please edit as necessary.

I added that in that after 1 (one) TL2 user said he couldn’t. I just wanted confirmation…

It should be fine.

A bit of nitpick, but aur/virtualbox-bin-guest-iso is linked above it, which is a different package, an installer ISO for guest utils. Even then is there a reason it is advised above community/virtualbox-guest-iso?

A bit of nitpick,

We need to clarify a few points.

You are not alone with the current VirtualBox issues. I use virtualbox daily - as I use Visual Studio on Windows 10 for contract work.

I have had several issues lately with the combo Nvidia, VirtualBox, extension pack and kernel modules - even on pure Arch.

I was on the brink of insanity - until I got it working - running Arch with zen kernel and no Nvidia card.

Because this is a manual action - the installer cannot know which users to add to vboxusers group.

to @j77h for the improvements to the VirtualBox topic with relation to the extension pack.