I have read a manjaro wiki of how to use DRI_PRIME=0, or 1 for using a specific card on the go, but I want a drop down menu of selecting intel, nvidia and hybrid mode on the go withou having to reboot?
I am a newbie here, but my laptop’s battery suffers as it is showing intel graphics in systems menu but nvidia card is also running.

Also the reason you get the error is because you can’t install 2 nvidia drivers at once.
You would have to uninstall video-hybrid-intel-nvidia-prime first. but since you wanna be able to select the one you use, keep the current driver.

I have seen that pop os gives a functionality to start an application when clicked on the right button of the mouse, the option to launch with dedicated graphics card,

So, I looked on the manjaro wiki and found that I can launch an app from terminal that uses my dedicated graphics card using prime-run , but my knowledge to start app from terminal is low, as I am learning now.

So, can you please suggest how to enable the feature in the right click button menu. My last resort will be to use the optimus manager and log out then in to use my nvidia card, but if it would be great if this feature is implemented
]

Oh i know what you mean. I remember that from when i used Pop_os.
I found this extention for the Gnome desktop environment. GNOME Run With PRIME - GNOME Shell Extensions
It does exactly what you want

I hope that works!

But I am using Manjaro KDE not gnome, how can I work it out? Please let me know

Hmmm… i can’t find anything to automate it like with Gnome. But one thing you COULD do is for example you have a game that you have installed. Go to the KDE Plasma launcher, or menu, or whatever its called on KDE, and go to KDE Menu editor.

From there you can select an application like a game you have installed, then where it says “Command”, write prime-run infront of it. So for example if the command is currently kate, change it to prime-run kate.
Or if you have a game like world of warcraft for example and the command is wine Wow.exe, change it to prime-run wine Wow.exe.
Then save what you changed, and then everytime you launch the application/game it will launch using the nvidia graphics card when starting it through the KDE app launcher. 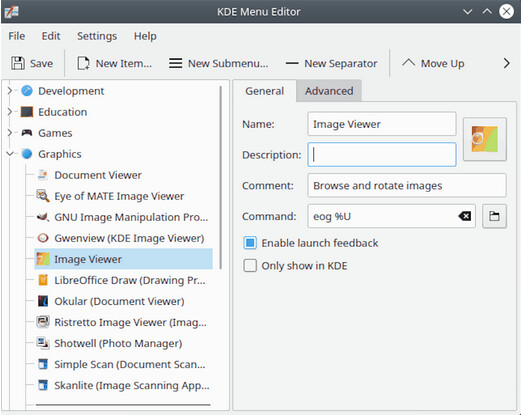 Sorry i can’t find an easier option for KDE

Thank you, I got that from the manjaro wiki . I have used in steam games by writing “prime-run %command%” in the launch script. I have asked on support, for this. I tried your method . I have to go root and use edit the .desktop file’s Exec line like say I want my app i.e steam to use my dgpu, so I will cd to /usr/share/applications then edit steam.desktop file’s Exec line and append prime-run in the beginning.

No, copy the desktop file to ~/.local/share/applications/steam.desktop and modify it there.

For the right click menu it should be easy to make, I’ll edit this message if I come up with something.

maybe this can work, create a file ~/.local/share/kservices5/ServiceMenus/runwithprime.desktop

Try at your own risk but if you start Dolphin after creating this, you should have a new right click item. If it doesn’t work properly then maybe you can start from there and fix it for your needs.

It should override them, try reboot.

Then recreate the shortcut on the desktop from the Application Menu?