Some comments, I’ll be mostly listing negatives to save time even though this looks awesome:

This looks very promising, but you might want to consider what is your target audience? Is this aimed at minimalists? You can get meeaningfully more minimal if you want. Or should this be accessible to newcomers? If yes, you might want to develop the mouse support further and maybe add a gui filemanager. And maybe add micro in addition to or in place of neovim.

The fzf-based app launcher leaves unnecessary terminal windows behind when launching some apps like pamac-manager.

I think the reason is, that there is no desktop entry for pamac. /usr/share/applications/org.manjaro.pamac.manager.desktop only contains:

not really. you’re not the first to favor wofi, so probably I need to take a look

I think it is only one and yes, depending on the vm it seems distracting. will tone flashfocus down a notch.

Lack mouse based option to close windows. Have you considered adding some option?

Did you have some kind of volume mounting solution selected?

I didn’t think of that. Will have a look.

I think it is already marked as “extra”, but I’m just only building the full image atm.

Is this aimed at minimalists?

I mean: it foremost is aimed at myself

so what you see here mainly is how I use my OS.

I think neovim I added just because either the arm or Simons branch already had it and I thought: “neat”. I didn’t know that before and I don’t know micro. I used those text editors only for commit messages/tinkering with configs, so I never really cared. So I’m depending on external opinions there…

I don’t use Firefox that way, so can’t definitively recommend, but this had good reviews: 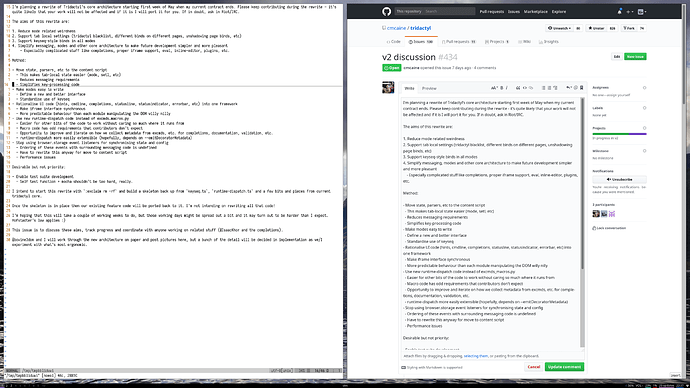 Lataa Tridactyl Firefoxille. Vim, but in your browser. Replace Firefox's control mechanism with one modelled on Vim. This addon is very usable, but is in an early stage of development. We intend to implement the majority of Vimperator's features.

In bspwm I added a global close button to the top panel, and added a desktop menu that contained an item for closing windows. Something akin to a shortcut for xkill in top panel could work too. Or three finger downward swipe? Those kinds of things. I3/sway has built-in actions with it’s titlebars, but you aren’t using those so that’s not available.

Excellent reasoning, you also get ootb theming that way!

gammastep as a redshift ‘replacement’ for wayland. If you’ve never used night light at all, I would really recommend trying it out and to research negative affects of blue light on sleep…

EDIT: Note for the privacy-concerned: These apps will pull in geoclue, which then can be configured to not fetch one’s location.

Just installed. Latched me straight onto my network without me needing to config anything, which is cool. No problems to report thus far. I’ll carry on customizing and adding apps etc and see what transpires.
It even comes with those see-thru window jobbies outta the box. Nice.

Some alignment has taken place between the look’n’feel of both Sway editions; also the Sway ARM edition has been improved by work done here; so I’m really quite happy to see both evolve and learn from each other.

On the Sway ARM edition we sometimes have a different selection of default tools - e.g. we went with the Wofi launcher from the beginning. Also the default themes (matcha-green, matcha-blue) are a bit more aligned to the look’n’feel of the other Manjaro (ARM) editions (with having me figure out color values from screenshots back in the days). This is not a big obstacle and might be also aligned between both editions after some discussion…

One thing that is quite different is the packaging (and distribution) of the manjaro-sway-settings. In the ARM edition we decided a couple of months ago to not have a dedicated package for the default settings, which has the challenge that updates to the default theme doesn’t reach users automatically. But on the other hand we also solved the issues with overwriting customization a user might have done on it… so both approaches have their pros and cons and I would like have a common understanding here, which might also easy converging the Sway editions moving forward…

In theory, any settings package, should not change anything in an existing users /home.

I have always preferred using overlays, because it’s easier to test and quicker to get into production when creating images and new installs, than a settings package is.
A settings package first needs to be packaged, then uploaded to the repo and then tested with a new image created. Also, some settings packages might contain changes to certain files that another package actually own, making it conflict. The overlay, just overwrites that file.

A settings package first needs to be packaged, then uploaded to the repo and then tested with a new image created.

The idea of the settings package is that you can test the new settings without building an image by just creating a new, temporary user account. But yes, in practice, overlay is quicker and doesn’t require occasional pushing packages straight to stable branch.

Also, some settings packages might contain changes to certain files that another package actually own, making it conflict. The overlay, just overwrites that file.

If they do, that is just a mismanaged package. In x86, the policy is to use the overlay for the files owned by other packages, and settings package for the rest. All files outside /home should be owned by some package.

This might be a limitation of the terminal emulator used. In ARM edition we use termite as it is less on system requirements, but may also lack some of the advanced feats. When using a more modern terminal emulator such as alacritty or kitty image preview should work out-of-the-box…

There I’m also a bit on/off with the choice in the ARM edition. The most lightweight solution would be pcmanfm, but this offers not much additional features and also seems to have some issues with opening files in default applications (e.g. pdf) in my installation. So I went with the thunar application, which is a bit more advanced. Nemo / Nautilus have a bunch of additional (cinnamon/gnome) dependencies they need to get working… not sure if that still fits the idea of such a lightweight desktop edition…

Any suggestions for default apps are welcomed though. I usually tried to provide a CLI and UI variant for the most important utilities on a desktop.

There is also spacefm, but I’m not sure if that would be a good fit, and it does not offer mounting options for phones and so on.

Thunar would probably be the best fit, even though it pulls some xfce dependencies. It has stable phone mounting experience and best in class bulk rename functionality.

This is the tiniest niggling thing, but might be worth considering as a default.
What’s the information you are most likely to want to see the most often? At least for me, it’s the clock and my eyes (well in my opinion) should be guided to it. So…I simply added in the style sheet, background-color: darkblue;
Again, almost anyone that dares to run a tiling based environment should be able to do that, but if you feel my theorem is correct, why should everyone have to do it?

Let me reiterate…I am so happy someone is finally making a spin/distro with sway!

I also find this very useful: 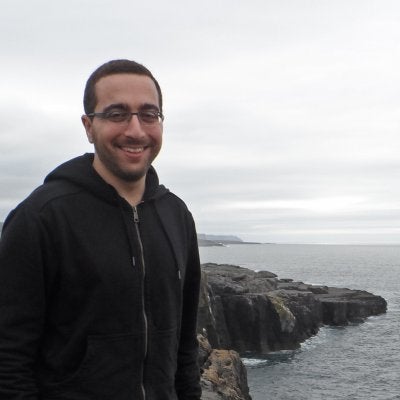 I would like to know what is the difference between regular and minimal versions of Manjaro-Sway?

About using Wofi… Rofi now supports Wayland (there is a separate release)… I’m using Rofi with sway with Wayland for 4 months now. Almost everything except for window switching is supported…

I’m using wl-color-picker from the aur for theming purposes. 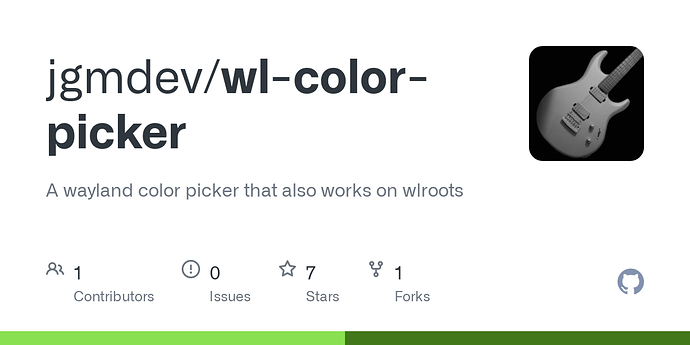 A wayland color picker that also works on wlroots. Contribute to jgmdev/wl-color-picker development by creating an account on GitHub.

The code looks clean afaict. It’s simple and definitely worth checking out.

EDIT: I’ve recently installed azote and learned that it comes with an integrated color picker that I’m using now instead of wl-color-picker…

Congratulations on the project! I’m searching for a Regolith equivalent in Sway for a while, and think this is the one!

One thing that makes hard for me to keep up with project by reading your last commits, is that you configured a bot to commit dozens of times a day, making the project Git history a mess: 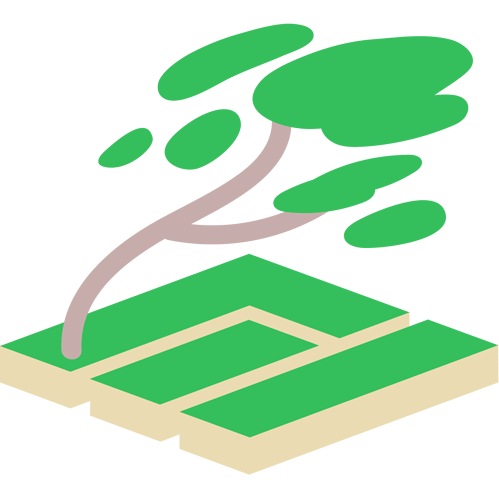 Would you consider a different approach here for download numbers?

The git history of that repo does not contain anything useful anyway, that’s not where the configuration resides. It’s only purpose is to do nightly builds of the iso.

Where can we keep track of changes? Maybe a changelog topic here?

I installed it as my daily driver and found a first issue. Would be glad to help

Sent a simple PR to add “Area screenshot” support that I use all the time at work.

Is this the correct workflow to contribute?

Where can we keep track of changes?

Where can we keep track of changes?

I don’t see the sway community edition in that link. Is it in a special branch?