I tried the following in terminal:

but it does not survive a reboot?

How can I fix the above?
Let me know, thanks!

Hi. You just need to put your desired parameters inside a *.conf file @ /etc/sysctl.d/

That low of a value for cache_pressure doesn’t makes much sense if you ask me BTW, but I’m no expert myself

In the meantime you can also take a look to such discussion:

Clarification about the behaviour of swappiness Support

[Updates on bottom of this message, to check them go to the NEWS section] I’m gathering these settings from here: https://www.kernel.org/doc/Documentation/sysctl/vm.txt I open a new discussion, for avoiding to go offtopic in this one: I was saying: And I’ve done a test, to see how the system would act without swap: I disabled zram swap, then: I opened 10 MPV instances, each of them playing 1280x720 video files I copied from an external USB 3.0 disk, a 15 GB file to an USB 2.0 stic…

Important: I don’t encourage you to do the same, to apply same settings.

I tried post #2, but it’s not working after a reboot?: 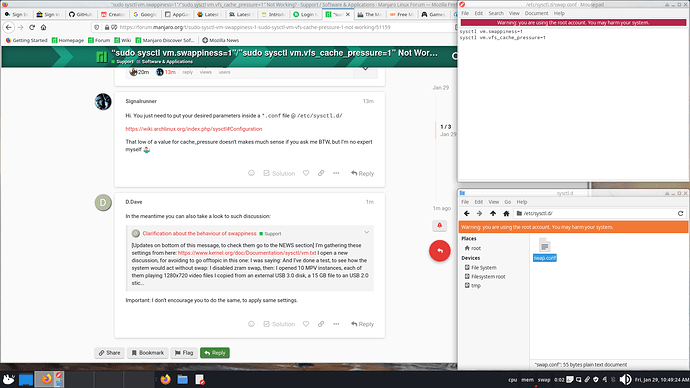 Ok, removing the “sysctl” made it work, thanks!

I know this will work for changing value for swappiness
But I have not combined it with setting for ‘vm.vfs_cache_pressure’ before

As @Signalrunner already mentioned, using 1 for these values will not help you.

cc @nikgnomic as I see you’re making the same mistake.

Swapping is normal: the kernel knows better than you when to swap stuff out. Don’t focus on not having any swap at all!

You will always see some swapping going on, because the kernel knows better than you and will swap unused services out; so you’re better off debugging what’s not needed by looking at what gets swapped out exactly and deleting / disabling that instead of trying to having no swapping happen at all!
E.G. If you’ve installed samba but only wanted the client and not the server, well, guess what? The server will be swapped out because it’s not being used.

So, please use these (pretty self-explanatory) values to swap late, but once swapped out, don’t swap in again aggressively as that slows down things as well:

Also know that hibernation works by swapping all programs out to disk and then shutting down, so when you come out of hibernation, any swapped-out applications not taking any CPU cycles will stay swapped until you use them! This is by design!
(I.E. Don’t debug swapping when coming out of hibernation: the figures always look awful!)

How to debug what is getting swapped, you ask?

E.G. On my system; right now; coming out of hibernate yesterday:

I was only answering the question of setting the values permanently using the values OP wanted
I don’t expect OP will be happy with the values requested, but it will help towards finding the optimal setting one way or another

I have posted before about swappiness value but users still try things that may not be good, I did the same myself when I was trying to find the right balance on settings

I have 8GB RAM and found vm.swappiness = 10 to be optimal for my use
I tried lower values 10 but found it delayed swap too much and system could stall hard for a moment. I found swapping too late to be just as annoying as swapping too early

2 posts were split to a new topic: Issues with vfs_cache_pressure

Ok, removing the “sysctl” made it work, thanks!

Folks, I’m just marking this as solved. it looks like the underlying issue on this thread was solved long time ago. Probably the OP forgot to mark this thread as solved.

I don’t think there is a need to revive this discussion.