I searched through all forum posts and wiki pages, but still couldn’t make it work.
Today my Manjaro (on dual boot) booted strangely (without the usual countdown on the bottom), I pressed enter, logged in and rebooted to check the countdown again, but this time my GRUB menu didn’t show up at all!

I checked the /etc/default/grub and didn’t see anything unusual, checked all forum posts and this one looked promising, but didn’t help:

The os-prober detects accurately all the OS on board, sudo update-grub executes correctly and I can forcefully show the grub menu by spamming SHIFT+ESC keys during the boot sequence. I feel like I’m missing something very obvious here. How could I bring the grub menu back as it normally worked?

I believe you were the victim of…Windows.

I expect you’ll have to ensure the boot priority in the BIOS/UEFI is correct and reinstall GRUB as per the instructions in the above mentioned Wiki article.

I believe you were the victim of…Windows.

Hm… I didn’t boot into Windows for months, therefore I’m not sure how could Windows change anything when it was not even loaded. Thanks, I’ll look into your link anyway.

Hm… I didn’t boot into Windows for months, therefore I’m not sure how could Windows change anything when it was not even loaded.

In that case, quite possibly not. Not that I know of anyway.

However, I still think you’ll need to reinstall GRUB, so that link is still valid.

Do you have more than one monitor plugged in?

Do you have more than one monitor plugged in?

try changing the timeout from 2 seconds to 5:
GRUB_TIMEOUT=5
save grub, update grub, reboot

OMG! Now it works, thanks!

But how come it worked for years with the previous setting, why I had to change it to 5s now, I don’t get it?

it can have something to do with the latest update?

I would have to agree it has to be this.

How about that? This bug is weird. 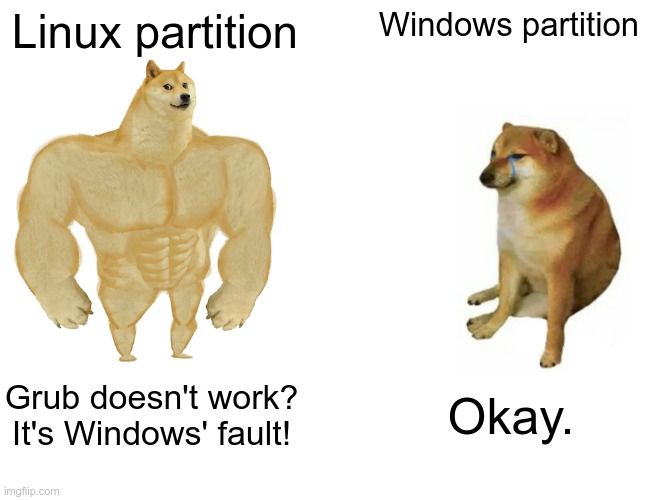 (Sorry for the meme, it was stronger than me.)