I found this in the pinephone forums, but it comes as a .deb file. I was unable to understand the build directions, and when I tried to install dockerd/snapd and attemp to install it, it did not work. So i did the big big big no no… I downloaded and executed this:

As Signal is a security application, I would rather use the original source to build it from, than use some random github repo deb build.

But I have been unsuccessful in building Signal, I believe some dependencies are missing from the repository for it.

fair enough - i’d rather build myself too, but was not able, and don’t even understand the errors i’m getting or have much of a clue where to start. I also was attempting the build on my pinephone, as i don’t know how to build on my manjaro x86 machine either, which i imagine would take forever, if AOSP/Lineage is anything to gauge it by.

A number of other people tried this mobian build with success, so i decided to take a chance. It does work well so far though, and maybe without signing in or whathave you it would be useful to you or someone on the ARM team for learning how to build it successfully?

If we use the .deb, then we don’t build it, we just repackage it.

I uninstalled what I did above and added the privacyshark repo. I also am not being able to successfully build on my pinephone. I keep getting dependency errors as well. This ohfp account on gitlab seems to have successful builds for the pinebook and pinephone. It’s not ideal still, as i guess it’s still technically “random person’s build”, however, lots of folks on the pine64 forums seem to trust and be okay with this source, and im going to use it until manjaro team can build it i guess.

Don’t get me wrong… I don’t understand why whisper systems wont just help the opensource community build or give us some direction to building signal at all… Support Linux with armv7hf/arm64 processors · Issue #3410 · signalapp/Signal-Desktop · GitHub has lots of folks attempting to build for arm64 without any help, and very limited success a long while back.

ive added this person’s (contact info for them is ohfp · GitLab) https://privacyshark.zero-credibility.net/ repo to install signal-desktop instead of repackaging for the time being, as it works with pacman at least. it doesn’t include an app icon though, so i have to start it from the terminal. 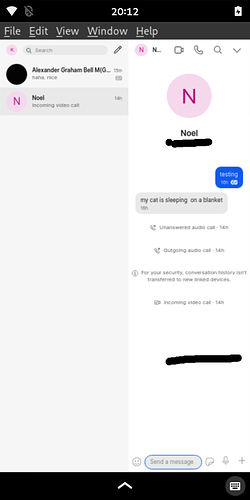 test edited720×1440 97.3 KB
here’s a picture after we tested phone calls, chat and video call. During the video call my friend sounded very quiet on my end, but otherwise functions mostly ok. theres some scaling issues, i worked around by ctrl+ - (zoom out).
Strit September 19, 2021, 8:17am #7

Yeah, it’s not meant for Mobile. It’s a desktop application with no adaptive support.

I’d also be super interested in seeing Signal making its way to the arm packages.
Regarding the build, would the shell scripts from the Mobian build or these two help?

Also regarding adaptive support, I would say this mostly requires collapsible contact bar and this is supposedly a long awaited update that is supposed to come some day (it has been assigned by some Signal dev).

ohfp's PKGBUILD builds fine, but the app crashes after installation with a core dump 🤷

Also, this is slightly off-topic but it may interest people:
somebody has started a rust-based version using the library developed by the signal devs to make a 3rd party client that also works as a standalone application.
In case someone is looking for a client on mobile ARM for instance… Not everything works yet but it looks promising.

There’s this, which is the PrivacyShark PKGBUILD.

EDIT: @nobodyinperson beat me to it.