My update on my Intel Nuc 10i7FNH was not so well. After reboot my Gnome terminal was not working anymore and the local language was gone, so I had partly english and partly dutch and all looked strange. Wine-staging didnt run also because of that. So in Manjaro settings I could add the dutch language (no language was visible there at all) and after installing that and a few reboots somehow all the language translation is Dutch again thank God. Terminal works now and Wine also. So strange things happen in updates… BTW, I first tried using the XFCE terminal to at least do something, but that didnt fix the problem. I really had to install completely a new language in the Manjaro settings before everything worked.

I have screen tearing on the desktop since the update… (nvidia driver 460, kernel 5.4, KDE) Any idea?

Even with the last update of Pulseaudio the problem of Pulseaudio still persists, forcing me to use Pavucontrol to select the sound output every time I turn on the PC

Yes, I too experienced the same. Changing the compositor to OpenGL 2.0 solved the problem for me. (Scale method: Accurate, Tearing Prevention “vsync”: Automatic)

After updating I noticed that while my Laptop is connected to the network, it can’t connect to the internet. while my phone is still able to use it. I don’t know what to do, so I wish someone here would guide me on how to solve it

EDIT: navigating the forum with phone wasn’t easy. After properly reading through the thread I find @mbb’s solution to downgrade the networkmanager package. it worked.

Why is Kernel 5.10 still shown with no Infos in Manjaro Settings Manager?
Is this Kernel still experimental or recommended or something between? 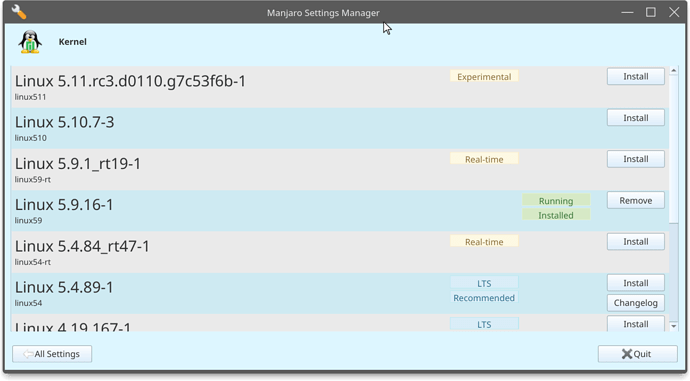 Btw. no issues after the last update… goodjob, i love Manjaro (I use Linux since 4 Month now after 27 Years Windows and you guys can count on a regular Donation

Why is Kernel 5.10 still shown with no Infos in Manjaro Settings Manager?
Is this Kernel still experimental or recommended or something between?

https://www.kernel.org/
As long as it’s not officially named LTS, it’s a normal kernel for now.
It will whange when next kernel 5.11 will go out.

You can update NM and then enable systemd-resolved service.

Update went smoothly on KDE with 5.4 kernel.
My graphics hardware are :

I used to use these drivers :

After this update I have :

Graphics hardware are a mystery to me, can someone explain me like I am 5 what are the changes for me ?
What should I expect ? Performance loss ? Battery time decrease ? Glitches ?
What should I monitor to see if everything goes fine in the next days ?

I get an error when I try to update because of the removal of sip.

Would it be okay to skip the sip changes?

No, don’t skip them.

I did a reverse dependency search and python-pyqt4 is not used by anything, so I removed it. Now the update is running okay.

Continuing issue with whole-disk passthrough in libvirt, as I’ve documented in the Virtualization section (sorry, I’m not yet allowed to post links, but a search for devmapper will turn it up).

SOLVED
Instead of sudo pacman -Syu I ran the upgrade via the update notifier in the taskbar. It handled it perfectly. Linux command terminal is soo 90ies

I tried to run the updated, but it failed. This was the error I got :

This is some info about my system :

Not sure what you mean by no infos? 5.10 is version 5.10.7-3. It is the latest STABLE release. If you are referring to it being marked LTS that is not going to arbitrarily happen. What defines it as a LTS kernel are the developers at kernel.org. They are the ones who maintain the kernels and THEY are the ones who will mark it as LTS when it is appropriate to do so. This will occur most likely when 5.11 gets released as a regular STABLE kernel and 5.10 then becomes the latest LTS kernel, at that time 5.12 will become the new experimental kernel. The manjaro team doesn’t have control over when the kernel developers mark a kernel as LTS. Even though we all know that 5.10 will become the next LTS kernel at this time it is NOT a LTS kernel and that is why it is not marked as such yet. Head over to kernel.org if you ever have any questions about the current state of a kernel as they are the source of that information.

Make a backup first, in case you’re going to follow this smattering advice…

I get this error on boot:
[FAILED] Failed to start Wait for Network to be Configured
See ‘systemctl status systemd-networkd-wait-online.service’ for details.

Now I have ‘[Ok] Finished TLP system startup/shutdown.’ and a blinking underscore on my screen.
I can login on tty2.

I installed sip 6 instead of sip4.
Wrong idea?

Thank you for your answer! Sadly, that doesn’t seem to work for me.

It works. thank you so much.