My computer turned off for no reason yesterday and now the sound does not work at all. The default sound card on alsamixer has become “Loopback” and the only other option is Intel. Switching to Intel card doesn’t restore the sound either, I believe this is for the HDMI port. I am pretty sure I have a realtek card on my laptop but it does not show up in alsamixer.
This is my output after running alsa-info.sh 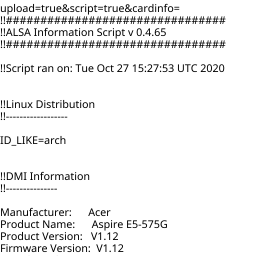 Nextcloud - a safe home for all your data

I have acer Aspire E5-771G and in my alsa-info.txt first difference is in “Sound Servers on this system” secction, i have this:

suggest you go to ALSA controls

then exit alsamixer and save ALSA settings

If you want to remove the ALSA Loopback connections use this

Thank you for reply. The issue like you pointed out was that loopback became card 0 and all my applications were trying to use the default card. I tried to set the intel card as 0 and the loopback card as 1 as mentioned in this archwiki article.
https://wiki.archlinux.org/index.php/Advanced_Linux_Sound_Architecture#Setting_the_default_sound_card_via_defaults_node
That fixed it.