I often have multiple tabs open in firefox for several youtube videos, usually a song in one and a tutorial or some other content in another. If I open pavucontrol, each of these browser tabs has its own individual sound level represented in the UI as a playback stream. For this post I tested with three videos: one from Linus Tech Tips, one from The Linux Experiment, and a song from Melodicka Bros.

I had all levels set to 100% and they stayed there when paused: 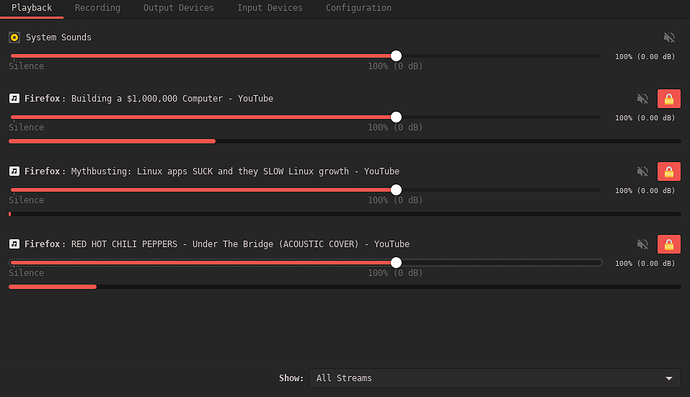 Then I resumed the song tab and it dropped to 93%: 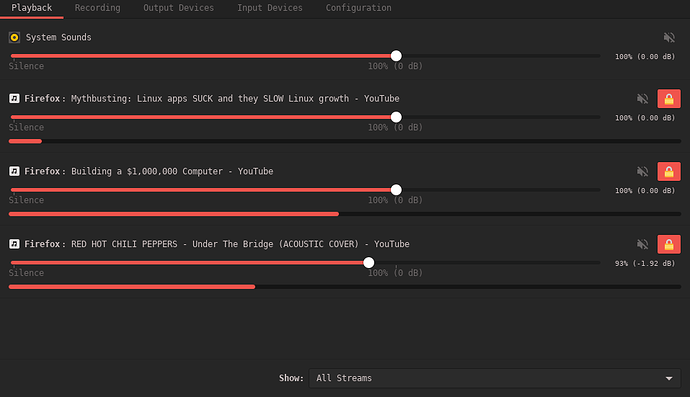 After these tests, I clicked around to other videos, started different songs, paused and changed tabs then came back and resumed, and the sound levels would only change occasionally for various tabs, and the levels would be a seemingly random value somewhere between 60-99%. I have not been able to identify any specific trend or pattern with which tabs have the levels change

I’m using pipewire, with wireplumber installed, but this behavior occurred with pulseaudio as well.

Has anyone seen this before, and know how to prevent these levels from shifting around all the time?

EDIT: Just experienced this with a single video playing, while it was playing the window lost focus, and the volume dropped from 100% to 83% on its own.

There has been a few topic on this before - try searching - I think a couple of months - if I recall correct there was a solution.

I’ve tried searching the forums over the course of a few weeks before posting here. The closest thing I ever found was Zoom changing its levels, but that was an issue within the Zoom application itself and unrelated to the issue I’m having.

If you know of other threads that are directly related to this, please point me to them.

Not sure if it’s related, but I had microphone levels dropping down on Zoom. It was irritating. I moved it to 100% and it went to 0% fluently within next few seconds. I moved it up to 100% and again went to 0%. Tried it many, many times and suddenly it stopped going down. Weird.
Since that time, I didn’t notice this issue, but didn’t also have many zoom calls, so maybe I didn’t test it enough.

However, in meanwhile I moved to Pipewire and I’m thrilled, because many long lasting sound issues went away (vlc finally have good sound, no cracking sound in bluetooth), so maybe this also fixed this issue.

This is unrelated. My mic levels are always consistent, and I don’t use zoom on my system either. Also I mentioned originally that this is happening with both pulseaudio and pipewire.

Thanks for the input though.

Is the problem only with audio playing from one website? or are there issues playing audio from other websites; browsers; or local audio content?

If this is only an issue in Firefox, change Firefox settings in about:config to turn off settings for Automatic Gain Control:

Previous posts about audio levels in Firefox were more about microphone level changing rather than level for audio playback. But the latest version of Firefox now has 3 settings for AGC and AEC, so I suspect audio playback might also be affected by this processing
Firefox Website Adjusts Mic Gain?

So far I’ve only seen this behavior in firefox. Unfortunately disabling all the above in firefox did not change anything with the behavior.