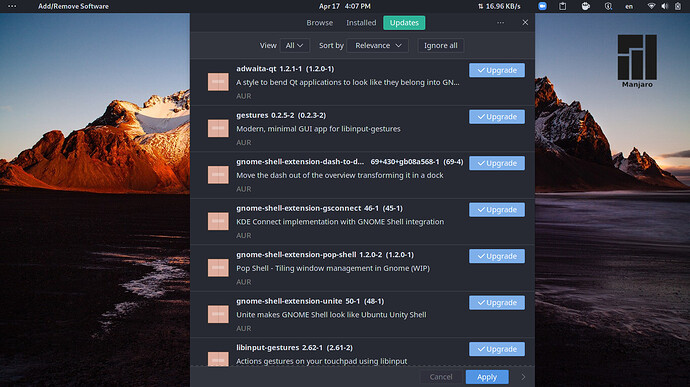 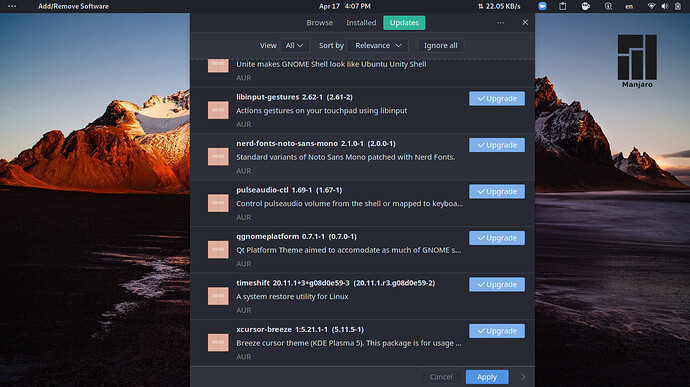 Suddenly I got this update where some extensions, themes and app like Timeshift is being shown on AUR instead of the repository.

This may be a problem in Pamac because I clearly remember installing Timeshift from the Application feature in Manjaro Hello.

Some packages will show up as being in both AUR and Manjaro repo.

This is because the AUR package has been deemed so useful it has been included in Manjaro repo.

If such package as timeshift get’s enough votes to get into the official Arch repo then it will most like be removed from the Manjaro overlay to Arch repo.

You may also see a version mismatch between AUR and Manjaro because packages are rebuilt against unstable and enter in unstable - thus they will take the tour-de-branches before arriving in stable.

A post was split to a new topic: Error with pacman database

My problem is that if I didn’t install a package from AUR previously it wouldn’t be seen in Pamac update check.

Only the packages which I would specifically install from AUR would be seen in the Pamac update check.

For example I use Chrome from AUR. And when an update comes this can be seen in pamac update check.

But I have never seen pop-shell extension from AUR in the update-check. It would always be updated from the repos and not AUR.

Apparently the community.deb file provided by my mirror was corrupted.

I removed the pacman sync. And ran sudo pacman-mirrors --fasttrack
But still AUR packages were overlapping the repo packages.

Then I installed paru. And restarted my device. This solved the overlapping problem.