llvmpipe is broken, both in the iso currently available for download and in the installed and updated system.

So just move the windows a little in KDE and Kwin breaks, in virtualbox that is using llvmpipe by default the problem is easier to detect.

Can’t say i can reproduce with the latest ISO, the install, even switch to the unstable branch and then update it to latest plasma 5.25.1 … but llvmpipe was working all the way, no issue whatsoever. The VM install: 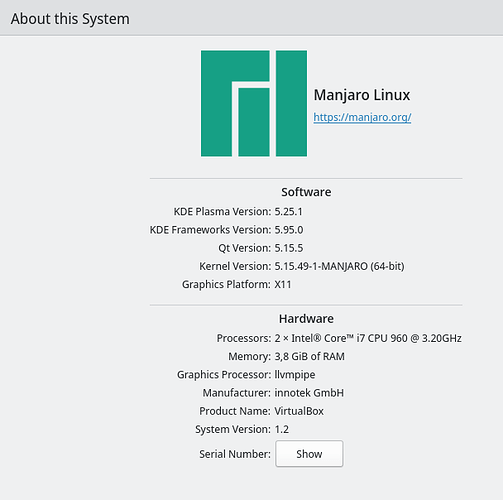 Useful in combination with LIBGL_ALWAYS_SOFTWARE=true for choosing one of the software renderers softpipe or llvmpipe … so you use that too?

What was the initial issue that lead you to force it to use it tho? It was this part?

Because i do full tasks and it did not break on me. Even installing the plasma-wayland-session and logging into it works 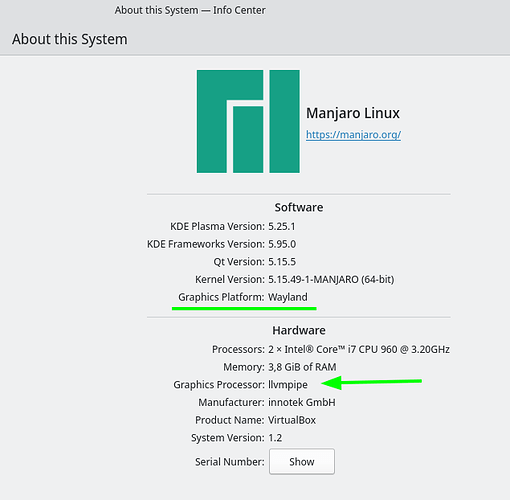 What crashes Kwin under wayland session on my end, on that VM install - is starting a GTK application. But normally i do not use wayland, not even on the real hardware … And the X11 session works just fine.

Make sure you are actually on X11 session and not Wayland, especially then forcing it to load like you do.

Now i’m tried with gnome edition, only need use virtualbox without 3D to system automatic use llvmpipe, but any other way to use llvmpipe show the problem, i’m tested in barebone and crash a lot.

Have any way to use softpipe in manjaro?

Now i’m tested with manjaro kde unstable to see if problem is solved in mesa update, but don’t.