Hi,
I’m trying to get Manjaro-Cinnamon to display sensor data (cpu temp, fan speed, ect…) in the panel just like I can in Mint-Cinnamon.

In Mint I have installed: lm-sensors, xsensors, and as an ‘Applet’ sensors monitor by claudiux

In Manjaro I tried the same, but the ‘Applet’ does not work? so there is nothing in the panel.
I tried replacing xsensors with psensors and that gives me a thermometer icon in the panel that when clicked opens a window with all the temps fan speeds, etc…

Is there a way I can get Manjaro to permanently display the temps in the panel like I can in Mint? Thanks

but the ‘Applet’ does not work?

How did you get/install that “Applet”?

How did you add it to the panel?

Is it not showing up at all - or is the “Applet” just not displaying anything?

I’m using the Cinnamon version of Manjaro, hence the interface is very similar to Mint-Cinnamon. 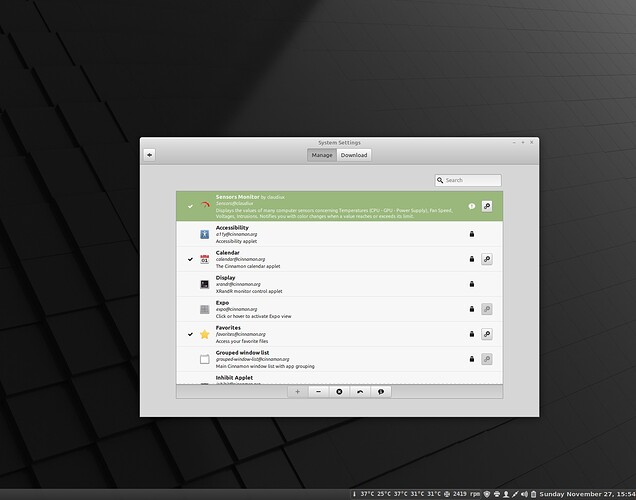 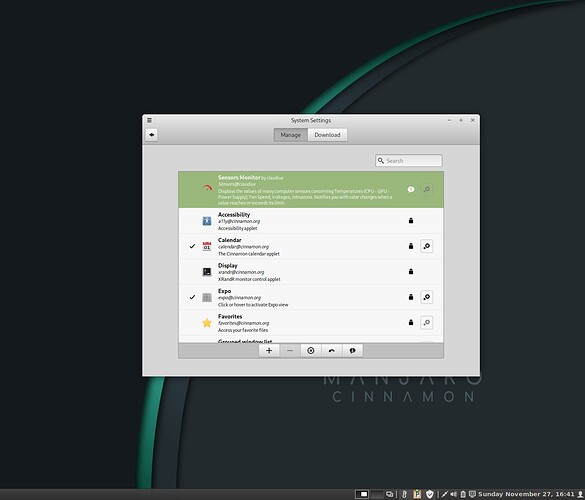 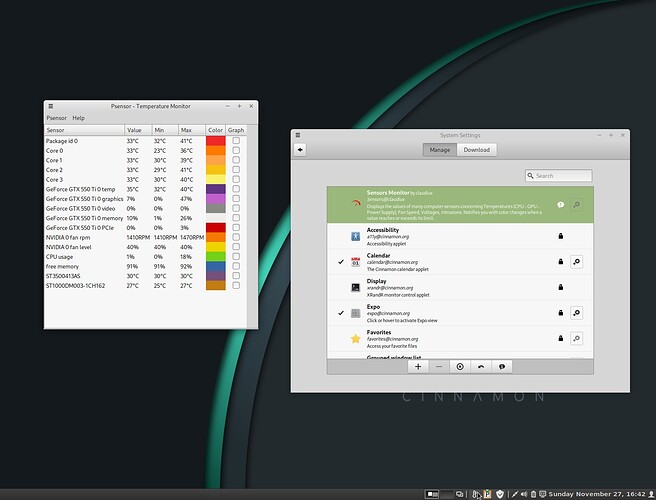 ScreenshotManjaroTemp21564×1192 160 KB
Screenshot 2 and 3 are of Manjaro-Cinnamon system where ‘lm-sensors’ and ‘Psensors’ are installed (xsensors did not work well) The applet ‘sensors monitor by claudiux’ is downloaded but can not be switch on (the cog is greyed out?) so all I have in the panel is a temp icon, clicking on this icon brings up the ‘Psensors’ window as seen in screenshot3. What I’m looking for is for an applet (or something else) that will permanently display the cpu temps in the panel just like under Mint.
Nachlese November 27, 2022, 10:10am #4

The applet ‘sensors monitor by claudiux’ is downloaded but can not be switch on (the cog is greyed out?)

My question aimed at:
where did you get that applet - how did you install it in Manjaro?

I cannot find it when I look in the repositories or in the AUR.

I have found this description here.
Seems similar to Gnome extensions being installed via a web service - for which to work a browser extension is necessary.
I don’t run Cinnamon and cannot test.

It’s not in the repo or AUR, it’s part of ‘Cinnamon spices’ probably only available with the Cinnamon DE
Anyway In my case the steps are:
Menu/system settings (control center)/click on ‘Applets’/this opens the window that you see in my ‘ScreenshotManjaroTemp1’ go to the Download tab, search for the app and click on the ‘install’ arrow. then go back to the Manage tab, highlight the app and click on add (the + button) and then you should be able to modify the app settings as needed. But I could not get that last step to work - clicking on the settings button (cog icon) nothing happens - furthermore, on re-start, cinnamon throw up an error that an applet could not be started!! hence my post here to see if anybody has a solution

You have to run a command to populate the sensors, not sure but thought lm-sensors printed this command at installation time.

sensors-detect
probably
and probably as root

I don’t know in Cinnamon, but in XFCE all I had to do was left click on the taskbar and under Panel add the sensors as they are listed there.

I solved my issue

I added another applet ‘Spices Update by Claudiux’ that triggered an update of ‘Sensors Monitor by Claudiux’ and after that I could configure what temps to display in the panel. Thanks all for your help.