I have an ASUS TUF Gaming F15 FX506HM laptop with the following configuration:

I disabled the built in monitor and am using the external monitor only as I frequently switch between my work laptop and this laptop using a USB switch.

However, I noticed that from the past few days, I’m getting random screen flickering. A surefire way is to play a 1080p video in YouTube but happens randomly all the time.

Attaching a video of it for reference: While the flickers are short lived, they are messing up the window positions and sizes and I have to resize the windows again, even windows from other workspaces are affected.

I saw a similar post and set my compositor’s vsync to full screen repaints. This reduced the frequency, but they still do happen.

I connected my monitor through HDMI if that helps. 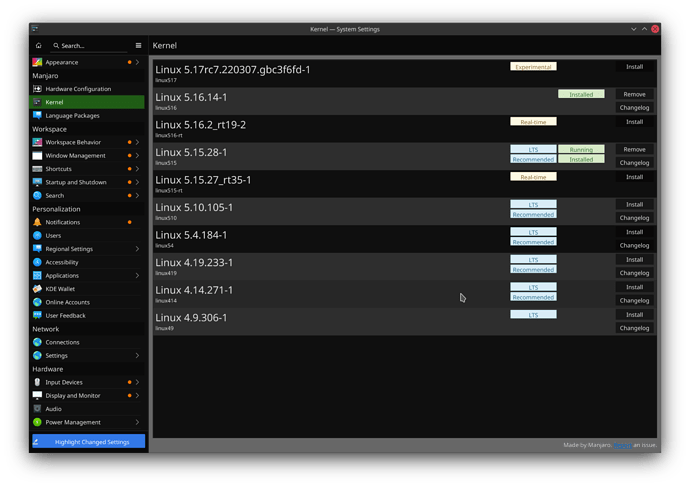 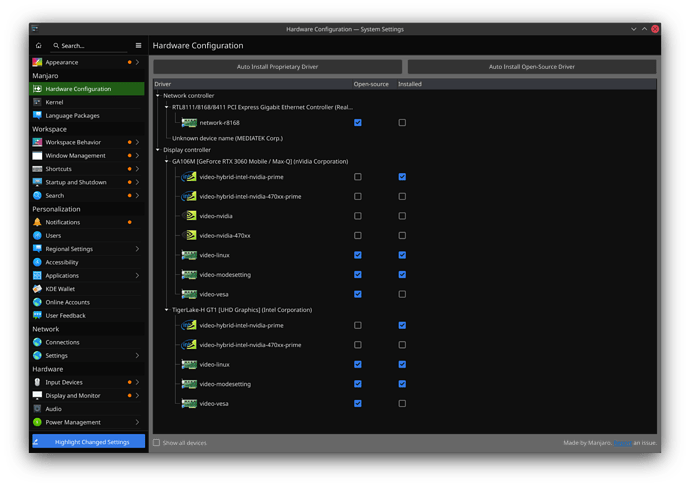 I tried to reinstall the drivers by clicking on auto install proprietary driver button, but still nothing happened.

How to resolve this issue?

Remove video-linux you don’t need it.
Start you browser or whatever application with:
prime-run application-name
for example, so is using the dGPU … and see if that causes flickering still.

When you change drivers, you have to reboot.
Also, check if you are on Wayland or X11 session.

I removed video-linux package and did a shutdown, but even after 10 minutes, it is hung on this line:

Should I force it to turn off?

It changed to this screen after 5 more minutes:

And it got turned off after staying there for 2 minutes. Let me start again.

If something is hanging, maybe from TTY try to force reinstall the drivers with:
sudo mhwd -f -a pci nonfree 0300

Ok, it started fine, but even without starting a program, it is flickering. Right at the start. Btw, I’m running Wayland as Xorg feels slow in response.

Btw, this is what inxi -G command shows me:

I’m still getting flickers right after booting into desktop, so I’m proceeding to force reinstall the drivers as you suggested.

ahm … well, feelings … who can argue with that

Wayland on KDE Plasma is still not there yet, especially with an Nvidia GPU in the mix. Flickering is a known issue and probably will be addressed in Plasma 5.25

After reinstalling the drivers and rebooting the system, there is progress. The flickers on the initial boot are gone. However, they’re still happening inside firefox when I’m playing videos at 1080p.

At this point, I can’t blame the drivers, since initial flickers are no more. Something is still off with firefox that when I tried to run it with prime-run firefox I see that it still is using Intel card and not switching to GPU 2. I have confirmed this by going into about:support page in firefox which is seeing Intel card.

Just to verify, I stumbled upon the Arch Wiki page and tried to run with env vars instead of prime-run by running:

and still I’m seeing Intel in the renderer.

Just to be sure I ran glxinfo with prime-run and I do indeed see the NVIDIA there. Also, I was able to play games in 4k resolution via Steam and no flickers there either.

I guess this is an issue with Firefox then, since they don’t have video acceleration yet and whatever was added in 91 was broken in 95 again.

ahm … well, feelings … who can argue with that

Wayland on KDE Plasma is still not there yet, especially with an Nvidia GPU in the mix. Flickering is a known issue and probably will be addressed in Plasma 5.25

I mean that I can see visible scrolling stutters in a lot of apps in 4k when on Xorg but on Wayland it is super smooth. I’m coming from the world of macOS (my primary machine is still a Mac) and that too since I’m a professional app developer I spend most of my time looking at high resolution designs in Figma. So it is kinda hard for me not to see the stutters.

I agree most won’t notice them. However, I can’t lower my resolution since when I switch from my work laptop to this one, it gets really noticeable and adjusting to different resolutions on the same monitor won’t be comfortable.

And oh, btw, sorry if my tone was in a complaining state. You guys were doing an amazing work, and thanks a lot for super quick replies.

Yeah, that is a way. Glad you find it and fixed your issue.

And oh, btw, sorry if my tone was in a complaining state.

Oh noo, no. You presented your issue perfectly and is understandable. The only thing i wanted to be sure is that the drivers got installed properly, and everything else was actually your good doing. Reason why i mark you comment as solution.