The aforementioned driver crashes my system, i have been experiencing this on multiple distributions since linux 5.12, the version that added support for the specific variant of my wifi chip. Is there a way to fix this or report that the driver is still buggy?

You can try installing it again if that help:

Is there a way to fix this or report that the driver is still buggy? 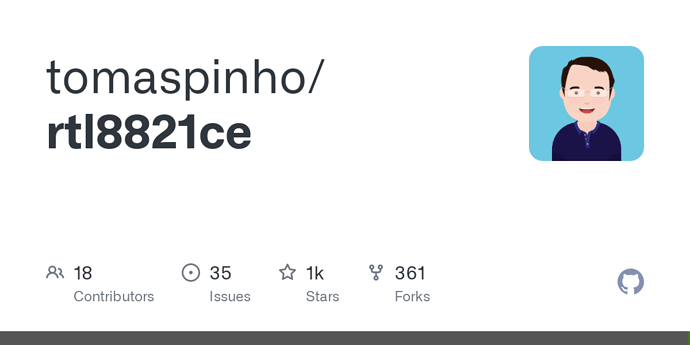 Contribute to tomaspinho/rtl8821ce development by creating an account on GitHub.

I meant to say the official driver for my wifi chip ( realtek RTL8821CE) is buggy. The custom driver used to work but has been crashing as well for a while now ( if it even still boots )

Internet does work via other means

Did you blacklist the kernel driver in favour of the driver from AUR?

I forgot to do so, now the AUR driver works, thanks! Now, i would still like to report the official realtek driver is sitll buggy, they should at least disable the driver on the wifi chip variants that cause it to crash

The issue was reported more than a year ago, would leaving a comment there be enough so kernel devs pays attention to the driver? It would be nice if it was fixed but at the very list it should be blacklisted on incompatible chip variants to prevent random crashes