I’ve a RockPro64 running on Manjaro Plasma that I bought especially to be connected to a VGA video projector. However the video projector seems not to detect a device is plugged.

With my Nintendo Switch I have to manually go into the settings, lower the resolution, plug the switch to the video projector then set the higher resolution back and I’m good to go, the image shows up with a nice resolution on my wall.

With my Windows laptop I don’t have any issues.

I tried to install xrandr on the RockPro64 and ssh to it while being connected to the video projector however when type the xrandr command it says can't open display.

Do you have any idea how to fix this issue and make Manjaro auto detect the correct resolution for my video projector? I can’t find anything on Google.

Thanks for your answers

PS: I’m a software developer but a Linux beginner, so please bear with me if this requires complicated tweaking

The RockPro64 does not have a VGA output. So how are you connecting it?

What resolution is the projector?
The RockPro64 HDMI port assumes 1080p, as that’s what it outputs.

Is there a way to force the HDMI port to lower the default resolution?
I really hope so otherwise my brand new RockPro64 would useless to me (or I would have to buy a new video projector)

Thanks for your answer

Note that I already tried while the RockPro64 was connected to an HDMI screen to lower the default resolution using the Manjaro Settings Manager. Then I plugged it to the video projector but it didn’t work. I guess doing what I did just lower the resolution for a specific screen but once it’s connected to the video projector it just comes back to 1080p.

Since xrandr isn’t working while being connected to the projector I don’t really know what would be the workaround to change the default resolution.

Ok so I just realized the can't open display message while using xrandr also appears when connected to an HDMI screen.

I found on a reddit comment that xrandr needs Xorg. So I installed it using pacman -S xorg then tried to run startx but I get the error message

And xrandr is still not working.

I’m starting to get desperate, more and more problems are accumulating and I don’t even know if I’m on the good direction.

I don’t know what your issue is, exactly, but xrandr, is part of the xorg-xrandr package.
You need to run the command from a terminal emulator on the screen in question.

Ok I didn’t know about this xorg-xrandr package. I first installed xrandr and later xorg when I figured out I probably need this package too.

True that I was executing xrandr through ssh even when my RockPro64 was connected to an HDMI screen. That might explain why I still get can't open display.

Ok so I managed to do it with xrandr however I later figured out xrandr applies a configuration per user. So the resolution is still 1920x1080p when accessing the login screen therefore the image doesn’t show up on the video projector and I can’t login…

So I tried to configure it at system level with a /etc/X11/xorg.conf file. 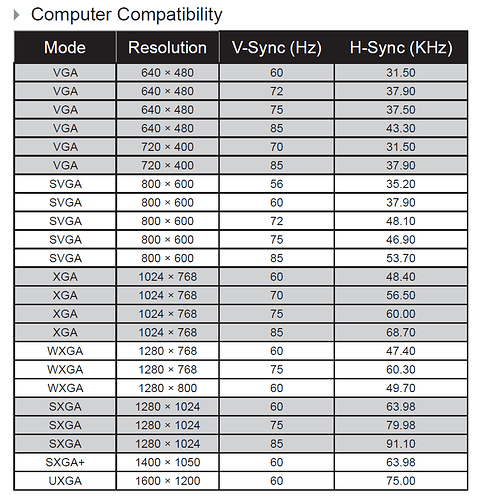 I noticed when my Windows laptop is plugged to the projector, for 2 seconds it’s written 800x600 60Hz so I decided to create a xorg.conf file as follow

At some point when the RockPro64 was rebooting I could see the image for a second and then nothing again. However that happened only twice and even if I rebooted with the exact same Xorg configuration it was not showing anything anymore.
I also tried to play with the DefaultDepth and Depth but nothing changed so I just commented it.

Later I tried another xorg.conf style but without any success

I’ve been trying different resolution with different HorizSync and VertRefresh but so far the best I got was a display for only one second.

Do you have any clue what is wrong in my xorg.conf file?

I tried to enable automatic login and set the resolution to 800x600 with xrandr. That way I don’t have to enter my password and the resolution automatically switches to 800x600 when my user desktop is loaded.
This is working well with a regular monitor but not with the video projector.

At last, I simply tried to plug my Pinebook Pro to the projector (didn’t think of it before). It’s also running on Manjaro Plasma, but of course it didn’t work.

That leaves me with no choice, I’ll have to try other OS on this RockPro64 otherwise this computer would be a useless item to me.

Too bad, I really like Manjaro, I don’t want to switch to another OS

Too bad, I really like Manjaro, I don’t want to switch to another OS

Sad to see you switch but arm devices are still not ready for such use cases.
If it was hdmi cable directly then it would have been a better scenario.

If this is working with another Linux OS then I could determine which exact Modeline is used then I can try it with xrandr on Manjaro.

Sadly I think there’s no way to check the Modeline on Windows.

I hope this will be successful at the end