Due to reasons I want to have a clean Manjaro Installation. I henceforth made a full Backup of everything I need, made a full “Drive to Image” everythingwentwrong.image with clonezilla, made some screenshots of KDE settings and was good to go - o boy did I pull a John Snow - I know nothing. My system drive is a fairly large nvme “disk” and I wanted to just reuse the current partitions, which are fairly straight forward: A 100MB UEFI bootpartition, a 100GB System partition (mounted to “/”) and the rest consists of /home.

First try:
I just copied the latest KDE minimal ISO into my ventoy drive, booted from it and started Calamares as soon as KDE was up. Calamares presented me with the correct option - reuse partition. Even the desired “reuse /home” was available, strike, I am good to go. But wait, what is this? "bootimage will be installed on “/dev/sdc” stood there under the partition select dialogue. Which would made my system unbootable without /dev/sdc, which happens to be my ventoy drive - or wouldn’t it? Break!

And now I am a bit stuck - how do I continue from here one? I want to replace my / and my /boot/efi and keep everything else. Ain’t possible with Calamares?
I tried to find a guide how to perform such a basic task and failed to find something useful, so I’m once again asking for help.

You can select what partitions to reuse, reformat (if needed), and how to mount, using Manual partitioning. Free download page for Project Manjaro Linux's Manjaro-User-Guide.pdf.Manjaro is a user-friendly Linux distribution based on the independently developed Arch operating system. Within the Linux ...

Yeah, sure, that is what I would have ended up with anyways, but this seems to be a very easy thing to do - Calamares has everthing to go, why does it not allow me to reuse /boot/efi on the already available FAT32 partition on the selected drive, but instead insists on putting it on the one from which I booted into the installer? Seems like a bug ore something that was just not completely done right - either by the programmer or by the user (me). Imho the assisted installation should support something basic like this?

why does it not allow me to reuse /boot/efi on the already available FAT32 partition on the selected drive, but instead insists on putting it on the one from which I booted into the installer?

AFAIK you can select which drive to put the bootloader on.

If so then it was not in my case. I could select the partition where I want to install Manjaro into (“/”), and afterwards also could select to retain my /home, but /boot/efi did not have such a dialogue or option, was also marked as “unchanged” and under the selct “boxes” was the hint that /boot/efi would be installed on /dev/sdc, that was all. Which just seems wrong/buggy, or I am with stupid…

Yes I do, this for selecting which device the system should be installed to, and I can select all of my drives with this selector. Default selection is the correct nvme disc in slot one (physical on my mainboard, that is), but changing anything with this selector does not change the behaviour of where the boot loader is installed to. I don’t have a selector for it, it is just the notice where this will be installed to, no interaction possible. I will boot again into Calamares and provide some screenshots of it later on. Thanks for your assistance so far!

So here go some screenshots. Calamares in the device selction: 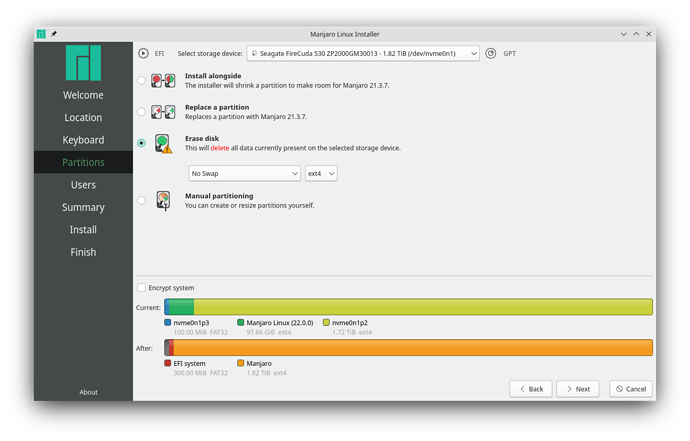 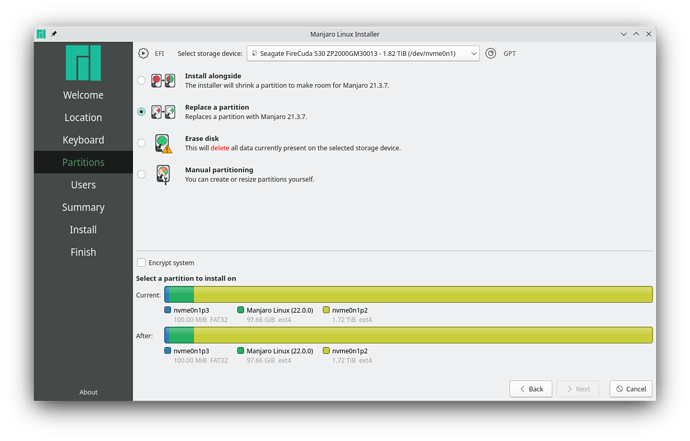 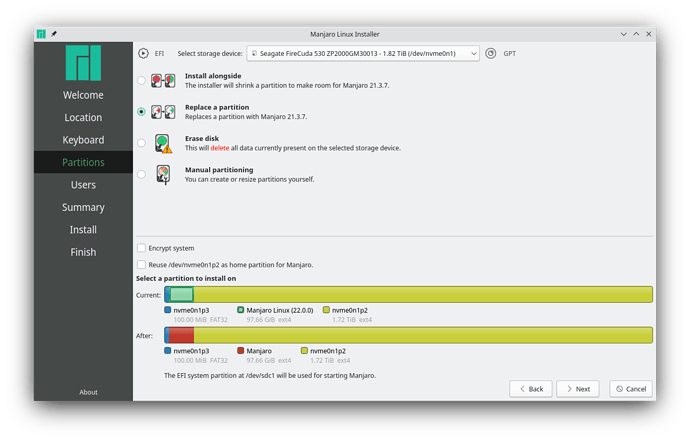 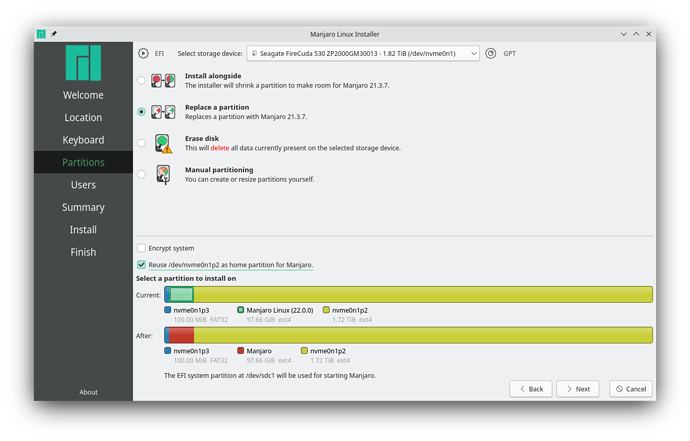 calamares_replace_selected_partition_reuse_home1323×847 92.4 KB
There is no selection or changing of the bootloader install location possible. Seems… wrong. My approach would now be to install it this way and somehow fix the bootloader. But this seems wrong from the get go - having to hassle with it before it even is installed is the opposite of what I would describe as “sane approach”…
robin0800 November 17, 2022, 11:04pm #9

Use manual Partitioning, the last option on the screen.