After working fine for several days (after a series of crashes immediately after the last big update), my Plasma desktop on my main desktop PC has stopped working entirely. (I’m currently on a spare laptop, also running Manjaro-Plasma.) The usual cheerful green text scrolls upward as normal until it gets to here:

Then nothing further happens. The Plasma log-in screen fails to appear and I’m left staring at those final 6 lines of text forever.

I can ctrl-alt-F2 and log-in to a terminal interface. I can run system commands, edit files, etc. So the core of the operating system is working. But the GUI part of the OS won’t launch.

Is there some way to force Plasma to start from the command line?

And is there some way to set it to start automatically? (I mean, clearly there is, since it’s been starting automatically for weeks. But I have no idea where the setting for that is. That appears to be what’s broken.)

Sure - you can do start x if you get to a console.
Maybe start with mv ~/.config ~/.configOLD to get a fresh start.

After getting a desktop up, then rebooting would see if it’ll work normally…

Then you open dual pane Dolphin with [.config | .configOLD] and start moving folders back, and slow down when copying those config files - khotkeysrc was one that messed mine up (more specifically mouse gesture code had got messed up I think - an old khotkeys from a backup fixed that).

Layout is another one that can mess it up…

Having said that, it’s still not great. I have some new ‘alias’ or ‘abbr’ commands ready:

If I do right click + Add Widgets I’m getting nothing - just waiting for something else to dump and crash now. Toying with the idea of using an older image to install Plasma and pin it back to Plasma 5.24 - but despite the bugs it’s still kind of working mostly…

Ok, I tried startx, and though that failed, it left some very interesting error messages, inviting me to look at some log file at /var/something/something/xorg/something. In that log file, it said “Starting VESA display drivers. FAILED. No compatible display device found.” Ummm. Ok. So I asked myself “Why is that driver even there???” So I googled for “remove display driver” and the very first hit said “mhwd -r pci vesa_something”. So I did that and restarted, and voila, system now works!

So, yeah, your “startx” suggestion led me indirectly to the solution.

And now I realize the cause! Last night at 3AM, just before going to bed, I was mucking-around with systems settings, and I apparently enabled some drivers I shouldn’t have. Serves me right for messing with system settings while groggy.

Despite it being BLOATED and saving much more than it needs to, I must testify that PlasmaConfigSaver is also a fix. 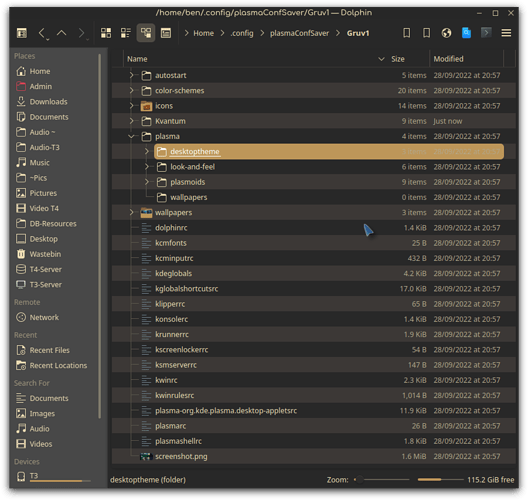 Also gives you another key to follow for troubleshooting and comparing to current configs.

There’s a problem finding this widget - although it’s called ‘PlasmaConfigSaver’ you must actually search for ‘customization’. 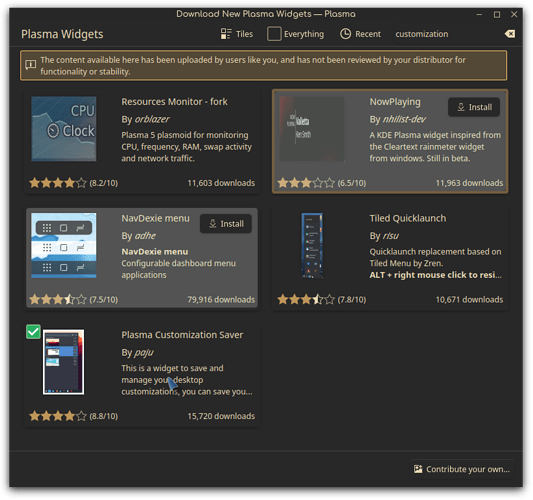 Comparisons are invaluable - as I said before, kglobalshortcutsrc was an issue in the past.

So now I load up my problematic Plasmaconfig folder, and a good one.

First I notice my latest ones (I just re-entered the Max Horizontal and Vertical shortcuts and added them to a mouse gesture):

Then I noticed some other changes - which didn’t look good - and used the arrows to push those from the ‘good’ to the ‘problematic’ config. Save, exit… Plasmaconfigsaver load (bad config) log out>log in.

For some reason this fixed Plasma - for now.

I think this is a nicer workflow than deleting/renaming the whole .config folder…